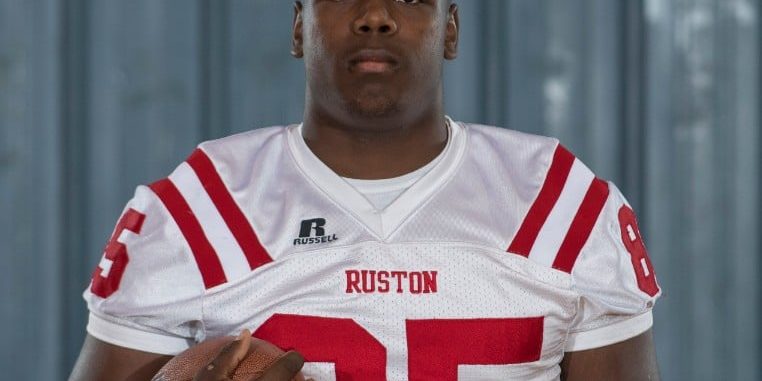 When someone thinks of the surplus of talent in North Louisiana, the usual suspects are programs such as West Monroe High School, Evangel Christian Academy, and Neville High School. However, Ruston High School has only lost four games in the regular season in the last two seasons against some of the toughest competition in North Louisiana. Specifically, Ruston’s offense has been the anchor of the team with players such as fellow Louisiana Football Magazine feature and Grambling signee Donald Johnson. Along with the wide receiver, the offensive unit was led by one of the most intriguing prospects in the state of Louisiana over the past couple of years in upcoming senior Ray Parker. Throughout his experience playing football, Parker received the opportunity to play on both sides of the ball since beginning at a young age.

“I started playing football when I was in the seventh grade,” Parker said. “When I first started, I played defensive end and then switched to tight end.”

Parker managed to incorporate his many skills to develop into one of the state’s top offensive tackle prospects. His quick feet and rapid hands have allowed him to obtain an advantage over most of the players across for him on the line of scrimmage. Quickness and speed translated to not only the football field, but on the hardwood as well. Over the course of his time at Ruston High School, Parker spent some time playing basketball and enjoyed what the game brought to him. However, his future came back to football.

“Over the years, I’ve played basketball as well as football, but football is my main focus,” Parker said.

Parker has embraced and relished the moments he made during his high school career as a football player. He created memories with his teammates he will never forget and those made his career worth while. These memories go hand and hand with the stiff competition Ruston played in its area.

“My best memories of playing football is when I scored my first touchdown and hearing my name get called,” Parker said. “The best games I enjoy the most is playing Neville and West Monroe.”

As perennial powers and threats to the state championship every year, it is no surprise facing these programs stood out to Parker as significant matchups. Players typically see these games in particular as opportunities to help build programs’ reputations.

“The one thing I will miss about high school football is playing with the guys I grew up with,” Parker said.

Once getting to the next level, Parker is expected to continue playing at the offensive tackle position. Parker has already been offered by LSU and is receiving attention from other programs as well. Louisiana Football Magazine’s recruiting expert Lee Brecheen believes that the sky is only the limit for the four star recruit.

“In my opinion watching Ray Parker play in 2 games in 2017, I believe he is a more athletic version of OT Cameron Robinson (West Monroe High School/Alabama/Jacksonville Jaguars) once he learns the position in college,” Brecheen said.

Once football is over, Parker plans to start his own store with the support of his friends and family. He says he owes his success to mother, coaches, and the community because of the support they showed him through everything.