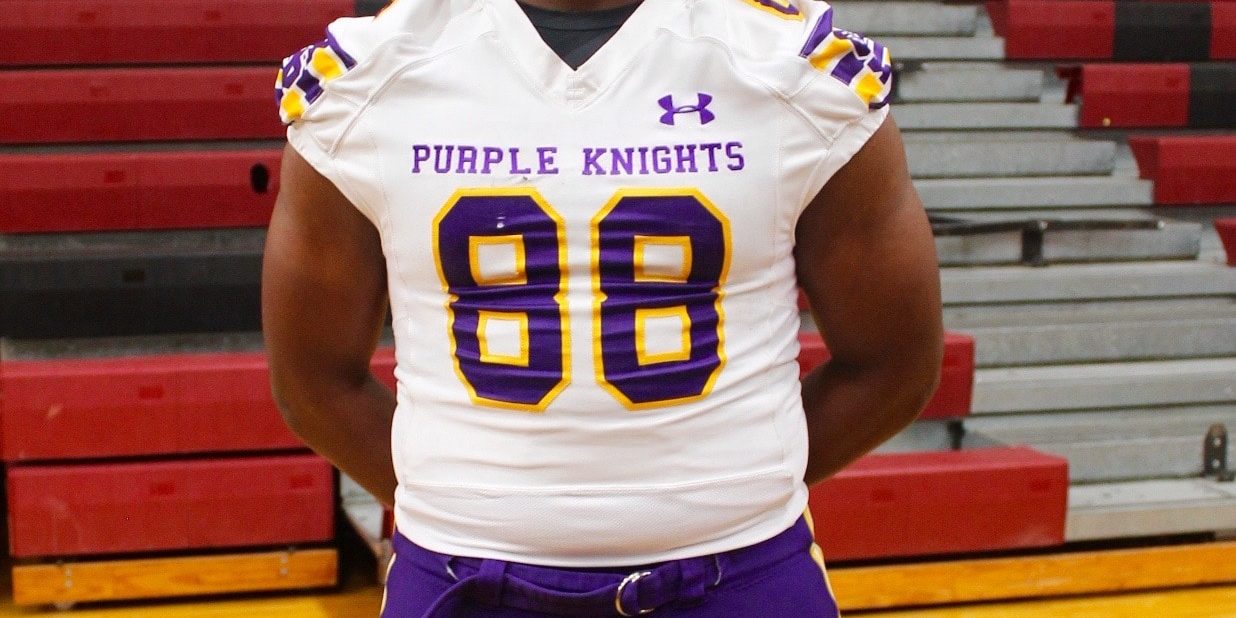 It is not often that somebody is called the best pass catching tight end not only in this year’s class in the state of Louisiana, but in the entire country. That recognition belongs to St. Augustine senior TE Keith Settle. Settle may not be as tall as some of the other tight ends in Louisiana as he is only listed at 6-1, but he is an athletic specimen that has some of the best hands in the state and has great speed to go along with that. Settle does a great job of attacking the football like he is a 6-4 wide receiver. He can also line up anywhere on the field because of his versatility as a tight end. It helps a lot when the quarterback can dump it off to a tight end like Settle, who can catch anything in his radius and make plays after the catch. Last season, Settle proved to be one of Justice McCoy’s (Colorado State) top options racking over 300 yards and six touchdowns. Not only is he a great athlete, but he is a great student as well with way over a 4.0 GPA. Louisiana Football Magazine’s recruit expert Lee Brecheen likes a lot what he sees in Settle especially with what he can do in the passing game obviously.

“Keith Settle is the best pure pass catching tight end not only in the state, but in America,” Brecheen said. “I know this from my scouting over the years. Settle is only 6-1, but he runs a 4.6/40 and his hands are a lot better than most wide receivers in Louisiana. He can play in the SEC and reminds me a lot of the recent South Carolina tight ends that are short and stocky.”

Brecheen went on to say that Settle could be a perfect fit at LSU in Matt Canada’s offense with the way they use the tight ends and H-backs in short intermediate throws. So far, Settle has not received any offers from SEC schools, but his top schools are some of the most prestigious in the country such as Howard and Stanford. Not only will one of these schools get a great addition in the gridiron, but they will get one in the classroom as well. In today’s recruit spotlight, we caught up with the All-District tight end as he talked about being recognized as one of the best players at his position, adjusting to a new quarterback, his top schools, and so much more!

My name is Keith Settle; 17 years old; I play tight end/WR; and I play for St. Augustine High.

LAFM: Our recruiting expert Lee Brecheen said that you are probably the best pure pass catching tight end in the state and one of the best in the country this season. What does that mean to you to be recognized as one of the best at your position in the state?

It feels great, and I am honored to be recognized as one of the top tight ends.

I think my biggest strengths are being versatile. Being able to catch and make plays while being able to block pretty well.

I think I need to improve my blocking schools and get stronger so I can compete with linemen.

I intend to major in Computer Science.

LAFM: You played for one of the best quarterbacks in the state last season in Justice McCoy, but now he is gone. What is the difference between McCoy and this year’s QB Dwayne McGill and what has the adjustment been like between one quarterback to the other?

It’s been a little different catching the ball from a different quarterback, but Dwayne is a great quarterback and I’m happy with him.

LAFM: The Purple Knights had a good season last year making a pretty good playoff run. What does the team need to do in order to take that next step and compete for a state title this season?

To make a legitimate run we need to be more discipline and focus more.

LAFM: It seems that the team is always playing great teams every week and the team has a play another one in Brother Martin this week. Is there a favorite team that you like to play against in the Catholic league and if so, what is it and why?

I like to play John Curtis. They have a great team, and I love to see two great teams match up to in battle during a game.

LAFM: Who are some tight ends that you model your game after and why?

I model my game after Rob Gronkowski (Arizona/New England Patriots). He is very dominant and is a known force on the field at all times. He can run routes, go for the jump ball, and block very well.

I think my best game was against John Curtis last year. Although we lost, I had a key touchdown, two point conversion, and fourth down conversion.

After football season, I like to work out and focus on school work. I may play another sport after the season.

Well I plan to work towards a comeback this season after hurting my knee.

LAFM: You are playing for one of the most prestigious high schools in the country when it comes to producing NFL players. What does it mean for you to play for a great program at St. Augustine?

Playing for St. Augustine is an honor. I have nothing but pride when I step on the field knowing who I am representing

I thank my parents for supporting me through all I have done with football.

LAFM: What are the biggest stats and accomplishments that you have had over your career?

Last year I had over 300 yards, 6 touchdowns, and I was named second team All-District.

LAFM: You do not get talked about as much as other tight ends in the state like some of the other guys, but you are one of the top players at your position. Do you feel that you are underrated and what makes you stand out from everybody else as a football player?

I think I am underrated but I feel what sets me different is how versatile i am from a blocker to a pass catcher.