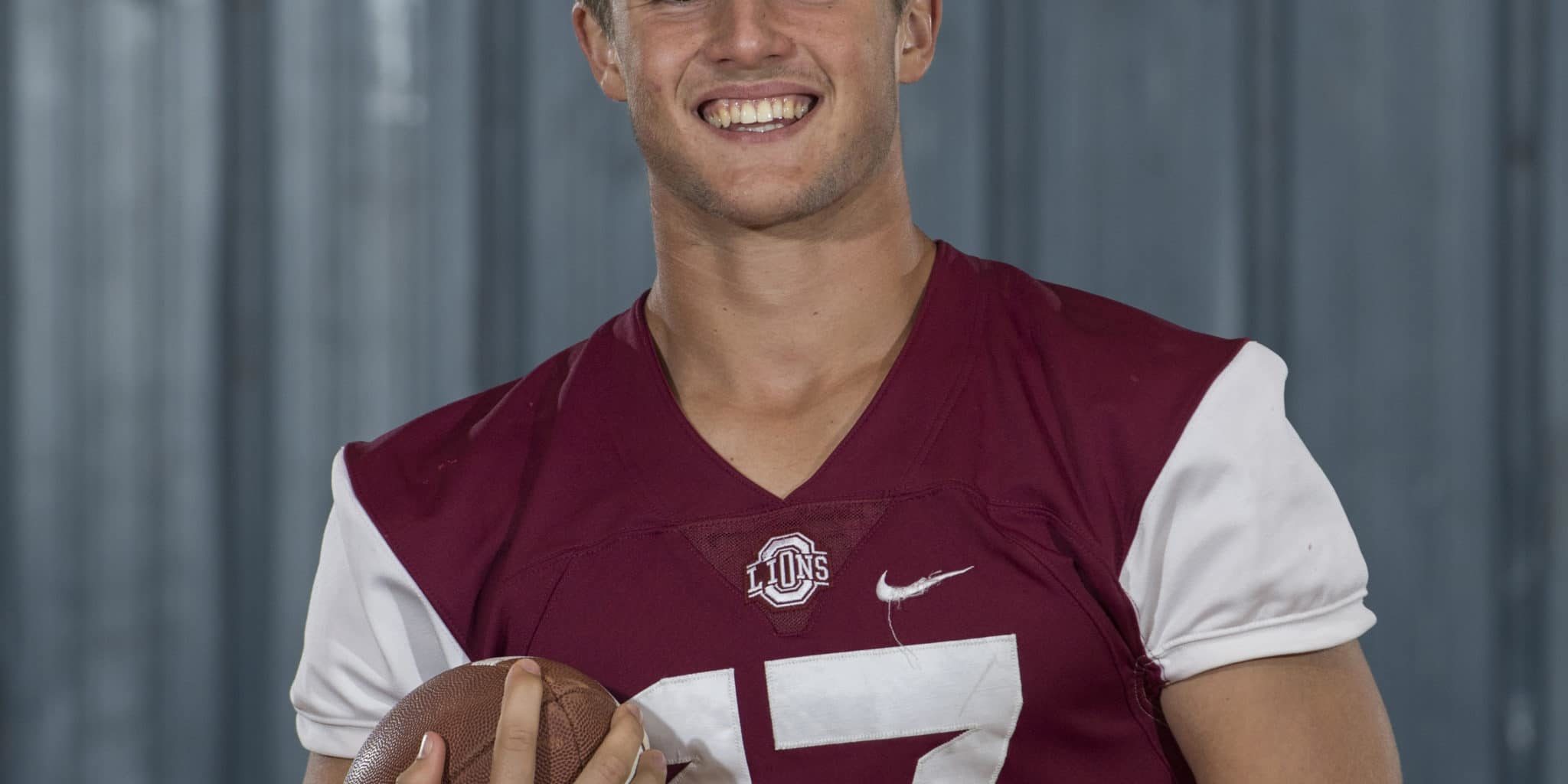 Last season, The Ouachita Parish Lions had a 7-6 season, but do not let that record fool you as the Lions had to play arguably the toughest schedule in the state playing against state championship contending teams such as Neville, Scotlandville, Ruston, West Monroe, and that is just some to name a few. For this season, the Lions lose arguably the greatest quarterback in program history in De’Vion Warren, who was responsible for almost 6,000 yards and 75 touchdowns throughout his prep career. Warren is now with the Arkansas Razorbacks. Even with the loss of a dynamic playmaker like Warren, Lions fans should be very confident for an improved season with great athletes like Jabari Johnson and a talented offensive line that is led by their great blocking tight end in Jake Hammond. With that combination, the offense might not lose a step this season. Hammond is one of the best tight ends in North Louisiana. He is best known for his blocking but he can go out and catch passes as well. What makes Hammond special as a blocker is that he can block one guy, get him out of the play, and then find somebody else to block. He is a player that is always looking to pancake linebackers and defensive backs. When #17 comes their way, defenders definitely know to get out of the way. At 6’2, 235, Hammond has the power to be a dominant blocker in the run game, but at the same time, he has the athleticism and hands to be a threat in the pass game. Louisiana Football Magazine Editor/T.V. Host Lee Brecheen had this to say about the talented blocker from Ouachita Parish.

“Jake Hammond is one tough player and a heck of a blocking tight end,” Brecheen said. “He is an extension of the offensive line and at the same time, can catch as he has good hands.”

He is capable of being a DI tight end and was recognized by us in the pre-season on our All-North LA team and is even on the cover of our North Louisiana edition of the magazine, but surprisingly, he has not had a football scholarship offer even though he has received some interests from schools. Most impressive that he has been heavily involved with athletics and at the same time, is highly successful in the classroom with his 4.0 GPA. If colleges come see this senior tight end play, then, there will be a lot of offers that will be coming Jake Hammond’s way because of the impact he has as a blocker and his unselfishness to do whatever it takes for the success of the team. In today’s recruit spotlight, we caught up with the Ouachita Parish Tight End/H-back as he talks about last season, his thoughts on being on the cover, the wide range of music that he listens to, and so much more!

LAFM: What are some of the schools that you have received either offers from or have shown interest in you so far?

At the time, I have no football offers, but have been in contact with Stanford, ULM, Louisiana Tech, and Memphis.

Being recognized as one of the best players in the state heading into my senior season is truly a honor. It is truly a testament to my hard work and prayer so I am extremely grateful.

The biggest strengths in my game are my strength, my ruthless effort to the whistle, and my hands.

I have been working on my speed, route running, pass blocking, and hand positioning this off-season.

LAFM: As a tight end, you really go after people when you block. A lot of tight ends rather catching the football than blocking and  a lot of guys rather block than catch the football. Do you enjoy more catching passes or blocking more?

It may come to a surprise, but there is truly nothing more enjoyable than blocking. Because of all the weights and technique work I go through, there is nothing more satisfying than putting someone on their back.

LAFM: What are the stats and accomplishments over your high school career so far?

We set the school record for rushing yards, total offense as well as making it to the second round of the playoffs. Also, I was a first team All-District selection, All-NELA selection, and selected to first team LSL All-State.

LAFM: In speaking of last year, the team only went 7-6, but the team went to the second round and played one of the most difficult schedules in the state in the process. What are your thoughts on last season and what was the toughest team that you played against last season and why?

Last year was truly a blessing getting to play with my best friends and being able to be coached by the staff that we have. Our toughest opponent was West Monroe. They have phenomenal talent and were very well coached. I am very excited to play them again this year.

As excited as I am to play every team on the schedule, I am especially excited for area rivals Richwood, Neville, and West Monroe.

LAFM: Who is a college or NFL tight end that you model your game after and watch film on?

As much as I like to think that I have my own unique style of play, I love the aggression and swagger that Rob Gronkowski (Arizona/New England Patriots) plays with. While he is more documented for what he does as a receiver and after the catch, his physicality is inspiring and something I like to model my game after.

LAFM: What is the best game of your high school career so far and why?

I think the best game of my high school career so far is our first round playoff game against Walker. We produced a school record 861 yards of total offense, and I was able to help in the run game with my blocking all over the field.

When the football season is over, I immediately transition to baseball and begin to throw and workout with my teammates.

My goals, for the season, are obviously to win a district and a state championship as well as to be a leader and the best teammate that I can be.

LAFM: What is your message to the Ouachita team and the fans for this season?

We have had the best spring/summer of preparation that I have been a part of since I have been in high school. It’s going to be a special year.

I most importantly want to thank God because without prayer and blessings he has given me, nothing would be possible. Also, I want to thank my parents and brother for continuing to support me no matter what. Finally, my friends and teachers at Ouachita, who have been like family since my first day of high school.

I listen to about any type of music. I can seriously jam to anything from Britney Spears to 21 Savage. It all depends how I’m feeling.

LAFM: What makes you stand out from all the other tight ends in the state this season?

I don’t quit until the whistle blows. I’m on my man driving him as far as I can.