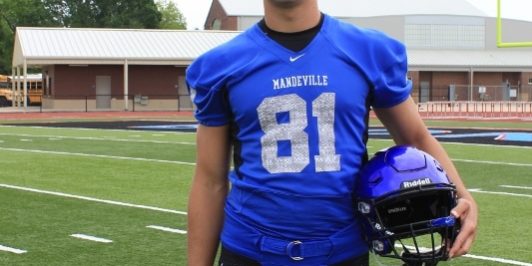 There are many kids that look up to their head coaches as their main father figures in their life. This is especially the case for Guy Lecompte Jr. as he is the son of longtime head coach Guy Lecompte Sr. Guy Lecompte Jr. not only got to experience playing high school football at the highest level in the state, but he did it playing for his dad.  The Mandeville Head Coach’s son was a great complement to him because his son was a great leader and was like a coach on the field. Lecompte Jr. may have never put up crazy statistics and numbers, but he definitely was a productive football player and a complete tight end for the Skippers. Over his career, he was used primarily as a blocker, but when he did get the chance to catch the football, he was really productive and a go to receiver whenever the team needed him to produce. He is also very athletic and was a two sport athlete during his high school career.  What separates players from being good and great is what they are willing to do for the bigger picture and help the team win. That is exactly what the Skippers did during the reliable senior tight end’s time at Mandeville. The Skippers posted winning seasons and made the playoffs during all three years especially in Lecompte’s junior season when the team went all the way to the semifinals. This year’s team captain for the Skippers made sure that his teammates were getting the job on the field while his father was leading them on the sidelines. The father-son duo proved to be a great combination for the Skippers over the last couple of seasons. Guy Lecompte Jr. will take after his father and will play football at the next level, but this time, it will be for the Northwestern State Demons. In today’s article, we caught up with the Northwestern State signee as he talked about his high school career, playing for his dad, signing with the Demons, and so much more!

LAFM: What are your stats and accomplishments while at Mandeville?

LAFM: You have signed with Northwestern State to play college football at the next level. What is it about the Demons that has attracted you to play football there?

Definitely the coaching staff. They have stuck with me since the beginning when they offered me.

My ability to block and my route running are my biggest strengths.

I need to work on my releases.

LAFM: Who is the college or NFL tight end that you model your game after and why?

I try to model my game after Rob Gronkowski (former Arizona TE currently with the New England Patriots) because he makes great plays as a receiver with his good route running, and he’s also a physical blocker.

LAFM: What was your best game while at Mandeville and why?

My best game at Mandeville was probably the Scotlandville game my junior year because that was one of the closest games I’ve ever played, and I made some key blocks to help my teammates score.

LAFM: Last season was a pretty good season as the team went 7-5 and made the 2nd round of the playoffs. What are your thoughts on last season as a whole?

I think that we had a good season. We didn’t finish nearly where we wanted to finish, but we overcame a lot of obstacles and we became closer as a team every week.

I think my whole team deserves a shout out because even though I couldn’t play my senior year, they still made me feel like an important part of the team.

My advice is that every team is going to go through some kind of adversity or challenge and it is how you handle it that determines if you are going to have a successful season.

LAFM: If you had to play one more game at Mandeville, who would it be against and why?

It would probably be John Ehret because that was my last high school football game and it was in the semis. It was just an overall fun and physical football game even though we didn’t have the outcome we wanted.

It is definitely an experience that a lot of kids can’t say they have had. It has it’s up and downs but i wouldn’t have traded it for the world. He has taught me so much and has pushed me to be the best that I can be.

My dad played for LSU.

My parents, I wouldn’t be where I’m at now if it weren’t for them.

LAFM: Why should Demon fans be excited to have you on their football team?

They should be excited because I’m going to give it everything I’ve got, and I won’t let them down.