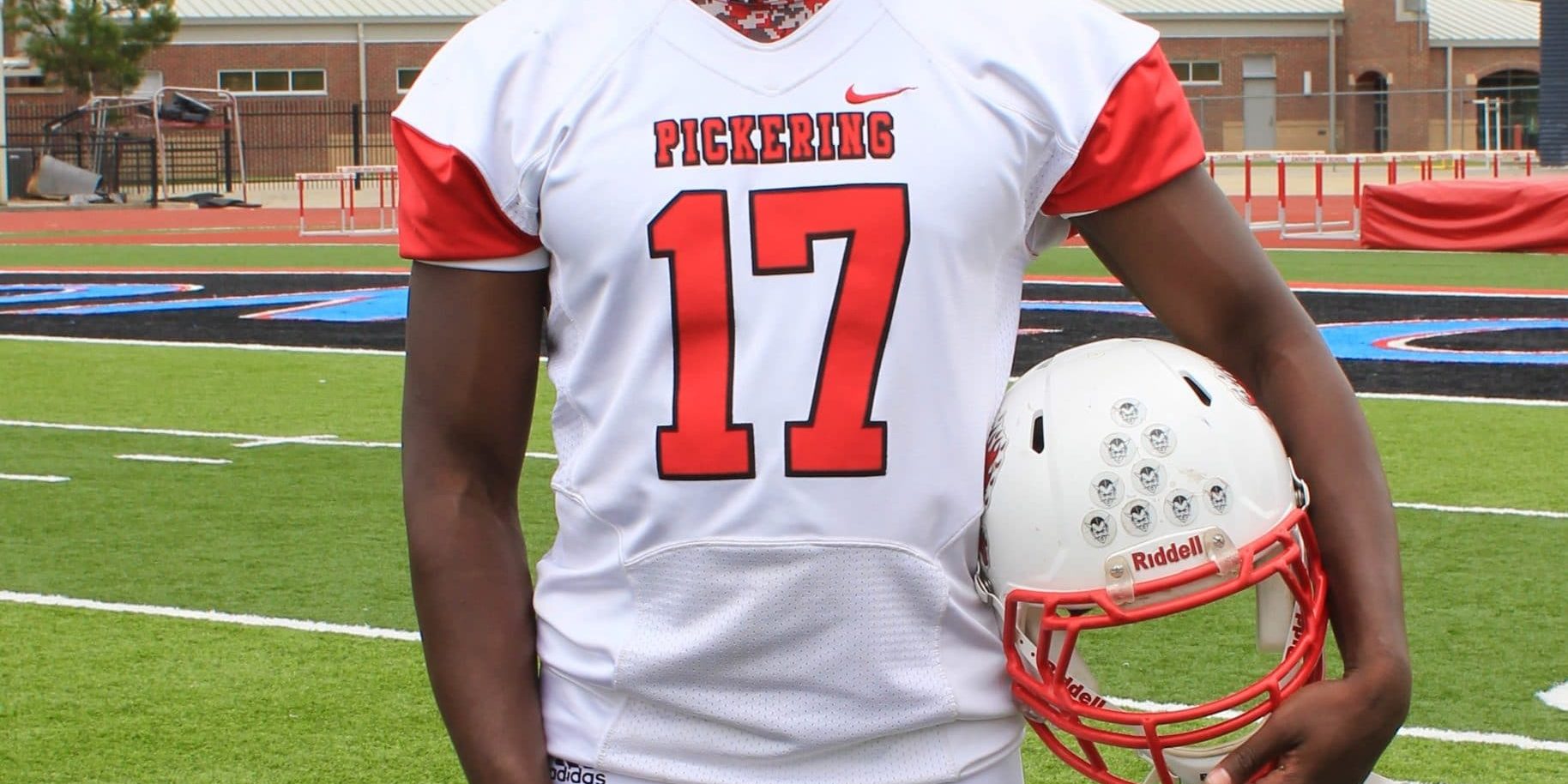 In today’s age of age, tight ends are now being spread out and being used as big receivers. Pickering senior TE Dontay Hargrove is one of those players that fits that description. At 6’2, 220, Hargrove is a big target that uses his size to put himself in great position against smaller defensive backs. Hargrove is a nightmare for defenses as he is quick enough to run routes against linebackers and is too big to match up against cornerbacks in coverage. Over his Pickering career, the versatile tight end has gathered up 4,000 total yards of offense as well as gathering many All-District and All-State honors since he was a freshman. Not only is Hargrove one of the most successful football players to come out of Pickering, but he is one of the best athletes to come out of the school period. When Hargrove was not torturing defenses on the gridirion, he would be one of the best shot put and javelin throwers in the state as well. The two sport athlete was a two time state champion in track. Before the season started, he was named to our 2nd All-Louisiana team as a wide receiver even though he is listed as a tight end. That comes to show how talented the senior Pickering athlete is. Louisiana Football Magazine Editor/T.V. Show Host/Scout Lee Brecheen compared Hargrove to a very familiar name to Louisiana football fans.

“Dontay Hargrove is one of the best big receivers in the state,” Brecheen said. “Hargrove is already about 220 at 6-3, but this kid might end up being a tight end if he grows even more in college because he has the body to grow to 240-250. He is so good at using his frame. He is built like Rueben Randle (former wide receiver for Bastrop, LSU, New York Giants and Philadelphia Eagles WR currently with the Chicago Bears). Randle was built around the same size as Hargrove when he was coming out of Bastrop High School. He is a guy that I think anybody would want because he can run a 4.5/40 and still do it even if he grows over 240 pounds.”

The team that kept their eye out on Hargrove, during the whole process, was the McNeese State Cowboys, and in the end, it was the Cowboys, who would pick up the offensive threat from Pickering. In today’s article, we caught up with the McNeese State signee as he talked about his high school football career, his favorite memories playing for Pickering, the reason why he signed with the Cowboys, and so much more!

LAFM: What are your stats and accomplishments while at Pickering?

My strengths are being dependable and durable as well as being a X-Factor, a hard worker, and a fast learner, .

I need to work on being more consistent as well as my speed and alignment. There is always something to improve on.

LAFM: In the end, you decided to sign with the McNeese State Cowboys. What helped you make the decision to spend the next couple of years playing football for the Cowboys?

Well, I wanted to surround myself with a homelike environment so they fit right in. It’s just like Pickering. They have a good coaching staff and everyone over there loves to win. The teammates seemed as if they were family. Also, it was close to both of my homes in Wharton, Texas and Pickering so I could see both sides of my family at the games.

LAFM: Last season, the team had a really good season going 8-4 and a second round playoff appearance. What are your overall thoughts on last season as a whole?

Last season wasn’t that exciting for me. I didn’t really get the ball as much as I wanted to so I just played my role and tried to help the team wherever I could. We had a good run, but we got caught up with not staying disciplined, and that’s when we fell off.

My advice, for next year’s team, is Rule #1: Stay Disciplines. Rule #2: Trust what the coach is telling you.  Rule #3: stay humble, keep grinding, and show your opponents why you deserve to be playing at the next level. Rule #4: That’s your family. Take care of them. Finally, Rule #5: Coach Wiggins always says “When in doubt, knock ’em out!”

LAFM: What was your best game while at Pickering and why?

My best game was against Many High School during my junior year. It was a great defensive game for me. I forced three turnovers, two fumbles, and kicked an onside kick and recovered it.

I like to get ready for track, lift weights, fish, and spend time with family and friends.

I’m going to miss being by my teammates and my friends from other teams, but most of all, the bus rides home and the rap battles we had.

LAFM: At the beginning of the season, you were named to our 2nd All-Louisiana team. What does it mean for you to be recognized as one of the best players in the state at your position?

LAFM: Who was the best player that you faced against and why?

The best player, that I played against, was around my freshman and sophomore year. His name is Xavier Diaz (former Many DB currently with ULM). He is explosive, a game changer, and you can’t guess his next move on either side of the field.

LAFM: What does it mean for you to play football at Pickering?

My brother Calvin Lowery played until he got in a car accident that messed his back up, and he couldn’t continue his career. My other brother Devin and my cousin Marcus Melton played for Prairie View.

LAFM: If you had to play one more game at Pickering, who would it be against and why?

It would be against Rayville High School because I had five or six catches for over 120 yards and a touchdown, but our defense was not where it should have been, and that was very costly for us.

LAFM: Why should Cowboy fans be excited to have you on their football team?

They should be excited because I am and will be the all-around athlete they have ever seen. I am electric, a show stopper for the other team, and I will help the team build and succeed starting my first day on campus. I will show them why I deserved and how I earned the right to say I’m a McNeese State Cowboy!