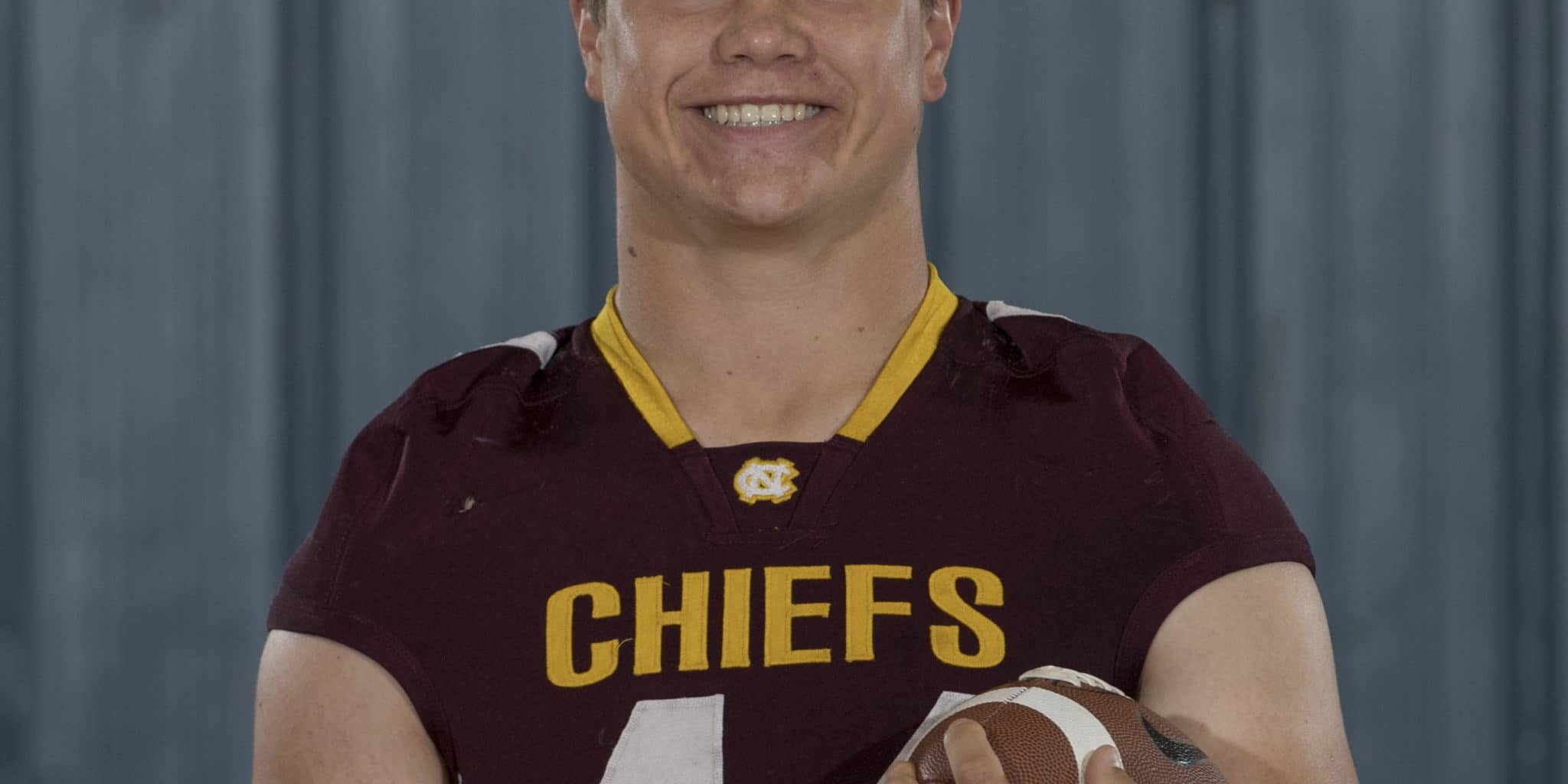 Natchitoches Central has had a tough time winning football games over the last couple of years even though the team has had a couple of playoff appearances. It is hard to win games when you are in a district playing against powerhouse programs like Ouachita, West Monroe, Ruston, and Alexandria. In order to be successful in one of the toughest districts in the state, you need to have some tough players when you play teams in North Louisiana. Having tough players on defense is always a plus, but when you have tough physical players that are playmakers on offense like Joshua Fortenberry, that will give you a chance to win a lot of games. For the Chiefs’ case, having Fortenberry will allow the team to compete in those types of games. Fortenberry is one of those throwback players that can play almost any position on the field. Not very often, do you see a running back that is also a punter, but that is what Joshua Fortenberry does for his football team. Due to his talents and versatility, Fortenberry was on the cover with some of the best North Louisiana players on the cover of our North Louisiana magazine. That may be a big honor for a lot of players from West Monroe, Neville, or Ruston, but for a program like Natchitoches Central to have a player like Fortenberry on their cover, it is even a bigger honor as he is one of the first players from the team to be on the cover of our magazine. Louisiana Football Magazine recruiting expert Lee Brecheen picked Fortenberry to be on the cover because he believes that the Natchitoches Central senior RB could be one of the biggest sleepers in the state this season.

“The Chiefs will be lead early on by their offensive firepower in stud sleeper RB Joshua Fortenberry,” Brecheen said. “Fortenberry has a chance to move up in recruiting fast because he is quick, fast with 4.55/40 speed, has size at 205 pounds, and has great moves in the open field.”

So far, nobody has really looked at Fortenberry as he has one college offer to play sports at the next level. For one thing, the school that has offered him, is only a community college and the other thing is that the school hasn’t even offered him to play football, but baseball. This player is a perfect definition of a diamond in the rough. Whoever will get Fortenberry in the end will end up being pretty happy because this is a guy who is great in the classroom with a 27 ACT score and a 4.2 GPA, but is also great on the football field because he is a great player to have around and has a great blend of size to go along with speed. There have been plenty of great players over the years in Louisiana that have been undervalued in recruiting and have gone to show what teams are missing out on. He may be the next one on that list of players. In today’s recruit spotlight, we caught up with Joshua Fortenberry as he talked about his high school career, being on the cover of the North Louisiana magazine, preparing for this week’s game, and so much more!

Let’s just say that I am overlooked lol! Colby Community College has offered me to play baseball!

I am not really into the stats, but last year, I got 1st Team All-District at running back and punter along with being a second team All-State Punter

My biggest strength is the offensive line that blocks for me. They do all the hard work for me so that I have room to run.

I need to improve on my route running out of the backfield along with catching the ball.

LAFM: Not a lot of guys play both running back and punter. I believe you also played on defense at some point as well. What is your favorite position to play and why?

My favorite position is running back. There is no greater feeling than getting yards for your team running up the middle!

Last season was very tough to know that we had the talent to be very good, but just couldn’t find a way to put the pieces together. This season, we need to all have the same goals and stay more team-oriented.

LAFM: Like mentioned in the last question, you now have a new head coach in Tommy Moore. What are your thoughts on Coach Moore and what has been his approach since he has taken over?

Coach Moore was with us last year, and I have nothing but love and respect for him! He has changed the way we do everything so that is like a family in every way! I can’t wait to see the growth of the program continue the rest of the season and after I’m gone! He is doing great things!

LAFM: The team plays in a very tough district against great teams like Ouachita, West Monroe, Ruston, Alexandria, and even Pineville. Do you believe that this is the best district in the state and if so, why do you believe that?

This is easily the best district in the state because of the level of competition that it brings! All of the schools have produced many Division I athletes and most have a history of being powerhouse football programs.

LAFM: Last week, the team lost to a really good team in North DeSoto. What does the team need to do in order to overcome that loss, avoid an 0-2 start, and play really good this week against a team with a lot of talent in Green Oaks?

This week, we need to come out more aggressively and strike first on offense because the longer we control the ball the less time that they can! We have to put long scoring drives together and continuously move the chains.

It is an honor to be one of the first players from NCHS to be on the cover of the LA Football Magazine because of all the amazing athletes that have come before me that I looked up to! It is unreal to be recognized as one of the best in North LA again because of the talent that the state has produced. It really puts into perspective how my hard work has paid off.

LAFM: You are a very entertaining football player to watch. Is there a running back that you model your game after? If so, who is it and why that particular player?

Not a running back, but Tom Brady (Michigan/New England Patriots) has to be the guy that I model my game after. He has so much poise and competitiveness that I love! You never see him get down and hang his head. He is always fighting to be a winner!

I like to spend time with my family and friends or my girlfriend Caitlin! I’m very involved in my youth group at church and the FBLA at my school!

My goals, for this season, are to lead my team back to the playoffs (preferably a home game) and make a run deep into the post season.

LAFM:  What is your message to the Natchitoches Central team and fans this year?

To all of the Chiefs and Chiefs’ fans, thank you for all your love and support for it does not go without recognition. There is no one else that I’d rather spend all my time with than my teammates. I love each and every one of you, and I’m going to give you all I have to help us be a successful program once again!

I want to thank my parents for always believing in me. I want to thank my sister Ashley for being my first competitor and always pushing me to out do anyone especially her. I also want to thank Coach Helms and Coach Moore for believing in me and giving me the opportunities to be a leader of the football team. I’d also like to thank Coach Austin Alexander for taking me under his wing and being a sort of big brother to me. Also, to all the other coaches, past and present, that have molded me to the man I am today, thank you!

I believe that my competitiveness is what sets me apart from other running backs. I know that the other ten guys are busting their backs for me so I make sure to do the same!