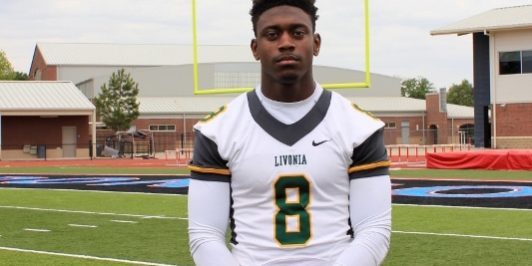 One of the best athletes in the whole state over the last couple of seasons was Livonia RB/LB Patrick Queen. Queen was one of those players that can be plugged in at any position and play at a high level at that position. Throughout his career playing for the Wildcats, he was the star player on both sides of the football playing the majority of the time as a running back but showed that he could get it done on the defensive side of the football as a linebacker. As a running back, Queen accounted for almost 4,000 yards rushing and 40 touchdowns and as a linebacker, he racked up almost 100 tackles, two interceptions, and a couple of pass deflections. He also gathered many awards and achievements throughout his four years as a starter for the Wildcats. Not only did he put great stats and numbers, but he helped the Wildcats achieve a perfect season and the 2014 3A state championship as a sophomore. Even though this past season did not result in another state championship for Queen and his teammates, he had another typical year for the Wildcats accounting for 1,700 yards and 19 touchdowns as well as making 66 tackles, 42 solo, seven tackles for loss, six pass break-ups, four sacks, three forced fumbles and two fumble recoveries. The talented two way star for the Wildcats will come down as one of the most heralded to play for Livonia, but will now take his talents 30 miles down the road to LSU. Although he will not play his primary position at running back, Queen’s skills and athleticism will help him become a key player in Dave Aranda’s defense for the next couple of years. In today’s recruit article, we caught up with the LSU signee as he talked about his high school career, winning a state championship, the position he enjoys playing the most, the reason why he chose the Tigers, and so much more!

LAFM: What are your stats and accomplishments while at Livonia?

I had close to 4,000 rushing yards and 40 touchdowns along with 25 receptions for 500 yards on offense. On defense, I had close to 90 tackles, two interceptions and five to six pass deflections. As far as awards go, I was 1st Team All-State on both sides of the football as well as All-State as a running back the year before. I also had 1st Team All-District MVP last year as well as 1st Team All-Metro for the last two years.

It’s a great school. A lot of people make it to the next level from there, and it is a home based team like you said. Everything about the culture is the reason why I chose the Tigers in the end.

LAFM: You played two positions majority of your time at Livonia which were running back and linebacker. You are going to play linebacker at LSU, but if it were up to you, what position would you pick to play at and why?

I would choose running back because it was basically what I played during my whole life so that was what I was used to.

My strengths are my football smarts and awareness because I can recognize the play and attack as well as my agility.

LAFM: What do you need to improve on when you get to LSU?

I need to get stronger as well as learn the defense.

LAFM: Last year, the team had a pretty good year going 7-5 and winning a playoff game, but it was not the type of season the team had two years ago when the Wildcats won the state championship. What are your thoughts on the season as a whole?

I knew we could have a good year, but not as good as we used to be because of our depth and size, but I still thought we could go out and win a state championship over the last two years.

I was playing slot receiver and H-back at the time and I was mostly used as a blocker so when the coach gave me the opportunity to run the football, I was excited, but as the season went on, I accepted that it was my job and I just rolled with it. As a result, wins came and I believe we won like 20 home games in a row. We wanted nobody to beat us at our home turf, and we made sure that we would also get the job done on the road.

No matter how hard it gets, you got to keep pushing. Keep fighting every play because you never know how might a game could change.

LAFM: You only played a limited amount of time at linebacker compared to playing running back. Who is the college or NFL linebacker that you model your game after to help your transition to playing linebacker full time?

I really like to watch Deion Jones (former Jesuit and LSU linebacker currently with the Atlanta Falcons). He is like me because he is quick and strong at the same time, which is a combination that is unstoppable.

I want to give a shout out to my cousin Nick Derogers, my best friend Christion Edwards, and my other best friend Kendrick Paul.

LAFM: Out of all the games that you played over your four year career at Livonia, what game sticks out and why?

My best game was probably when I broke my ankle in the second quarter of the playoff game against Crowley in my junior year. In the first quarter, I had 100 yards and two touchdowns until the injury prevented me returning to the game.

Basically, I just work out and try to stay in shape. I am a really cool and chill person that likes to ride four wheelers and playing ball at the park.

I would pick Church Point because that was our biggest rival. They would always hype us up and it was a positive thing for us because we would be able to feed off that.

I want to thank my whole family, the trainers that I worked with, my old middle school coaches, and my teachers.

I am going to miss having the spotlight on you, and our school was used to winning so every game was packed. They always knew that we were going to go out on top.

LAFM: Who was the best football player that you went up against over your high school football career and why?

I would say Devonta Smith (Amite senior WR and Alabama signee). He was the only receiver that scored on us consistently so I would have to give that to him.

LAFM: What are your plans when your football career is over?

I want to open some charities, and maybe pick up a coaching job. I don’t know yet so I got to see what comes down later on down the road.

LAFM: What was your pregame routine while at Livonia?

When I walk out on the field, I basically listen to a song called “In the Air Tonight” by Phil Collins.

LAFM: Why should LSU fans be excited to have you on their football team?