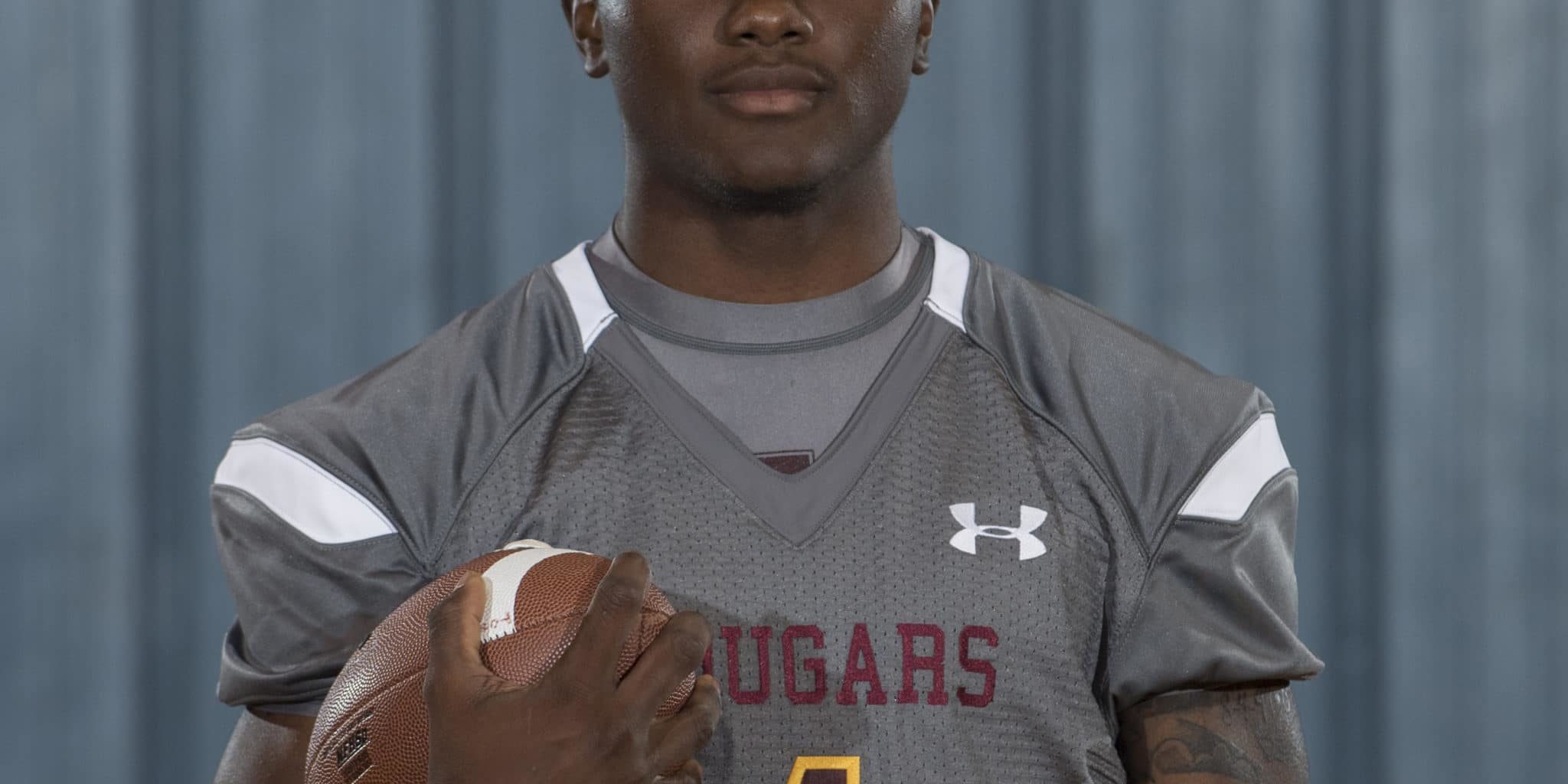 Just like Madison High School, the Grant Cougars do not have a lot of players for a team that plays in a bigger classification. As a result, the Cougars only had one victory of the season which was against the DeQuincy Tigers. However, the team was very competitive in their games just like the Madison Cougars were able to stay competitive in their games. Madison had a great player in Kevin Jones, who signed early with ULM, while the Grant Cougars had two really talented running backs that helped the team stay competitive throughout the season. Those two running backs are Rodara Ellis and Deante Lacour. Both of these runners did a great job of complementing one another when they were on the field. Lacour was the bigger running back at 6-0, 200, but at the same time had some good speed in the open field while Ellis may be a little smaller at 5-11, 170,  he is a special athlete that could make plays in open space as well as between the tackles just like his counterpart. Once Ellis gets in the open field, he is as dangerous as anyone. Not only is he fast, but he is also a tough runner between the tackles. Both of these runners have the ability to take over games. On multiple occassions, both running backs would run for over 200 yards and multiple touchdowns each. Both running backs are special, but today, we will profile the speedy and versatile Rodara Ellis. Not a lot of people that follow prep football around the state have not heard his name, but he has had a very good high school football career at Grant. Over his career, he has been All-District three times and has been named 1st Team All-District the last two seasons. In 2016, Ellis ran for 1,042 yards and 18 touchdowns. This year, Ellis had another 1,000 yard season, but it was his game against DeQuincy that really stood out this season as he helped get the upset victory rushing for an incredible 330 yards and six touchdowns. Louisiana Football Magazine’s recruit expert Lee Brecheen really believes that Ellis is one of the biggest sleepers in North Louisiana.

“Rodara Ellis is one of the best running backs in the Alexandria area,” Brecheen said. “He is a tough runner that also has 4.6/40 speed.”

Ellis is indeed a player that definitely deserves a lot more attention. So far, Ellis has one offer and that is from Southwestern College in Winfield, Kansas. Ellis is a team player that can play multiple positions including wide receiver and free safety. He is a guy that really helped carry his team over a course of a couple of seasons and at the same time, he has done good in the classroom as he has a 2.9 GPA. Ellis is a very confident football player that definitely could translate to the next level if given the opportunity to prove himself. In today’s recruit spotlight, we caught up with the three time All-District running back as he talked about his high school football career, his relationship with fellow star running back Deante Lacour, the player he models his game after, his future goals, and so much more!

LAFM:  What are your accomplishments while at Grant?

LAFM: Have you received any offers to play for any schools?

I have an offer from Southwestern College in Winfield, Kansas.

My biggest strength is getting in the open field and making things happen.

I need to get bigger and smarter.

I model my game after Le’Veon Bell (Michigan State/Pittsburgh Steelers) because he is very patient in regards to letting the hole open up.

The game that sticks out to me the most is the DeQuincy game.

LAFM: You and your teammate Deante Lacour were a great one two punch at running back. What helped make you two special together and how do y’all complement one another?

We just work together and compliment each other in everything we do regardless if it is in the weight room or on the field.

LAFM: It was a struggle this season as the team only won one game but what were some positive things that you took from this season even though the team struggled to find a way to win games?

I learned to never give up and don’t stop playing until the last minute.

LAFM: Where do you see yourself in the next couple of years?

Hopefully, I get drafted to the NFL and take care of my family.

LAFM: What are you like off the football field when you are not playing football?

I like to have fun and just play the game of football.

LAFM: What is your message to next year’s Grant team?

Keep it up, move forward, and work hard!

I would like to thank God, my family, and my coaching staff.

I want to give a shout out to Deante Lacour, Malik Jenkins, and Kendrick Jenkins.

LAFM: What is your intended major when you go to college?

LAFM: As a running back, what is your favorite running play?

I like any running play that goes up the middle.

I am going to miss the environment and playing around the coaching staff.