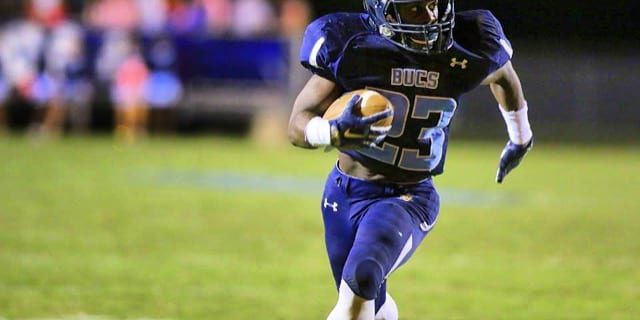 One of the best and most electrifying skill players in the entire state is Barbe senior do-everything RB Kirkland Banks. Banks is one of the best play makers when he has the football in his hands. He is one of those guys that is a nightmare for defensive coordinators because he has the ability to run between the tackles, run on the outside, catch out of the backfield, and be a kickoff returner as well as a punt returner. He can also line up at wide receiver and play at that position as well. To add to the list of skills that Banks has, he is also a very good baseball player that has won three state championships on the Barbe baseball team. Kirkland Banks is a human highlight reel, and people keep their eyes out for #23 to see what he does next. Banks and Barbe senior WR/McNeese signee Nate Briscoe were two big time offensive stars that helped the Buccaneers achieve a 10 win season as well as a playoff win this season. Even though the Buccaneers did not achieve their goal of winning a state championship, they were still in the conversation as one of the best teams in the state, and the 5’8, 170 running back from Barbe was a huge part in doing that. Before the season started, Louisiana Football Magazine Editor/Scout/T.V. host Lee Brecheen had some high remarks about the star running back when he was named on our 1st All-Louisiana team.

“Kirkland Banks is the best athlete in the Lake Charles area,” Brecheen said. “He reminds me of KaVontae Turpin (former Neville and current TCU wide receiver) because of his ability to play running back, wide receiver, and kick returner.”

Those high expectations paid off for Kirkland Banks as he had another great season. This season, he was an honorable mention for our 5A Offensive Player of the Year award. Last season, he had over 1,500 yards of offense and 27 total touchdowns. This is his third consecutive year of having 1,000 yards rushing in a season. Even with all of the accomplishments on the football field and all of his abilities, Banks did not get a lot of big time offers, but he has received some offers from some smaller schools. In the end, Kirkland Banks has decided to take his talents to Lamar University as not only a football player but as a baseball player as well. Cardinals fans should be very happy with the pickup as they got themselves a very dynamic and exciting football player that can be a star in their offense for years to come. In today’s recruit spotlight, we caught up with the Lamar football signee as he talked about his high school football career, his baseball career, signing with Lamar, and so much more!

LAFM: What is your 40 yard time, max bench press, vertical, and max squat?

LAFM: What are your stats and accomplishments while at Barbe?

LAFM: You have signed to play football at Lamar. What is it about the Cardinals that has made you want to join their football program?

Well, when I took my visit there, they treated me very well, and I felt like the things they told me were not just trying to sell me to come there. It also wasn’t too far away from home!

My strengths, as a running back, are making people miss and getting that extra yard when we need it as well as making stuff happen out of nothing.

LAFM: What are some things that you need to improve on when you get to the next level?

I need to get my strength, my weight up, get faster, and to mature mentally and physically.

LAFM: You can make a lot of plays in a variety of ways. What is your attitude when you have the ball in your hands?

My attitude is to get in the end zone every time I get the ball in my hands!

LAFM: You were not the only offensive weapon on the team as WR Nate Briscoe was a big time weapon as well. What is it like playing with another play maker like Nate?

It’s great to have another play maker on the field with you because you know that you can count on him to make a big play at any time!

LAFM: Let’s talk about your season. The team had a really good season going 10-2 and making the 2nd round of the playoffs. What are your thoughts on your senior season as a whole?

I think we prove a lot of people wrong! I know we didn’t make it to the Dome, but we fought through adversity and came out with a winning record!

I model my game after Marshawn Lynch (former Cal, Buffalo Bill, and Seattle Seahawks running back). I like the way he played the game and how he can run over you, but at the same time, he can make you miss.

LAFM: You were named to our 1st All-Louisiana team at the beginning of the season. What does it mean for you to be recognized as one of the best players in the state?

It means a lot! I thank God everyday for that, but I also had to get better each and every day!

My best game, at Barbe, was in my junior year against Sam Houston. In that game, everything was working for me. My juke move was working and the linemen up front were creating holes on both sides. I finished with 320 rushing yards.

LAFM: What does it mean for you to play at a program like Barbe?

It’s a blessing to be apart of a program this good because Barbe is known for winning, and they are going to push you in order for you to become the player that you want to become.

It’s amazing! Running with the trophy above your head and hearing the crowd yell is unreal!

LAFM: You are a great two sport athlete. Are you playing baseball as well at the next level?

I will be playing both football and baseball when I get to Lamar!

LAFM: What was your pregame routine when you were at Barbe?

The night before, I watch clips of the best running backs in college as well as in the NFL, and I pray after that! On the day of the game, I go eat a footlong from Roly Poly. Then, I get to the field house, play my music before we go out, and finally, I eat a bag of Skittles!

My uncle Tim Sensley played for the University of Louisiana Lafayette.

First off, I want to thank God for blessing me with the talents that I have as well as my parents for pushing me everyday to be better and to never be satisfied!

LAFM: What separates you from all the other running backs in the state?

I can line up in the backfield for one play and the next play, I can be at receiver! I can also run you over too!