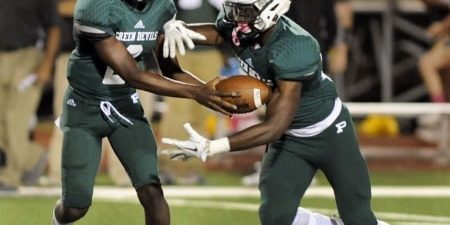 In Class 4A, programs such as Neville High School and Edna Karr High School have dominated the class over the last couple of years, but there are other strong programs in the classification such as Plaquemine High School. The Green Devils, led by Paul Distefano, have been winning district championships and have gone pretty far in the playoffs on a consistent level. This season, the running game and the athletic defense helped led the Green Devils to the district championship as well as a quarterfinal appearance where they lost a heartbreaker to McDonogh 35. Some of the key players ,on this year’s team, were some highly known players such as senior FS Todd Harris, who has now signed with LSU, but the running game was the key for the Green Devils this season. The running back, that was the workhorse for the team, was senior RB Kevin Dominique. Dominique was the thunder to junior ATH Wayne Toussant’s lighting. Each have their own abilities. Toussant was the X-Factor in the return game, the receiving game, and outside running plays. At 6’1, 210, Dominique was the every down running back that would run in between the tackles. The combination has really paid off especially for Kevin Dominique. Last season, he had 1,805 rushing yards and 26 touchdowns. It was an incredible year for the senior running back, who got his first significant playing time after transferring from Parkview Baptist in his sophomore year. What is even more incredible was that Dominique sat out in a lot of games in the second half because of blow outs. The LSWA 1st Team All-State running back’s success attracted some D-I programs and in the end, he decided to take his talents to Ball State University. In today’s recruit spotlight, we caught up with the Ball State signee as he talked about his high school career, playing with Wayne Toussant, his senior season, the reason why he chose the Cardinals, and so much more!

I am Kevin Dominique. I am 17, and I played running back for Plaquemine High School.

LAFM: What are your stats and accomplishments while at Plaquemine High School?

My strengths are being a down hill, physical runner with a lot of speed.

Some things that I need to work on is my blocking as well as my technique.

LAFM: You have signed with Ball State to continue your football career. What is it about the Cardinals that has attracted you to play football there?

Ball State attracted me because of their digital media program and early playing time.

LAFM: In your senior season, the Green Devils had a great season winning the district championship as well as making to the quarterfinals. What are your thoughts on the season as a whole?

We had a really great season. I am really proud of all the young guys that stepped up and played big roles.

LAFM: You and Wayne Toussant were big time playmakers for the Green Devils. What do you have to say about your electrifying teammate as a football player?

In my opinion, Wayne is a playmaker and should have more offers. He is honestly one of the best wide receivers in the state right now.

LAFM: Since the season is now over, what do you do in the offseason to get you ready for the next level?

Since the season is over, I have been constantly working on my craft as a player.

LAFM: What was your best football game while at Plaquemine?

My best football game was against Port Allen. I had 264 rushing yards and three touchdowns.

LAFM: What is your favorite running play as a running back?

My favorite running play is power.

LAFM: What is your message for next year’s Plaquemine team?

My message, for the team, is just to persevere throughout the whole season.

LAFM: What are some other hobbies that you like to do when the football season is over?

When the football season is over, I really just try to workout and gain weight.

My pregame routine is just listening to music and sleeping.

LAFM: Who are some people in your life that you like to thank for putting you in the position that you are in today?

I really want to thank my parents and teammates for helping me to be in the position that I am in today.

LAFM: What makes you unique from any other running back in the state?

What makes me unique from every other running back is my versatility and being healthy 24/7.