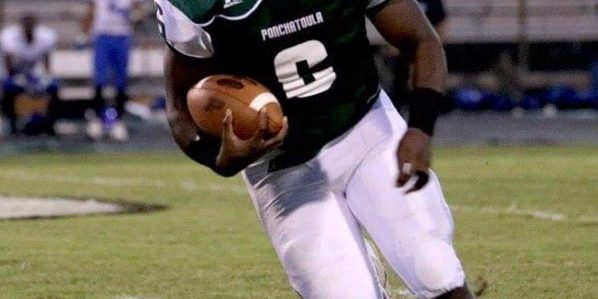 One of the best players to come out of Ponchatoula High School is senior ATH Jakyle Holmes. The Green Wave knew that they had a special player when he started playing as a freshman. Not only is Jakyle Holmes super talented, but he is a versatile player that can play all over the football field. During his career, he had played QB and WR, but he was being recruited as a running back.  Holmes is a dynamic football player that is a threat to score on any play with his electrifying speed. In his senior season, he was the star offensive player that led the Green Wave to a ten win season and a second round playoff appearance in which they would eventually lose to another 5A powerhouse in Acadiana. In his senior season as the option quarterback, Holmes showed signs as a threat not only on the ground, but through the air as well with over 1,300 rushing yards, 875 passing yards, and 23 touchdowns. At the beginning of the season, Holmes made our 2nd All-Louisiana team as a running back which comes to show you how talented he is even though technically he has not played running back at Ponchatoula. Louisiana Football Magazine Editor/T.V Host/Scout Lee Brecheen knew how much talent that this senior athlete had ever since he bursts on the scene.

“Jakyle Holmes has always been very talented,” Brecheen said. “He started playing varsity as a 9th grader!  I believe he can be just as good as Jacob Kibodi from Christian Life or Travis Etienne from Jennings. Holmes is similar to Etienne because he can run a legit 4.4/40 on turf.”

That is a lot of high praise for Holmes, but he also has shown how much potential he has as a football player. Jakyle Holmes decommitted from Minnesota and then eventually signed with the Warhawks of Louisiana Monroe in the end. It was a huge pickup for ULM as the team got their highest ranked in-state signee since 2008 when the Warhawks signed another talented RB in Luther Ambrose out of St. James High School. The Warhawks sure have themselves an offensive weapon that can make the team dangerous in the near future. We caught up with the ULM signee as he talked about his high school career, the reason why he picked the Warhawks, his favorite football memory at Ponchatoula, and so much more in today’s recruit spotlight!

LAFM: What is your name, position, and school you played for?

In my senior year, I rushed for over 1,300 yards on 202 carries and threw for  875 yards to go along with 23 touchdowns. I was District MVP, All-Metro, and Honorable Mention All-State.

LAFM: You have signed with Louisiana Monroe to play football. What is it about the Warhawks that helped make your decision to play for them?

I went on my official visit, and I felt at home. It’s a family place and it is a football community. I also feel that they are rebuilding the football program and want to be a part of it.

LAFM: What are some other sports that you played while at Ponchatoula?

My biggest strengths are making people miss, my speed, my route running, and as well as my ability to break tackles.

LAFM: What are some things that you need to improve on when you get to Louisiana Monroe?

I need to improve on my patience and letting plays develop.

LAFM: Who is the college or NFL running back that you modeled your game after and why?

I like to watch Ezekiel Elliott (former Ohio State RB currently with the Dallas Cowboys) run because of his strength, speed, and being able to catch passes out of the backfield.

LAFM: The Green Wave had high expectations this season. The team won 10 games and made a pretty good playoff run. What were your thoughts on the season as a whole?

Heading into last season, everybody was looking down at us because we lost a lot of players the previous years before and a lot of them thought that we were going to have a down year, but it turns out that this season went really good. I felt that everybody was close and that everybody had a relationship with each other.

I want to give a shout out to Juan Gross, Jalen Pines, Joquan Johnson, and Chris Wells.

I love fishing and working out with my friends.

LAFM: If you had to play against any team in the state for one final game, who would it be against and why?

I would choose Acadiana because that was the team that beat us in the second round. I had a hurt knee in that game, and I felt like that I could have done a better job. If we played them again, I think we can pull off a win.

LAFM: What was your favorite football memory while at Ponchatoula?

I went to play defensive back for just one play in a game. It was the only play that I played for Ponchatoula on defense, and I picked a pass off one-handed.

Ponchatoula senior ATH Jakyle Holmes catches a couple of passes during warmups at wide receiver where he played in his sophomore and junior years. (Photo courtesy of Mrs. Hunt)

LAFM: What was your favorite game while at Ponchatoula?

My best game was at Loranger last year because I carried the ball 16 times for 295 yards and four touchdowns.

LAFM: Before the season started, you were named to our All-Louisiana team. What does it mean for you to be recognized as one of the best players in a state that is filled with a lot of talent?

It means a lot because Louisiana is a great place. It’s really good to be recognized in anything especially being one of the best players in Louisiana.

I am going to miss playing under the Friday night lights as well as listening to the student section and the band play.

LAFM: What is your advice for next year’s Ponchatoula team?

Keep the tradition going and try taking it farther than we did last year.

LAFM: Why should Louisiana Monroe fans be excited for having you on their football team next fall?

I am going to bring some good help to the team next fall.