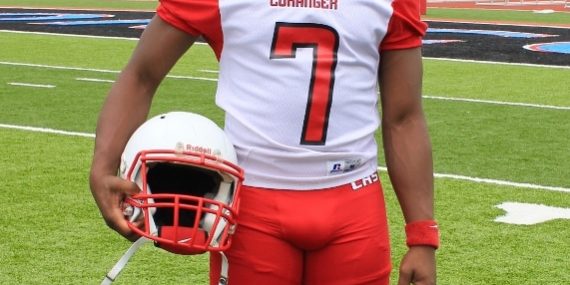 Loranger senior running back Evan Johnson is one of the most exciting running backs not only in the Tangipahoa-St. Tammany area, but in the entire state. Even though Johnson is only listed at 5’7, 175, he runs the football like he is 6’3, 230. He is a powerful runner that uses his height and size to his advantage where he can hide behind his linemen and make it impossible for defenders to track him down. Evan Johnson is a gifted athlete that has been All-State not only as a running back but as a defensive back as well. Johnson may not be the biggest guy, but he has been one of the best players in Loranger football history with what he was able to accomplish during his four years. He has been named All-State an incredible three times as well as being named a Warrick Dunn award finalist this season. He was even one of our Offensive Player of the Year Candidates in 4A at the end of the season. Johnson is a versatile playmaker with the ball in his hands as he can make plays running inside the tackles, running on the outside, receiving, and as a kick returner. When he is on defense, he is great attacking the football and being a ball hawk. There were plenty of games that the talented Loranger athlete put up 200 and 300 all-purpose yard performances including this past season. Last season, Johnson had 2,672 all-purpose yards last season and 23 total touchdowns, but what was more important than his stats was his ability to energize the team with his big plays. Those big plays helped the Wolves achieve one of their best seasons in the last five years winning nine games and a playoff game against St. Martinville. The football journey at Loranger ended for Evan Johnson when the Wolves lost to Carencro the very next game, but another football journey will begin for Johnson at North Texas where he will continue his football career. The Mean Green will get themselves a big time playmaker and sometimes the biggest presents come in small packages. In today’s recruit spotlight, we caught up with the North Texas signee to talk about his high school career, the motivation to his game, the player he models his game after, the reason why he chose North Texas, and so much more!

Loranger senior RB and North Texas signee Evan Johnson takes this run to the outside where he is really dangerous. (Photo courtesy of Boindee Photography and Design)

LAFM: What are your stats and accomplishments while at Loranger?

In my senior year, I had over 1,600 rushing yards and over 2,000 all-purpose yards. I was All-State from my sophomore year all the way to my senior year. I had the Sportsline Player of the Week award as well as a Warrick Dunn award finalist. I didn’t win but it was a huge honor just to be a nominee.

LAFM: You have signed with North Texas to continue your football career. What is it about the Mean Green that has attracted you to play football there?

It felt like family once I went over there on my official visit. It seemed like home and they have been on me since day one. They offered me, and they never let up. It was just the atmosphere and the way that they treated me like family really attracted me to go over there.

A lot of people might not believe it, but I want to say my height. It’s kind of hard to tackle me because I am not the biggest figure and sometimes you might not see me behind some linemen. I am also a student of the game, and I pay attention to the small details as well.

LAFM: What are some areas to your game that you need to improve on when you get to North Texas?

First of all, I need to improve on my blocking since I am a smaller running back so I need to work on getting stronger and faster because the game is going to be a lot faster at the next level.

LAFM: Who is the college or NFL running back that you model your game after and why?

One running back that I really watch is Darren Sproles (former Kansas State, San Diego Charger, and New Orleans Saints RB currently with the Philadelphia Eagles) because he is similar height wise as I am. To say that he is that small, but at the same time, he has been in the league for such a long time shows you that he is doing something right for his size. I really watch him, but I watch a lot of receivers as well. I watch tape on Tavon Austin (former West Virginia WR currently with the Los Angeles Rams) because he is the real deal.

Loranger senior RB and North Texas signee Evan Johnson did almost everything for the Wolves last season accounting for 2,600 all-purpose yards and 23 touchdowns. (Photo courtesy of Boindee Photography and Design)

LAFM: You had plenty of great games in which you accounted for over 200 and 300 yards in a single game. Out of all the great games that you had, which one sticks out to you the most and why?

I would have to say the game against Lakeshore this year because it came down to the wire. It was 36-35 and they were going for two once they scored. They took the lead with 14 seconds left and we ended up winning the game on a long pass to myself. I also had over 300 all-purpose yards that game. It was one of the best games of my career.

LAFM: Last season, the Wolves went 9-3 and won a playoff game against St. Martinville. What are your thoughts on last season as a whole?

Last year was one of the best seasons that I had at Loranger hands down. We accomplished a lot. We beat a team that we never beat before in history and it was the first time winning district in 4A. We ended up losing in the second round, but the season as a whole, was great, and I took a lot not only from the field but off the field as well. It was a big learning curve for us just being in our second year in 4A, but it was a good season as a whole.

I want to give a shout out to Deandre Brown, Jabari Coston, DJ Hookfin, Malcolm Perry, Alex Williams, Will Wilson, and plenty of more guys. I can go on for days.

LAFM: What is your advice for next year’s Loranger team?

LAFM: What do you like to do when you are not playing football?

I like to be with my family and workout. I am really low key and just like to chill.

LAFM: What are you going to miss most about playing football at Loranger?

Loranger senior RB and North Texas signee Evan Johnson was a threat as a runner, a receiver, a returner, or even a defensive back where he was also an All-State selection (Photo courtesy of Boindee Photography and Design)

LAFM: If you had to go back and play one more game, who would it be against and why?

I want to go back to the last game of my senior year because I feel like I could have done better. It wasn’t my best game, but it wasn’t my worst. We could’ve won that game and have been in the third round, but that’s a game that I would want to replay.

When my football career end, I want to try and be an athletic trainer. To be on the sidelines of a football or a basketball game and to tape people up is something that I really want to do.

It means a lot and it goes back to the hard work that I put in. I dedicate it to my parents and coaches because they put me in the position that I am in. They deserve credit too because without them, I wouldn’t have done it.

A lot of people doubt me because of my size so it just fuels me to go even harder every time that I run the football. I feel that I have something to prove and that I have a chip on my shoulder.

LAFM: Why should Mean Green fans be excited to have you on their football team?

They are going to get themselves an exciting player that is going to love their community. I am a people person so I am not only a really good football player, but a good person as well. That’s why they should get excited!