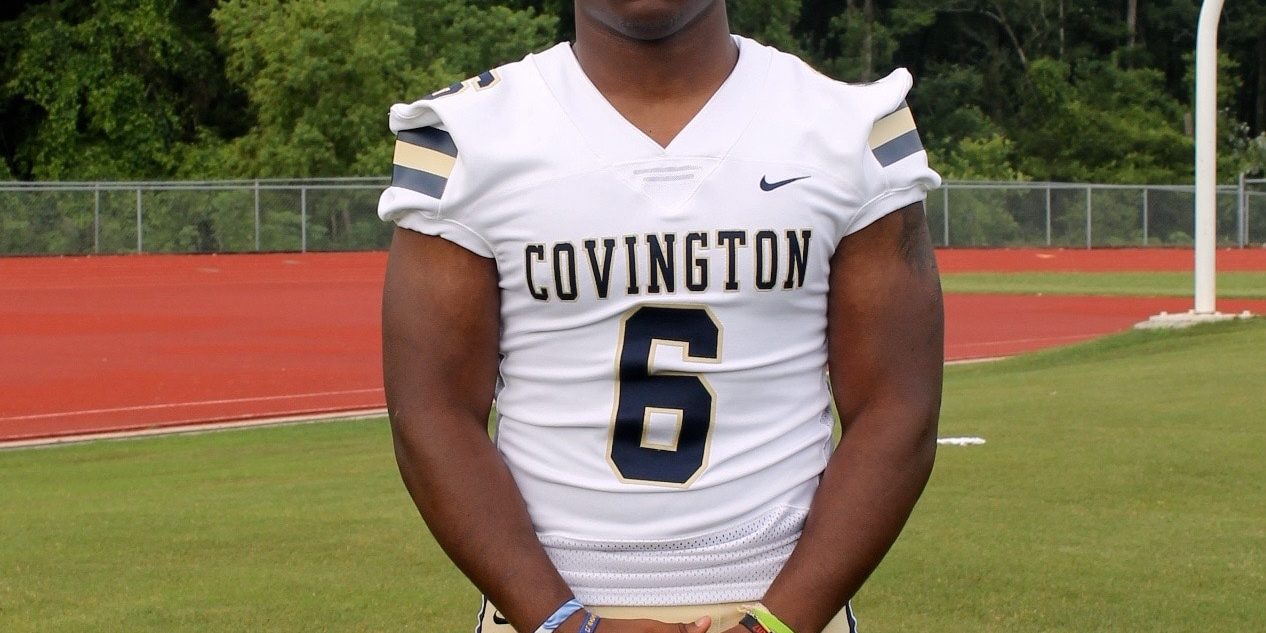 Covington RB Devin Brumfield has already rushed for an incredible 4,200 yards as well as 50 touchdowns, and he has yet to start his senior season. Over the last couple of years, Brumfield has quietly been one of the best running backs in the state regardless of class. Starting at any position is an incredible feat especially at a premier position like running back and for a 5A powerhouse football program like Covington. The Lions’ all-time leading rusher has been the main offensive weapon for his team the past four seasons and even when he started as a freshman, he played like a fifth year senior. His maturity as a freshman was incredible and immediately became a breakout star. Not only was he mature mentally but physically as well. Brumfield may not outrun everybody as he does not necessarily have 4.4/40 speed, but he is a running back that has great vision and power for a guy that is 5-10, 215 pounds. Brumfield has already received offers from Missouri, Lamar, Utah, Nicholls State, West Virginia, Texas Tech, Texas San Antonio, Colorado State, McNeese State, UL-Lafayette, Southeastern Louisiana, Louisiana Tech, Troy, Memphis, Mississippi State and Arkansas State. Even with all of the offers that the All-South LA 1st team running back has received, he is still underrated as he is listed as only a three star running back. Louisiana Football Magazine Editor and Scout Lee Brecheen is very familiar with Brumfield as he has watched him play ever since his freshman year and has been very impressed with him ever since the beginning just to say the least.

“Devin Brumfield was the best freshman high school running back that I have seen since Leonard Fournette (LSU/Jacksonville Jaguars) when he was at St. Augustine,” Brecheen said. “He is mentally and physically mature like he is 23 years old. He does not hand time a 4.40/40 but he has a lot of power to go along with vision. If he signed with Alabama, he would be successful and is a player that will have success wherever he goes.”

Brecheen has a lot of praise for Devin Brumfield and why not as he is the school’s all-time leading rusher, an All-State player, a four year starter, member of our All-South LA team, and is on the cover of our South edition of our magazine. It is safe to say that Devin Brumfield might be the greatest player to come out of Covington and a career year as well as a state championship should cement him as the greatest player to put on the navy and gold. Last week, Brumfield announced that he has committed to play for the Texas Tech Red Raiders. In today’s recruit spotlight, we caught up with the Texas Tech commit as he talked about his legendary Covington career, this season, the reason he chose the Red Raiders, and so much more! 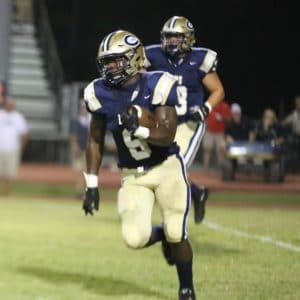 For the past four years, Covington RB Devin Brumfield has been an opposing defense’s worst nightmares and will look to continue to terrorize tacklers with his punishing running style for one more season. (Photo provided by Devin Brumfield)

LAFM: About a week ago, you made the announcement that you were going to commit to Texas Tech. What made you decide to choose the Red Raiders and why did you make that decision before the start of the season?

I wanted to commit before the season to focus on this year. I chose Texas Tech because I have a great relationship with Coach Juluke, and that family environment I know that I will fit great with.

I feel that is a very good accomplishment and I am very honored.

I have to say breaking the school rushing record is my biggest accomplishment of my career so far.

LAFM: You are the all-time leading rusher in program history. What are your thoughts on breaking all these records at a program that has been very successful at football?

It means a lot simply because I know that there were tons of great running backs before me and being able to break that record with a year left to go is amazing.

I am a hard runner that never quits on plays.

I feel that I need to improve on my patience as a runner.

LAFM: LAFM Editor and Scout Lee Brecheen said that you were the best high school freshman running back that he has seen since Leonard Fournette when he was playing as a freshman at St. Augustine. What are your thoughts on that and what have you improve the most as a running back since your freshman season all the way up to your senior season?

I believe that is great. Who doesn’t want to see that name next to there’s in an article, but I believe that I have improved as more of a guy that can help wherever is needed.

LAFM: Last season, the Lions finished the season with a 5-6 record, but this season, the offense returns nine starters. How confident does the offense look this year with everybody coming back?

I believe we give a chance to be great knowing what we have with our experience. We should be hard to stop.

LAFM: The team plays in a very tough district and over the last decade, it has been St. Paul’s that has been dominating the district. What does the team need to do to finally get past them and make a run at not only the district title but the state title?

I believe we all have the tools needed and have what it takes to compete with anyone so once we put the pieces all in place, we should be great.

LAFM: What team are you most excited to play against besides St. Paul’s and why?

I’m excited to play them all. Out goal is to be better than last year, and we will take it week by week and hopefully, this is a season to remember.

Statistically, I would say the Slidell game back in my sophomore year.

LAFM: Who is the running back that you model your game after and why?

I have always loved Adrian Peterson (Oklahoma/Minnesota Vikings/New Orleans Saints) simply because he will punish you, and that is what I feel I am best at.

I like to play video games, basketball, and fish.

My goal is to be better that I was last season.

LAFM: LAFM: What is your message to the Covington team and fans this year?

All I have to say is Go Lions!

I want to simply thank my friends and family.

My fight makes me stand out from all the other running backs this season.