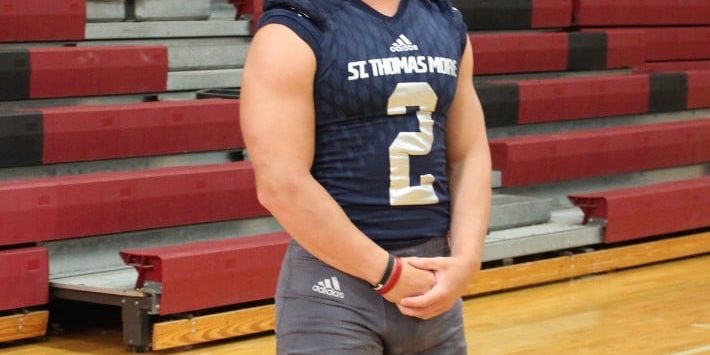 The St. Thomas More Cougars had a successful regular season finishing 9-1 heading into the playoffs. The Cougars soon lost to state runner-up De La Salle in the semi-finals 28-14.

Senior running back Chris Primeaux led the charge of one of the most explosive backfields in the state, which features fellow backs Sydney Lindon and William Cryer.

The 5-7, 182 pound running back tore up the field for the Cougars throughout the entire season leading all backs with 1,211 total yards on the ground and 15 touchdowns. With this season, Primeaux has emerged as one of the most prominent running backs in the state.

As a running back, who has not participated in one collegiate rep, Primeaux has blossomed into a player who plays beyond his years. His football IQ is extremely high after being around the game for as long as he has.

Throughout his time at St. Thomas More, Primeaux emerged as one of the primary leaders of this team with the his consistent production on the field. His teammates gravitated towards him and looked up to him as a role model based on his actions on and off of the field.

“I am more of a leader by example,” Primeaux said. “I wouldn’t say I am shy. I just feel like I would come off as rude sometimes if I vocalized my leadership.”

In his junior year, Primeaux set the example for his teammates with his consistent superb play on the field. In 2016, Primeaux averaged over and 100 yards per game and helped lead St. Thomas More to a state championship over Parkview Baptist High School 54-29. Primeaux described this game as his most memorable high school contest.

“What made it memorable is just all of the hard work we put in as a team the whole year to make it back to the Dome and then finally getting there and winning was an amazing feeling I’ll never forget,” Primeaux said.

At that point, the Cougars and the Eagles have grown to become very familiar with each other. The two programs met in the state championship twice and in the playoffs during Primeaux’s senior year.

Moving on to the collegiate level, Primeaux will have to get acclimated to the elevation of competition opposed what he faced in high school. Primeaux says he is up to the challenge and knows what he needs to anticipate going forward.

“The biggest adjustment will be not playing for a while because I’ve played since my sophomore year,” Primeaux said. “ I’m just used to being on the field a lot and helping my team.”

With college comes a new experiences on and off the field for players to look forward to. Having a fresh start on a new stage will give Primeaux the opportunity to prove what he has to offer. With coming from a winning culture at St. Thomas More, Primeaux has the intangibles it take to winning and contributing to a winning program.

“Some of my personal goals for college is to have fun and make the most of my football career,” Primeaux said. “I love the game and I know that I can take a lot of life lessons from it.”

As of right now, Chris Primeaux has received no offers, but is looking for any opportunity to show off his talents at the next level.