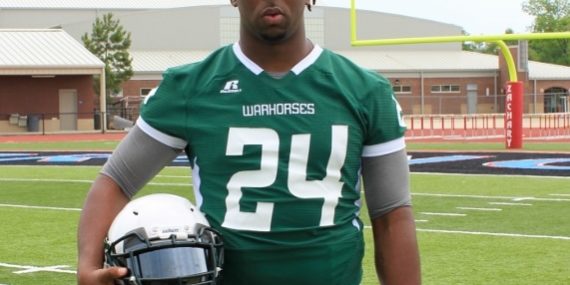 It seems that the era of the every down power running back is coming back to football as there have been every down running backs being selected in the first couple of picks in the NFL Draft. One guy that is a definition of a power running back is Peabody senior RB Bruce Price. Price was the main focus of the Peabody rushing attack. The Warhorses of Peabody have been really underrated in terms of producing really good running backs. In the 2012 class, the team had a running back in Jalen Richard, who happened to have a breakout season and is now with the Oakland Raiders. Now, the Warhorses have a chance to produce another talented running back who may have that same type of success. Unlike Richard who was 5’8 and around 200 pounds, Price is a tank at 5’11, 230. Even though Price is one of the biggest running backs in the state this season, he also has the ability to outrun defenders with his 4.6/40 speed. The Warhorses played an old school brand of football, which was give it to the big bruising running back and let the offensive line do the dirty work. That strategy paid off not only for the senior Warhorse running back, but for the team as well. Last season, Price touched the ball 240 times for 1,632 yards and 29 touchdowns. That helped lead the team to a solid 8-4 season as well as a playoff win against St. James. His achievements were recognized as he made our Offensive Player of the Year Honorable Mentions in the entire state. Bruce Price will try and duplicate that same type of success at Grambling State University, which is going back to the old days when they were winning the SWAC conference at a regular basis. Bruce Price will be known as one of the key players that has helped Peabody become one of the rising programs in the state and will continue to help the Tigers of Grambling State become a dominant program once again. In today’s recruit spotlight, the Grambling State signee talked about his high school career, playing football at Peabody, why he chose Grambling in the end, the player he models his game after, and so much more in today’s recruit spotlight!

Peabody senior RB Bruce Price was definitely a Warhorse for the team last year with his 240 carries. (Photo courtesy of the Town Talk)

LAFM: What is your max bench press, max squat, and 40 time?

LAFM: What are your stats and accomplishments while at Peabody?

My biggest strength, as a running back, is getting a defender out of my way and running the ball.

I want to work on my speed as well as my blocking, but everything else is good.

LAFM: You have signed with Grambling State University to play football at the next level. What is it about the Tigers that has drawn your attention to play there?

When I went there for my first visit, I fell in love with the place. Everybody there makes you feel like family and I thought that this was the place that I wanted to be. It’s a good place for me, and I felt at home.

LAFM: Let’s talk about the season. The Warhorses had a really good year going 8-4 and even included a playoff win against 3A powerhouse St. James. What are your overall thoughts on the season?

To be honest, we played down to the level of our competition last year and we shouldn’t had done that. We should have been a state championship team because we did beat St. James, who went to the state championship the year before. They had us down 27-7 and we came back. We just played down the level of competition and is going to be something that the team will fix moving forward.

LAFM: You mentioned the St. James game this year. Was that your favorite football memory at Peabody?

My favorite game, while at Peabody, had to be the St. James game.

LAFM: Who is the college or NFL running back that you model your game after and why?

Leonard Fournette (former St. Augustine and LSU RB who got drafted by the Jacksonville Jaguars) is the running back that I model my game after. He is a bus with a carbonate engine.

LAFM: You had a really good season, but at the same time, you did not get recognized like a lot of other great running backs in the state. Why do you think that you were overlooked this season?

I don’t think that I am underrated, but I think that the kind of school that I came from. This year at Peabody is one of the first years that we had a winning season. I have been there for four years so it takes time to build a great program. It really wasn’t about me being underrated, but it was just that nobody heard about Peabody until this year. Coming into my junior year, I was working and a lot of coaches came by the school. They would say that I had never seen this kid and let’s go check him out. Then, I got a lot of coaches looking at me. It was just the school basically and that we are still really building the program.

LAFM: Like you said, you have been part of a rising football program like Peabody for four years. What is your advice for next year’s team in order to keep this type of success moving forward?

My advice, to next year’s team, is to not let up on anyone. Don’t play to the level of the competition and always work hard.

LAFM: What is your favorite play?

I would say either 24 power or 26 trap because both those plays allowed us to go in there an play smash mouth football, but it is also a stretch play and if you see a hole, you put your foot on the ground and go.

LAFM: As a running back, you couldn’t had all that type of success by yourself. You had to have some help with the offensive line. Who are some of your offensive lineman buddies that you want to give a shout out to?

I am giving a shout out to Chad Williams, Sir’warren Johnson, Chris Nash, Wayne Compton, and Rocky Countee. They put in work and that is where the credit should go to. If I didn’t have those guys, I wouldn’t have rushed for 1,600 yards and 29 touchdowns. I have to give credit to all of my offensive line and most of those guys played on both ways. They still got the job done.

LAFM: What are you going to miss most about playing high school football at Peabody?

Peabody senior RB Bruce Price is a load for defensive backs and linebackers to bring down at 5’11, 230 pounds. (Photo courtesy of the Town Talk)

It really means a lot, and it really helps to get our school recognized.

LAFM: What does it mean for you to play and attend your high school career at Peabody?

It was really big. I didn’t start my freshman year until the last game of the season, and it went up from there. I don’t care what every other high school around the state or in the city of Alexandria says but in sports and academics, we win in both ways. It is really big and I advise the junior high students to choose Peabody. Also, everybody that played football in our senior class had at least an 18 on their ACT.

I am going to school to get my degree in business. I want to open up a welding shop with a lot of my family and friends. I think it will bring good money to my home, and I also want to start a youth program to speak out to the younger kids. That is another thing that I want to do.

LAFM: Who are some people that you want to thank for helping you be in the position that you are in today?

I want to thank my junior high head coach Bobby Wilcox. I thought I was Michael Jordan (NBA Hall of Famer) and he helped me settle down and realized what my talents are. I also want to thank Coach Vault because of what he has been through with us and with his wife having cancer, I really want to thank him. Lastly, I want to thank my only RB Coach Connors, who went back to Ferriday, for working with me a lot.

LAFM: What is your message to Grambling State fans?

My message is Don’t Worry! Once Martez Carter (former Richwood RB currently with Grambling State) leaves, they can call somebody else Mr. Excitement, but they can call me BEAST MODE!