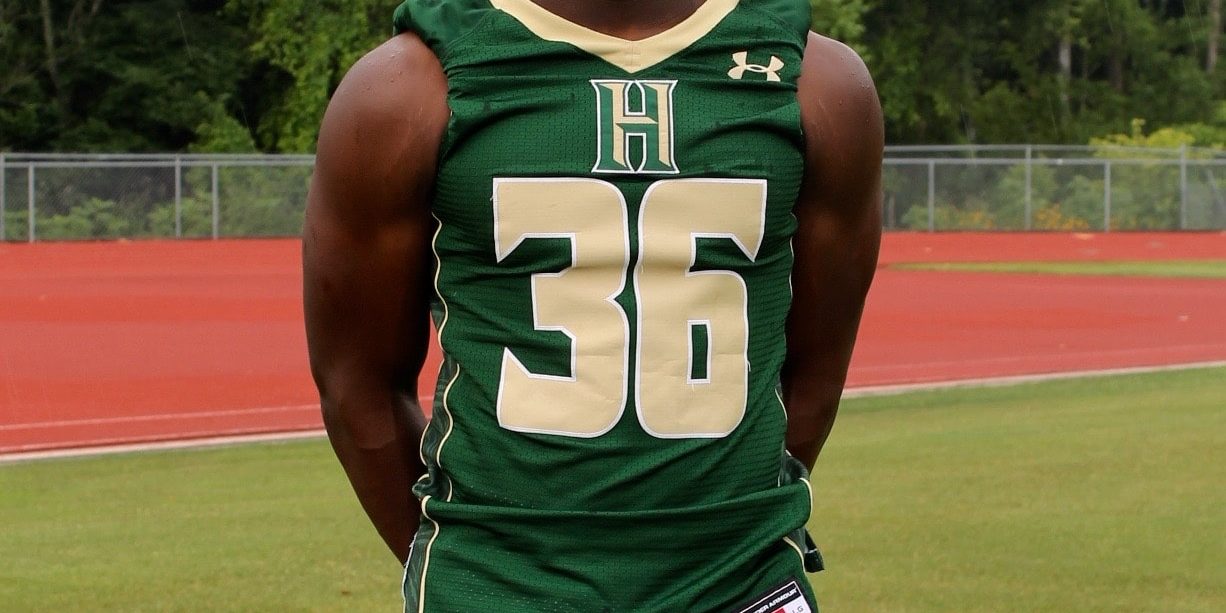 Over a five year period, Highland Baptist senior RB Bronte Griffin has quietly become one of the best running backs in the state of Louisiana. Griffin’s name may not be mentioned with the four to five star recruits in Louisiana, but he definitely plays like some of those guys. Griffin has put up some numbers that many high school players will never accomplish and he has been torching opposing 1A defenses ever since he stepped on the scene for the Bears as an eighth grader. In his debut, Griffin ran for 224 yards and three touchdowns helping the Bears win their first playoff game in program history. That is a way to make yourself known early in your career and ever since, defenses have tried to stop the talented Highland Baptist running back. Over the last three seasons, Griffin has put up some big numbers rushing for at least 1,700 yards and 27 touchdowns. The highlight season for Griffin was when he led the entire state in rushing with a ridiculous 3,000 yards and 42 touchdowns. Do not adjust your screens as you indeed read that right. Those statistics were reached in one season. Playing for a team that just has enough player to play football, there is no question that the Bears run through #36. He is very capable of taking over a game as he has ran for over 400 yards and seven touchdowns in one game. Not only is he the team’s bell cow, but he also starts on defense and is the team’s return specialist. The only time he gets a break is when the team kicks off or punts the ball away, but besides that, Griffin is on the field for every play. By the time Griffin graduates, he will be recognized as arguably the best player to ever come out of Highland Baptist and that definitely deserves some recognition. Louisiana Football Magazine’s recruit expert Lee Brecheen recognized Griffin as one of the best players in the state when he was on the cover of our South Louisiana Magazine earlier in the summer.

“Bronte Griffin is a stud running back,” Brecheen said. “He carries his team that has less than 25 players and is incredibly big to his program as well being a big talent. He is a hidden gem that has already ran for close to 7,000 yards and 100 touchdowns going into his senior season.”

For a guy who has done pretty much everything for his high school team including leading his team to a playoff victory, breaking numerous records, and playing both ways the entire game, it is really shocking to hear that he has not received a single offer from a college to play football. Griffin has the speed, size, and has great side to side lateral agility. Griffin has the whole package and whoever picks him up in the end will definitely be getting a diamond in the rough. In today’s recruit spotlight, we caught up with the Highland Baptist record setting running back as he talked about his top schools, playing both ways, his favorite memories playing for the Bears, what he wants to accomplish the rest of the season, and so much more!

I have not received any offers, but I have talked to multiple schools including ULM, ULL, McNeese State, and Northwestern State.

LAFM: If you had a choice to play at any college in the country, what would be that college and why would you choose that particular college?

That’s really hard, but if I had to pick any school in the country, I would pick my hometown school in the University of Louisiana Lafayette. Why you might ask. Well, why make another state better when I can shine for my home state. With that being said though whoever gives me my first chance, I would, no doubt, play my heart out for them.

LAFM: Before the season started, you were on the cover of our South Louisiana magazine. What does it mean for you to be recognized as one of the best players in the state at your position?

It means a lot to be recognized as one of the best in the state at my position. First, I would have to say I give all glory to God because without him, I wouldn’t be Bronte Griffin. It means a lot because I never thought I would ever make it this far and to be placed in the same boat as some of the best players in the state is not only an honor, but a privilege. It takes a lot of hard work and a lot of growing up.

LAFM: You play on both sides of the football for a 1A team in Highland Baptist and you also play on special teams to boot. Is there ever a time that you actually get a break?

LAFM: You were one of the leading rushers in the state over the past couple of seasons. What are some of your stats of your career and what are the biggest football accomplishments that you are most proud of?

LAFM: It seems that you have a lot of power and speed as well as good size. What do you have to say is your biggest strength as a running back?

Yes, I’ve gotten faster over the years, and I’m also really strong. I rather not say what’s my biggest strength, but if the fans really want to know, it would probably be my mean stiff arm lol!

LAFM: What do you need to improve on the most before playing college football next season?

The thing I would need to improve the most before college would have to be my agility only because one day, I won’t be able to shake and bake and do all the other things I already have combined.

LAFM: As a running back, do you have a favorite play that you like to run?

Well as a running back, I like to run toss not only because of my speed and strength to run over guys, but I like to see my linemen peel back and blind side the heck out of people. That’s really funny!

LAFM: Is there a college or NFL running back that you like to model their running style after?

I don’t really like to compare myself to NFL players because they are just way better than me, but I do admire Mark Ingram (Alabama/New Orleans Saints) when he was in college and Ezekiel Elliott (Ohio State/Dallas Cowboys) now.

Well, our team is very solid for the next couple of years. They are very young and far from being very experienced. They will be really prepared next year and in the following years. This year, if we want to really make a run, we will have to play for each other. We are going to have to come together as one and not think about ourselves and play for the man next to us. Like my Coach Mr. Tim says, CYOG, which means “Cut Your Own Grass.”

LAFM:  A lot of people know you in the Lafayette area as a great football player, but what do you like to do when you are not playing football?

Well, when the football season is over, I love to play basketball with others. Then, I usually hangout with friends to go and support other sports at our school like girls basketball and boys baseball. Then, track starts and I throw the shot.

LAFM: Even for the best football players in the world, football will eventually come to an end. What do you plan on doing when your football career is over?

Well, when my football career is over, I will obviously still be Bronte Griffin. I would like to have my degree in Nursing so that I can start a new hobby.

LAFM: You played football at Highland Baptist since you were in eighth grade. Obviously, you played a lot of football games, but is there one football game that sticks out to you the most during your high school career so far?

Yes, I’ve played football for Highland all my life. Like I said earlier, the two games that stuck out to me the most was probably my eighth grade year when I got my first debut at running back and I helped us win our first playoff game in history playing in the LHSAA. Then, my sophomore year, I played in a game and scored seven touchdowns and ran for 405 yards. That was a really good game to remember.

I would like to thank God most of all. Then, I would like to start thanking my mom, my grandma, Mr. Tim, Mrs. Carol, and all of my coaches I’ve had over the years for all the support and advice sticking by my side through it all.

LAFM: What is your message to the team and the fans of Highland Baptist for the rest of the year?

My message for the team and the fans of Highland for the rest of the year and next year would be to hold it down and everything will be alright.

LAFM: What do you want to tell all of the college coaches and scouts that are looking for a player like you?

I would love to tell all the college scouts and coaches that are looking for a player like me that I am ready and I can’t wait to see who will give me my first chance. I’m ready to play my heart out for whoever.