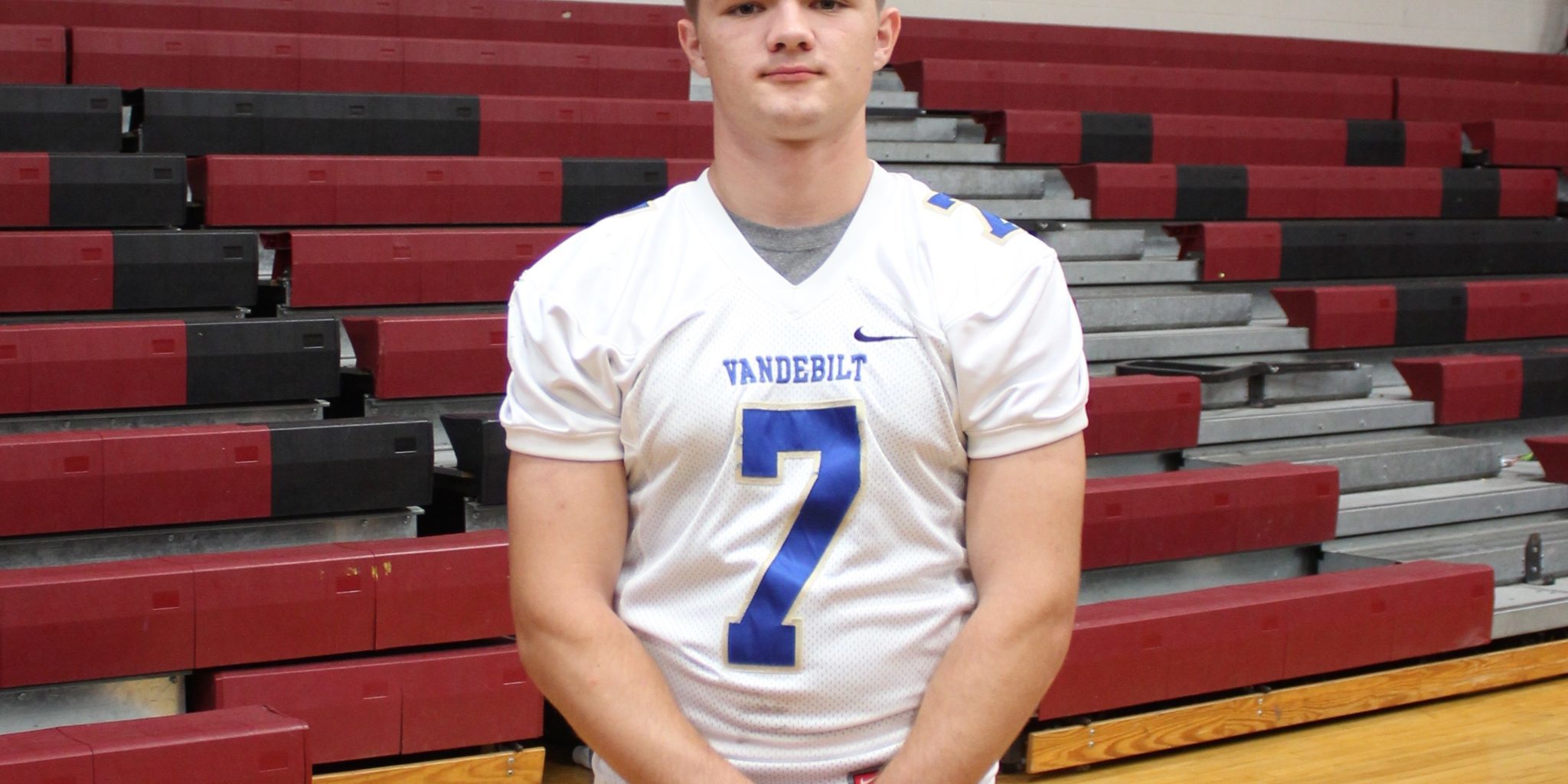 Coming into the 2017 season, the Vandebilt Catholic Terriers had one of the best rushing duos in the state with seniors Michael LeCompte and Brennan Rogers. Last year, the combination of LeCompte’s size and power as well as Rogers’ speed and playmaking ability proved to click during the regular season helping the Terriers win eight games in the regular season with over 1,500 combined yards and 22 touchdowns. Speedy Rogers ran for over 800 yards and 13 of those touchdowns in the 2016 season and he along with his teammate LeCompte were looking to build on a breakout season that got the Terriers seven wins that season. However, the Terriers suffered a big time setback losing one half of that great backfield in LeCompte who went down with an ACL injury in the second win of the season, but the Terriers still had their other All-District running back Brennan Rogers healthy and the Terriers rode him for the rest of the season. As a result, the Terriers did not miss a beat in the running game with Rogers as the main workhorse rushing for over 1,200 yards and 12 touchdowns averaging an impressive eight yards per carry. That helped pave the way for a successful regular season with the Terriers finishing the regular season at 7-3. Vandebilt Catholic’s season may have ended much earlier than the team wanted to as the team lost in the opening round of the Division II playoffs to Archbishop Hannan. However, this is a program that is headed in the right direction after two losing seasons in 2014 and 2015. Brennan Rogers is one of those players that has helped send this program in the right direction. Individually, Rogers ran his way into another All-District season for the third time in his great career. He also finished his career with 3,000 yards rushing and 36 touchdowns. Louisiana Football Magazine’s recruiting expert Lee Brecheen thinks that Rogers could be a great running back at the next level.

“Brennan Rogers has a lot of experience playing football since his sophomore year,” Brecheen said. “He runs really hard to go along with his quick 4.6/40 speed. Not only is he a quick and powerful runner, but he also has some great hands coming out of the backfield.”

With over 3,000 yards rushing and 700 yards receiving, Rogers has the versatility to beat opponents either between the tackles or outside the tackles in the running game as well as making plays in the receiving game coming out of the backfield. So far, Rogers has not made it clear where he is going to attend to continue his football career, but wherever he ends up, he will definitely play a big role. In today’s recruit spotlight, we caught up with the three time All-District running back as he talked about his high school football career, his top schools, his relationship with Michael LeCompte, and so much more!

My name is Brennan Rogers. I’m 18, and I played running back for Vandebilt Catholic.

LAFM: What are your accomplishments while at Vandebilt Catholic?

My biggest strengths are my natural vision, quickness, versatility, and knowledge of the game.

LAFM: What are some things that you need to improve on when you get to the next level?

I believe there is always room for improvement , somethings I need to improve on would be my speed and strength.

I look up to Christian McCaffrey (Stanford/Carolina Panthers) and Elijah McGuire (ULL/New York Jets) because I feel like I have the same running style as they do and also catch the ball out of the back field.

My favorite game was my last game as a high school player. We played Archbishop Hannan. We played a tough first half and coming into the second half around the end of the 3rd quarter, our quarterback got a bad concussion so I went in as the quarterback. I completed passes and played a wildcat type offense and drove the ball down the field and got my team a touchdown. Even though we didn’t win, I felt on top of the world because I know that I left everything I had on the field.

LAFM: You and your teammate Michael LeCompte were a great one two punch at running back. What helped make you two special together and how do y’all complement one another?

Michael and I were definitely great running backs together. Our competition at practice really drove both of us to be the best us that we could be. Unfortunately, Michael got hurt in the second game and I had to take the roll at all time running back. Michael’s ACL injury gave me many opportunities that I am beyond thankful for, but I would trade all of that in if Michael wouldn’t have gotten hurt.

LAFM: You finished your senior season with a 7-4 record. It was a successful season but it ended in the first round against Archbishop Hannan. Even though the season ended earlier than you thought, what do you make of this season overall?

My senior season was my favorite season overall. I had 1,275 rushing yards and scored 12 touchdowns. Memories that I made on each field will stay with me forever and the friends I made during the season will always be my friends.

LAFM: What do you like to do after football season?

After football season, I play soccer. I’ve played soccer since I was 4. I’ve been on varsity since my freshman year when we won state. Besides soccer, I love to fish and ride my 4-wheeler .

LAFM: After two losing seasons in your freshman and sophomore years, the team had back to back winning seasons. What played in the turnaround and what makes you excited for the future of Vandebilt Catholic football?

LAFM: What is your message to next year’s Vandebilt Catholic team?

My message to next year’s team would be strive for perfection, mediocrity is not okay, and to be either a leader or a follower.

First of all, I’d like to shout out anyone who has blocked for me. I love my offensive linemen. One of my best friends I’ve ever had on the team was Zach Trahan (left guard), who now plays for Nicholls State University. Also, I’d like to shout out Michael Lecompte for giving me competition since 8th grade. Finally, I’d like to shout out my quarterback Andrew Robison for being a very talented player. I know he will play college football somewhere big one day.

My intended major is engineering, but depending on where I go to school, I’m most likely going to major in business.

LAFM: What is your favorite running play?

My favorite running play was when I ran a 45 yard touchdown against Morgan City my senior year, which put me over 1,000 yards for the season. As I walked off the field. I got a standing ovation from the fans and every one of my teammates congratulated me. It was a great feeling.

I’m going to miss the heart that everyone plays with in high school. I’m sure at the next level they will play with the same effort, but it’s something about the way it feels to have all your close friends cheer you on or play on side of you.