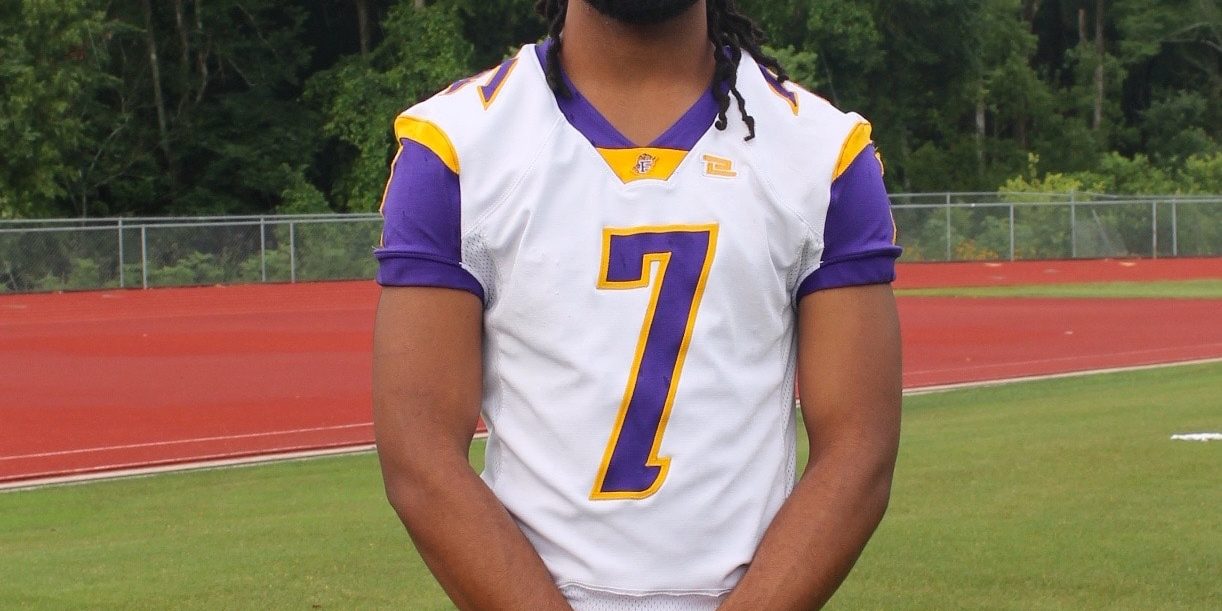 In 2010, Terrence Magee, who is one of Franklinton’s greatest players in the history of the program as well as a former LSU standout running back and current NFL running back, led the Demons to their first and only state championship. The Demons have won a lot of games over that time period, but have not gone back to the Super Dome since that great run almost seven years ago even though the team had a couple of semi-final appearances. Now, the Demons have a chance to go back to the Dome once again and who better to help lead them there than Terrence Magee’s younger brother Tahj Magee. Like his older brother, Tahj Magee also plays quarterback for the team and has put up some incredible numbers including almost 3,000 total yards and 29 touchdowns last season. However, it is just not the big numbers and the position that they played in high school, that makes them similar, but their playing style is similar. Both guys could make plays with their arms and especially their feet, but both guys are really humble, play with a lot of heart, and have incredible football I.Q. Both brothers definitely know the game of football. Also, Tahj Magee is projected to play at a different position in the next level. Even though both brothers are similar in their playing style, Tahj Magee is looking to stand out and become his own player. He does emulate his brother when it comes to playing football, but at the same time, he takes some things from other playmakers that helps him be unique as a football player. Magee had the honor of being on the cover of our South Louisiana magazine for the beginning of the season. Louisiana Football Magazine’s recruit expert Lee Brecheen sees a lot of his older brother when he sees Tahj Magee play, but he knows that he is a very special player.

“Tahj Magee has incredible football I.Q.”, Brecheen said. “He runs well and can play any position in college. I can see him as a slot receiver or a cornerback in college.”

A great football program like Franklinton has seen some great players gone through the program like Terrence Magee, his former teammate Josh Robinson (Mississippi State), Adrian Magee (LSU), Curtis Taylor (LSU), Brandon Taylor (LSU), Chris Briggs (Southern Mississippi), Jhyryn Taylor (LSU), and some others, but it is very safe to say that Tahj Magee will be the next one on that list. He is also setting his own mark as he has already committed to play for Louisiana Tech for next season. In today’s recruit spotlight, we caught up with the Louisiana Tech commit as he talked about modeling his game after his brother, his goals for the season, committing to play for the Bulldogs, being on the cover of the magazine, and so much more!

LAFM: What is your ACT score?

LAFM: What is your max squat and vertical?

LAFM: You have the decision to commit to Louisiana Tech in order to continue your football career. What is it about the Bulldogs that has made you decide to play there?

Honestly, it just felt like a home away from home. I was embraced like family from the very first encounter, and I liked the direction the program was taking. The education also played a big factor for me being able to go somewhere that has the major that I am interested in.

My biggest accomplishment for me was probably last year when I threw for over 2,000 yards and got closer to the all-time leading passing record.

I think my biggest strengths to my game are that for one thing, I have a brother as well as some friends that play in the NFL. I grew up around the game of football so I understand it more than I probably should. Being able to have those resources at my fingertips to ask questions and learn taught me a lot.

I need to work on my route running because I haven’t really done much outside of going to camp and running routes.

LAFM: Last year, the team made the playoffs and finished with a 5-6 overall record. What is the next step for this year’s football team?

The next step for us is just for us to keep getting better everyday and treating everyday like our last. We know what we have to do to get where we wanna be. We are working everyday to get there.

LAFM: Your brother was a great player for Franklinton, LSU, and still is currently in the NFL. He also had similar skill sets like you do on the football field. Do you try and model your brother’s game after yourself or do you try and emulate other players?

I would say I model my game from what he has done, but I didn’t steal a few thing and add to what I had. I try to make my own style of play.

I look forward to all of them because each week is a new way to prove yourself to someone. I feel like everyone looks over Franklinton at times so we play with a chip on our shoulder so I would say all of them holds a lot of weight to me.

I would say my sophomore year vs. Minden in the playoffs. It was tied up 35-35 and we caught an interceptions and returned it for a touchdown to win the game. We didn’t give up and just stepped up to make the play that we needed to make.

LAFM: Is there a quarterback that you like to watch highlights on to help you with your game? If so, who is it and why that particular player?

I always liked watching old Michael Vick (Virginia Tech/Atlanta Falcons/Philadelphia Eagles) highlights or Pat White (West Virginia/Miami Dolphins) highlights. I would always try to do something I seen them do because they were such versatile players for that position. They threatened to beat you multiple ways at once.

I honestly like to just relax for a little while then go back to work for the next go around. I sit down and watch film from the previous year so I can fix all my mistakes and improve.

My goals are to just be more of a leader and play my best so that I can lead my team in the playoffs this season and make it one to remember.

LAFM:  You are a great athlete and can play multiple positions in college. What position do you personally want to play and why?

I want to play receiver. I always have had a passion for it and am natural to the position. I played in junior high and pewee. I never wanted to change, but I had no choice in high school.

First, I would like to thank God for blessing me with talent to play the game of football. I would also like to thank all my family members and outside people that I consider family. If it wasn’t for them and God, I would not be the person I am today.

Honestly, it didn’t seem real to me when I found out that I was going to be on it. I always felt underrated since I got in high school. I was always well known in my community but as far as outside of it, I didn’t feel like I had reached those people yet. It’s just a blessing to be recognized with such a great group of guys that are going to do great things.

LAFM: What makes you special as a quarterback or as an athlete in general?

I think just being able to play any position on the field and understanding it makes me special. Even when I’m uncomfortable in a position, I’m still comfortable because I’m so versatile.

For me to lead my team to another state championship would mean the world to me and the town of Franklinton. We are a close community, and they support us to the fullest. The chance to bring the second state title to Franklinton and just going out on top as a senior adds icing on the cake.