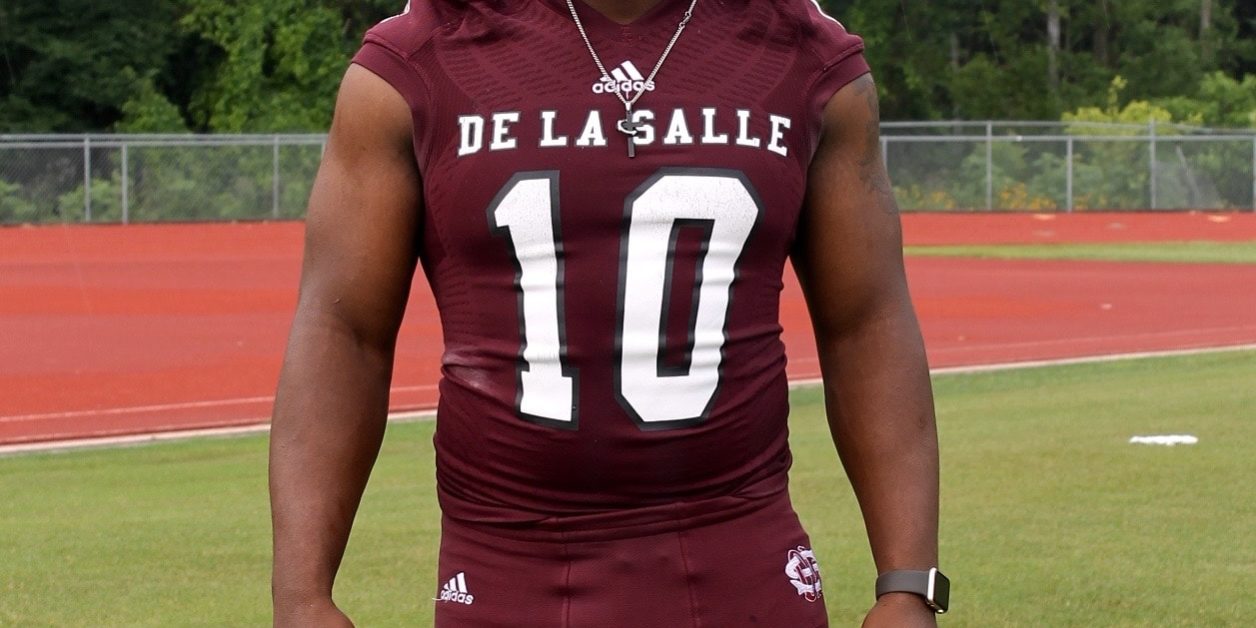 As a student athlete, one must be able to balance school and football (among many other things) at the same time. This is something that Julien Gums is able to do very well by putting academics first and then being able to put his whole focus on football after his academics are taken care of. This has helped Julien Gums be successful in the past three years playing for the De La Salle Cavaliers. As a sophomore, Gums was placed as the starting quarterback and running back for the Cavaliers. Throughout his season, he has been able to become more involved and has evolved in a double threat being able to successfully play both quarterback and running back in the same game. Gums was recently given the honor to be named District 9-3A offense MVP, All State, and All Metro with 1,141 yard passing, 20 touchdowns and only two interceptions as a quarterback. He also ran for 575 yards and 10 touchdowns in the same season running the football. Julien Gums will be the starting quarterback for the Cavaliers in their 2017-2018 season. He is already showing off his skills scoring a touchdown of his own and making a play to BJ Randle for two touchdowns passes in the first half to defeat South Lafourche 39-7. Losing last year’s state championship has fueled the Cavaliers to make another run to the Dome this year. Louisiana Football Magazine’s recruiting expert Lee Brecheen believes that the Cavaliers can do a lot of great things this year with Gums at quarterback which was a big reason why Brecheen put Gums on the cover of our South edition of our magazine.

“The De La Salle offense has a chance to be one of the school’s best ever with Julien Gums back,” Brecheen said. “Trying to tackle Gums is like trying to tackle a fullback and he also has 4.6/40 speed to add. He is built like a tank and could play running back or linebacker in college.”

Last year, Julien Gums received an offer from Nicholls State to play at the next level and is very pleased to have accepted the offer from Nicholls state. We, at LAFM, can’t wait to see him grow and lead his new team this year. In today’s recruit spotlight, we caught up with the Nicholls State commit as he talked about playing multiple positions, committing to play football for the Colonels, this season’s goals, and so much more!

Being able to pull my team together and find a way to win tough football games.

LAFM: What is your favorite position to play and why (QB or RB)?

Running back, because I think running the back is very important to the offense and it’s a very fun position to play.

LAFM: What were your most memorable accomplishments while at De La Salle High School?

Being able to become the starting QB my 10th grade year and finishing out with 9-2 season as well as my 11th grade year winning district with a 10-0 season first time in history.

I love to help out the community, help people with their problems, share with my friends and family, and always know family comes before anything.

LAFM: The Cavaliers had just won the district championship and were on their way to the state championship with a 13-1 season until the team lost to Parkview Baptist. What are your thoughts on how the end of the season turned out as well as what improvement should be made for this year’s season?

Last year’s season was great until the lost in the playoffs. The lost was hurtful and depressing with the way we played. For this year’s season, I will work hard and never give up on my teammates, become a better QB for the team and hoping to make history with winning a state championship.

Lutcher Bulldog’s QB (Jontre Kirklin) because he is a great player and hard to tackle down.

LAFM: What are some things that you have picked up from Coach Ryan Manale that has helped you in your game today?

If you work hard, your game will improve and when you play better, you will win more games. Be the best you can be, be accountable, and always be disciplined.

LAFM: What is your advice for next year’s De La Salle football team?

Always know school and grades come first before football. Make your season the best season you ever played. Work hard, play hard, and encourage your teammates to do better and become a better person.

LAFM: You have recently received an offer from Nicholls State. Have you made a decision to play for the D-1 school?

That’s one of the best things that ever happened to me but Yes, I did make a decision to play for the school.

My running game, footwork, my speed, maintaining my weight and size, always being a leader on the field, and having fun.

Drew Brees (Purdue/San Diego Chargers/New Orleans Saints) because he is a hard working man and amazing guy. He has always been my favorite role model for the game of football.

I am thankful for my friends, family, my mentors, my coaches, role models, teachers, and most of all,  I thank God.