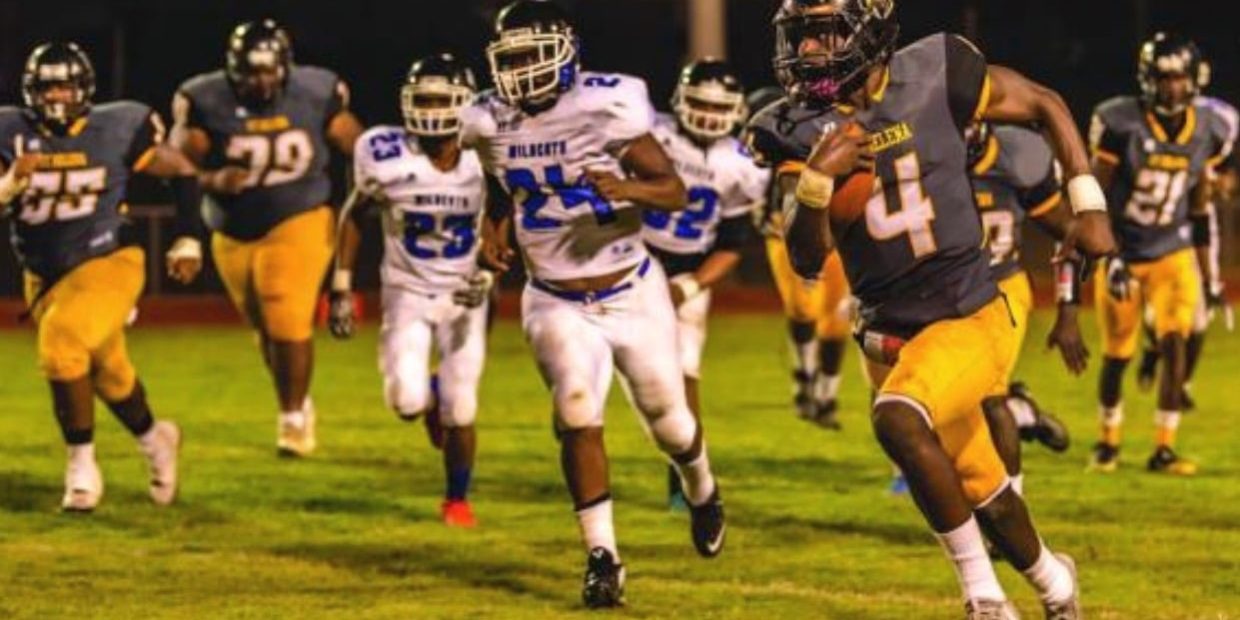 Under Brandon Brown‘s tenure at St. Helena College and Career Academy, all the team has done is continue to improve each and every season. In Brown’s first year, the team won two games. In his second year, the team won three games. In his third season, he led the team to a 7-5 season as well as a playoff win. In his fourth season, he led the team to not only a district championship but a semifinal finish. That leads to this season as the Hawks made it to the Superdome for the first time in program history. This recent success goes back to a motto that Coach Brown has been preaching since his arrival.

“Ever since I have been here, I always told them that we are building this program brick by brick,” Brown said. “You would see this motto on our T-shirts, you see it on our weight room. We are going to build a solid program and we are going to build it brick by brick. After that year in which we reached the semis, those kids took it upon themselves that they were going to play for one more week after losing in the semis-finals. That provided us motivation throughout the years.”

When Brown took over the program, this was a team that had trouble winning football games. Now, they are a football powerhouse. It was not always easy for Brown and the rest of the coaching staff to turn around the program day one as you need players in order to make that happen especially at the most important position in quarterback. However, they found one in a 6-3, 200 pound freshman back in 2014 named Ricky Travis. Coach Brown knew that the team was going to roll with the young athletic quarterback right then and later in the future.

“We knew that he was a young and inexperienced quarterback coming in, but we also knew that we would be way better down the road with him so we decided to roll with him,” Brown said.

The decision did pay off as the four year starter was named All-District every year of his career including being named first team and second team as well as being named All-District MVP his junior year. When Louisiana Football Magazine’s recruit expert Lee Brecheen saw Ricky Travis play in person, he realized that he is not only looking at a guy who can play on Saturdays, but on Sundays as well.

“Ricky Travis is the best player I saw in 2017 that the DI schools missed on,” Brecheen said. “This kid can throw a football 70 yards on a rope, runs a 4.5/40, and runs over people trying to sack him with a big boy stiff arm. He reminds me of a young Doug Williams (Grambling/Tampa Bay/Washington Redskins).”

Obviously, Brecheen has a lot of praise for the St. Helena star, but he is not the only one that has seen his special attributes as his head coach knew from the start about what kind of ability he actually had early on.

“When Ricky was either a freshman or a sophomore, we were playing in our jamboree against Jewel Sumner,” Brown said. “He rolled out into the right hash, stopped, and made a throw on a rope to the opposite side. It blew me away and I told him that was a NFL throw.”

As a dual threat quarterback who has great size and 4.5/40 speed, it may be his arm strength that sets him apart.

“My biggest strength is my arm,” Travis said. “It’s very strong. Once I get going, it’s hard to stop my arm or my legs. They are just as powerful because of the speed I have when I move out the pocket you have to think before I do because you never know if I’m going to pass or run. I look at myself as a dual threat quarterback that loves the spread RPO offense.

Travis is confident in his abilities as he agrees with both Brecheen and his head coach, but at the same time, he is humbled by the compliments and is ready to work even harder.

“Well Mr. Brecheen is right about my future because I believe that I’m one the best athletes in the state of Louisiana,” Travis said. “I will give you 110% every Sunday night as a NFL superstar. Getting there would be a dream because I have been wishing for all my life as a kid getting closer and closer to it learning the game of football is just amazing.”

Travis has always had the natural born talents, but what has been more impressive has been Travis’ work ethic and leadership improvement over his four years according to his head coach.

“What made him special is his ability to get better each and every day,” Brown said. “He continued to work and improve. Even when the success started to come his way, he was still able to improve. Early on, I tried to tell him that he was our leader, but he kind of shied away from it as a freshman and as a sophomore. Once his junior season came, he took it upon himself to be that leader.”

As he improved, the rest of the team improved. From starting his freshman season winning only three games to winning 12 games and making it all the way to the Class 2A state championship game to play a Welsh team that was also making a rare appearance in the Mercedes Benz Superdome. Unfortunately, the result did not go the team’s way as the Greyhounds defeated the Hawks 38-26, but for Travis, looking back at his four year journey, it was all worth it.

“Yeah, we fell short of our goal, but we changed the community in the small town called Greensburg,” Travis said. “We had the fans, the support,and the love. I was proud as a freshman coming in and playing quarterback, but it wasn’t easy. I didn’t understand the game and wasn’t working as hard as I needed to leading up to a 3-8 season, but as I got older, Coach Brown told us we had to change and build everything brick by brick. We did that so I feel like our goal was still accomplished in my eyes because we came from being nothing to something. That is something nobody would thought we would do, but don’t get me wrong losing in the state championship did hurt. I still think about it, but I know I got life and better things ahead.”

That is what Travis is focused on right now as he tries to get ready for the next level. The two star quarterback has received offers from schools such as Louisiana Tech, ULL, ULM, Southern Miss, and Jackson State, but it was his passion for Grambling State University that made him want to commit. There may have been a few setbacks that have forced Travis not to sign with the Tigers in either signing period, but he is determined to sign with the school he committed to in the end.

“I’m not signed with Grambling right now because my core GPA is a little low,” Travis said. “I am taking online classes currently, and I’m almost done with them in order to get my GPA up to where it needs to be. Then after I’m done with that, I will be signing my offer that they are holding to Grambling State University. I’m not looking at no one else. Grambling is the school I’m 110% with.”

Brown even confirmed that his star quarterback is all in with Coach Broderick Fobbs‘ team and that the senior’s determination and work ethic has even intrigued the Tigers to wanting him even more.

“His ACT is good and his core is actually pretty good,” Brown said. “He is just on the borderline of Grambling’s requirements. Grambling has been talking with me and they have been telling me how much they love the kid. They asked me if he had any other junior colleges or other offers because they want to see him at Grambling. I told them that he shut down his recruitment to be with Grambling and that is where he wants to be. It also turns out that Grambling has shut down their search for quarterbacks in order to get Ricky. Right now, it is a wait and see approach as he has a couple of more classes that he needs to take. As long as he takes care of his classes, it is set for him to sign in May. The ball is in his court.”

Travis is grateful for everybody that has helped him along this process in order for him to even have a chance to play at the next level as he is working hard to get that accomplished.

“First I like to say thank you God because I could not have done this without him, but I would love to thank my parents, coaches, and also my brothers because it wasn’t easy everyday to push your body to do what you love the most even when I was tired and didn’t want to do it,” Travis said. “I just want to thank my family, coaches, and most importantly, my teammates for not letting me give up on my dreams.”

As a result, Travis is making sure that Grambling will get a great player in the process once he takes care of his business.

“Like I said, I’m just me,” Travis said. “Everyone knows me, loves me, and knows what I can do as a football player when I step on that field. It’s all business with me when I’m up and going.”

For Ricky Travis, he is not only an exceptional talent, but he is special in the fact that he only wants to be even better whether it is on the football field or in the classroom. For a school like Grambling to be waiting on him means a lot to what kind of a player he can be. If Ricky Travis can indeed sign with the Tigers in the end, it will be worth the wait.

Hey football fans. Like our recruiting interviews, stories, and other content on our website? Click on our website daily to view articles on recruits, coaches, and so much more at our website: http://www.lafootballmagazine.com/. Also, we have exciting news that for the second straight year, we will have both a North and South Cover in 2018! Both issues will continue to cover all the Louisiana colleges as well as all the high schools in state, but there will be 16 pages that will focus on North Louisiana as well as South Louisiana. You can still order our 2017 issues on our website.