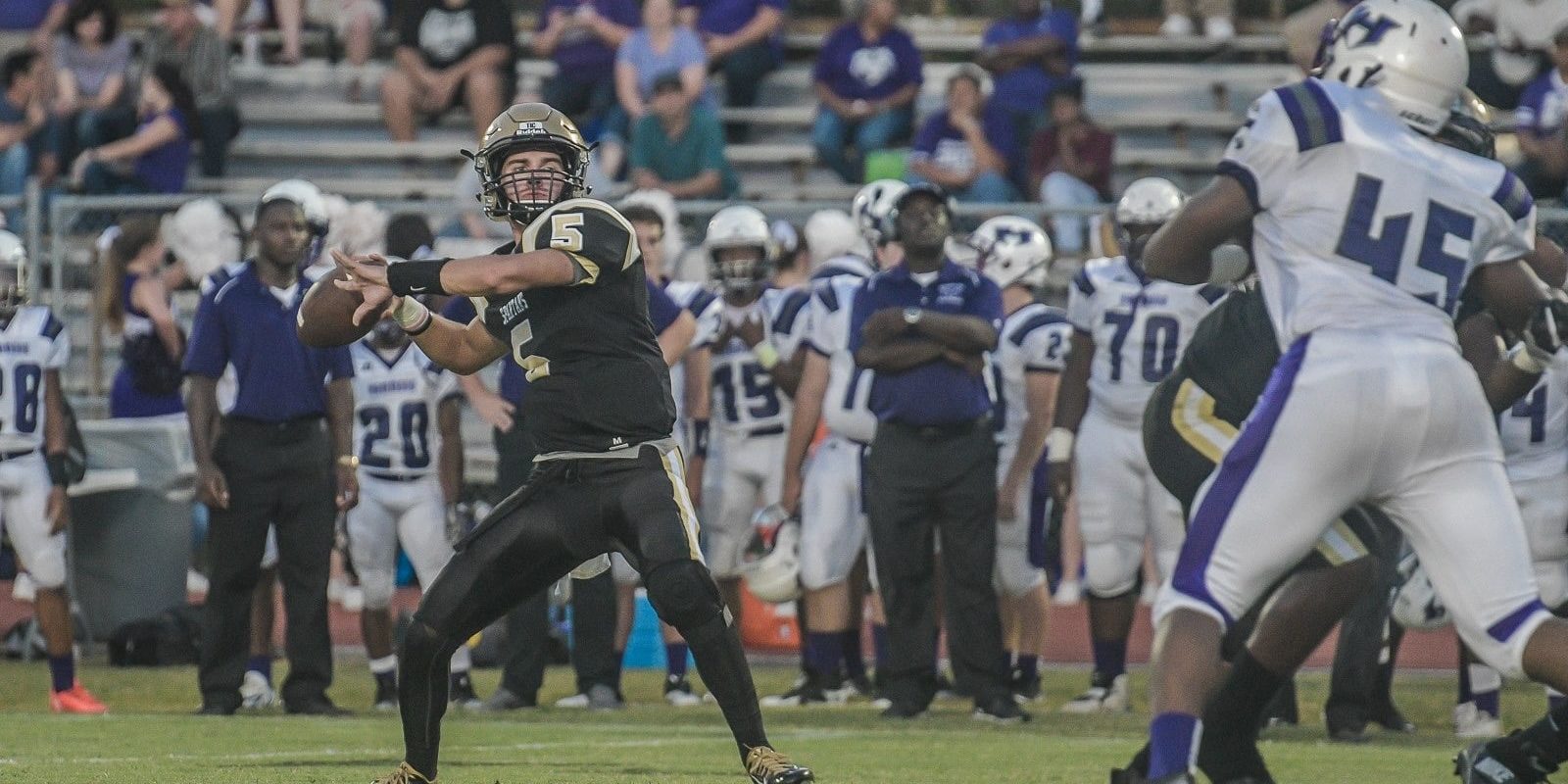 LJ Leonard is a dual-threat quarterback that also leads the special teams as their punter. His sophomore year, Leonard was the starting quarterback and punter for the Salmen Spartans. LJ Leonard has simultaneously played both positions so well. He earned 2nd Team All-District as a punter and 2nd Team All-District as a quarterback in 2016. He enters his third season as the team’s starting quarterback and punter as he mentions his ability to kick the ball comes from years of playing soccer. LJ Leonard has also attained the opportunity to play for his dad and 16-year Salmen Head Coach Jerry Leonard, which LJ Leonard mentioned was a dream for him since he was a kid. Last year, the Spartans were 5-5 (1-3 and fourth in District 8-4A) losing to Carencro 35-3 in the opening round of Class 4A playoffs. This year, things are looking differently. The Spartans started their season with a win against Madison Prep Academy (21-20) where LJ Leonard worked well with teammate cornerback Eddie Smith for some impressive passes like the 32-yard pass and 55-yard touchdown pass. Last week, Salmen won their home non-conference game against Hammond High Shcool by a score of 69-38. During the game, one can see LJ Leonard making some sharp passes to his receivers for touchdowns. He accumulated  390 rushing yards during his game against Hammond. Louisiana Football Magazine’s recruit analyst Lee Brecheen believes that the son of the longtime Salmen head coach is a very underrated player.

“QB LJ Leonard is a leader as well as the coach’s son,” Brecheen said. “Not only is LJ a good quarterback, but he is one of the state’s top punters.”

LJ Leonard has been recognized for his versatile ability on the field by multiple colleges, which include University of Southern Miss, Millsaps, South Alabama, Southeastern Louisiana University, Houston Baptist and most recently Louisiana College. We can’t wait for LJ Leonard to throw some long passes and make some runs tonight at Salmen’s away non-conference game at Bogalusa at 7:00 P.M. In today’s recruit spotlight, we caught up with the senior Salmen quarterback as he talked about playing for his dad, the great start to the season, and so much more!

My strengths are reading coverages, throwing the ball accurately to short and intermediate routes, and avoiding pressure when needed.

LAFM: What is your favorite position to play and why (QB or Punter)?

I really enjoy playing both positions. I like QB because you get to be the leader of the offense and be in control. I like being the punter because it brings me back to my younger days when I played soccer.

LAFM: What were your most memorable accomplishments while at Salmen High School?

Being part of the “Buddy Program” and helping with the Special Olympics for the past two years have been a great accomplishment for me. I have really enjoyed this experience and hope to continue to help with this program in the future. I am also proud of being on Salmen’s Honor Roll every semester.

My mother is in the Hall of Fame at Millsaps College where she played soccer. I play the piano and the saxophone. I have played soccer since I was four until my sophomore year of high school on a competitive/travel team.

LAFM: What are your thoughts on how the end of the season turned out as well as what improvements should be made for this year’s season?

Last year, we didn’t score a lot of points on offense and had to rely a lot on our defense. This year, we plan to score more offensively and limit turnovers.

Derrius Guice (Catholic-BR/LSU). We played against him my freshman year. He was a beast. The thing that I liked the most about him was that he was a team player. He not only played RB, but he was also on special teams.

LAFM: What can you tell our readers about how it feels having your Dad, Jerry Leonard, as your football coach?

It has been an honor having my dad as my football coach. I have grown up at Salmen being their ball boy since I was five years old. I have always dreamed of being a Spartan and playing for my dad. He has been very tough on me as a coach, but he has high expectations for all of his players both on and off the field. He is so knowledgeable about football, and I have loved being able to spend these last four years with him as my coach.

LAFM: What are some things that you have picked up from Coach Leonard that has helped you in your game today?

LAFM: After winning against Hammond High School (Sept. 15), what do you think are some things you and the team need to still focus on for the upcoming game against Bogalusa (Sept. 22)?

We still need to limit the penalties and mistakes on both sides of the ball. All we are trying to do is to stay 1-0 every single week.

LAFM: What is your advice for next year’s Salmen football team?

Don’t worry about all of the distractions/offers and social media. Just work hard, focus, and be determined to be the best Spartan you can be.

LAFM: You have recently received an offer from Louisiana College. What other college offers are you also considering?

Daniel Sams (former Kansas State and Mcneese State QB). Growing up, I watched him play at Salmen. He was a dynamic playmaker and fierce competitor.

I would like to thank God for his continuous blessings, my entire family for all of their support, and all of my teachers and friends.