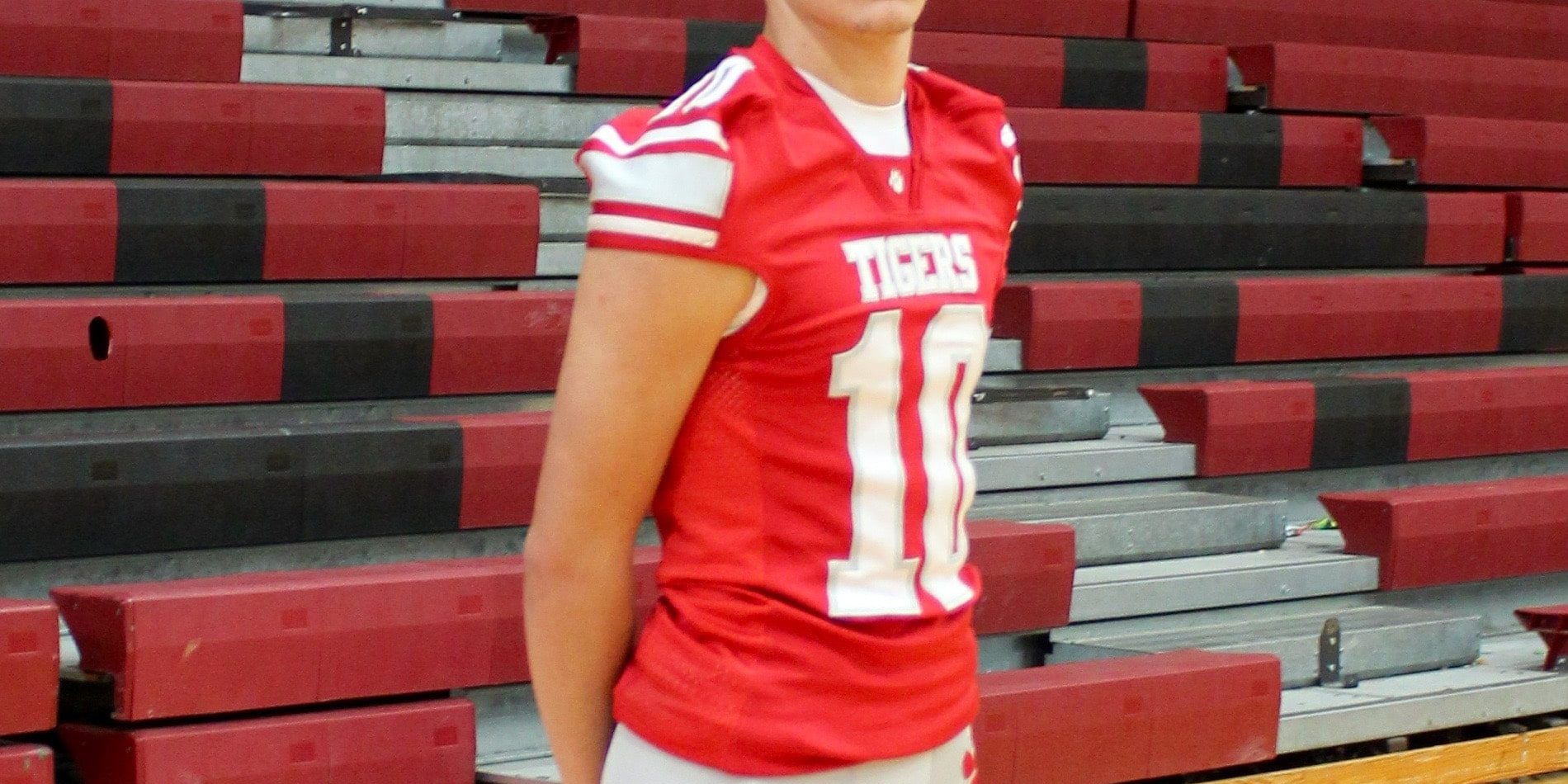 Jake Cooper has been part of the DeQuincy athletic department since he was a freshman competing in four different sports. Cooper has been part of the track, baseball, basketball and football team. He also participated in the Long Jump and High Jump last year as a junior. He was easily able to balance the transition into each sport. Despite only making it to four meets, he managed to achieve 1st place in the High Jump and was named “Outstanding Male Athlete” at the district meet. Winning district sent him to regionals where he won 1st in the High Jump. He then had the opportunity to represent DeQuincy high school in Baton Rouge for the state meet in the High Jump category.  As a football player, he played receiver his junior year and in week three of this season, Coach Charlie Smith placed him at the quarterback position. As a quarterback, Cooper has been able to show his prominent ability to lead the Tigers’ offense. Louisiana Football Magazine’s recruiting expert Lee Brecheen loves how the Tigers are using Cooper’s athleticism and versatility.

“Jake Cooper is a really good athlete,” Brecheen said. “Not only is he the quarterback for the team, but he also plays defensive back for them as well. He is a great leader and has 4.55/40 speed.”

In Week 6 against the Pickering Red Devils, he accounted for 257 passing yards, three touchdowns, and 39 rushing yards. In Week 8 against the Vinton Lions, he ran for 178 rushing yards, four touchdowns, and passed for 56 yards. These two games show Cooper’s ability to pass and run the ball efficiently. Even though he has not received interest from colleges so far this season, becoming the new starting quarterback might change Cooper’s chances. In today’s recruit spotlight, we caught up with the DeQuincy senior QB as he talks about his career, his biggest strengths, and so much more!

My ability to read the defense and know the choices I have with the ball before I ever start the play are my biggest strengths. I feel my run game is a big part of the type of player I am. I pass the ball fairly well in my opinion. I can get the ball to my receivers who make my job so much easier. If I had to choose my biggest strength of my game though, it would have to my rushing with the football.

LAFM: You play many different positions. Which one is your favorite position to play and why?

I played receiver my junior year because we had a senior quarterback come in and I was completely willing to do whatever was best for the team and go to whichever position they needed me in most. This year, I started out playing receiver for the first two games. I was moved Week 3 to the QB position, and I’ve loved every second of it. I would have to say that QB is my favorite position to play because I am the leader of my offense, and I control what happens with the ball. If something goes wrong, it is my fault and if something great happens, I get the credit. I love having that responsibility and being able to say I’m a leader.

LAFM: What were your most memorable accomplishments while at DeQuincy High School?

I’ve ran track since my freshmen year but last year, I started doing the Long Jump & High Jump for the first time. Playing baseball also, I had to miss some track meets, but I managed to make it to four meets. I managed to accomplish 1st place in the High Jump and was named “Outstanding Male Athlete” at the district meet. Winning district sent me to regionals where I won 1st in the High Jump there also. I then had the opportunity to represent my school in Baton Rouge for the state meet in the High Jump.

LAFM: The Tigers had a 7-5 regular season before losing in the second round of playoffs against St. Helena College and Career Academy last season. What are your thoughts on how the season turned out as well as what improvements should be made for this year’s season?

I thought we had a great year, and our seniors were great leaders towards us younger guys. I feel like we had a very good chance to win that game, but it’s football. You win some and you lose some. There were no improvements needed for this season. We had many seniors graduate so basically all we had to do was fill the empty positions needed. Besides that, I think everything else was perfect and we were prepared for the upcoming season.

I’ve played against some very great players in my career, but if I had to choose someone, I would have to say Tony St. Julien (Vinton). He’s a great guy. I know him personally as a friend. He’s the real deal, and the guy can flat out fly running the ball.

LAFM: What are some things that you have picked up from Coach Smith that has helped you in your game today?

Coach Smith is a great coach, and he has taught everyone on the team so many things. He knows the game very well, and he knows how to win. Our football team is more than a team because of him. We are a family. His famous phrase ,that if you ask anyone who has ever played for him can tell you, is “this game can teach you how to live if you let it.”

Don’t take any of it for granted because it flies by and before you know, its over. Make every second count and act like every play is your last because you never know when it will be. I wish all the luck in the world to next year’s Tiger football team, and I love all you guys to death.

I need to increase my size and my knowledge of the game. It’s never bad to know too much.

I model my game after Cam Newton (Auburn/Carolina Panthers) because he’s a dual-threat QB, and I wish to be the same one day at the highest level.