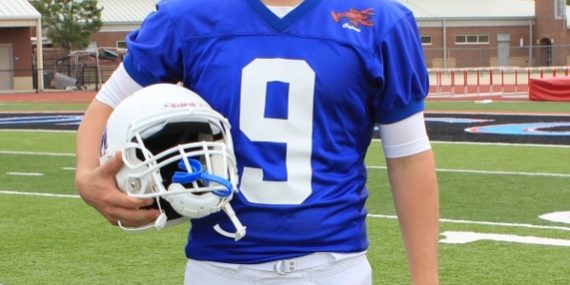 One of the most underrated programs in the entire state is Metairie Park Country Day. The Cajuns, led by Head Coach Joe Chango, have proved to be a contender in 2A after moving up from 1A. This is a football program that has consistently had winning seasons over the last couple of years. Even though the Cajuns had found success on the gridiron, the team seems to be very underrated and not mentioned enough as one of the most consistent teams in the state. Metairie Park Country Day senior QB Christian Kerut was the epitomy of the Cajun’s program when it came to being undervalued. Kerut is everything that an offensive coordinator or a head coach would want in a quarterback. At 6’3, 215, Kerut has good size, but at the same time, he is a very good athlete who also played baseball and basketball throughout his high school career. The best thing about Kerut was his knowledge of the game. He would do anything to keep his team in the game and knew how to limit turnovers. In his senior season, Kerut threw for over 2,000 yards and 23 touchdowns while only throwing for four interceptions. The most important quality that a quarterback can have is leadership and he also possesses that quality. As a junior, he was voted team captain by his teammates. The only problem for this senior quarterback was that he was a three sport athlete, and in the end, he had to decide one sport to play for. The talented three sport athlete decided to trade his football helmet and his basketball jersey for the baseball uniform and the bat as he is expected to play baseball at Davidson College. Even though his football career has ended, he has helped the Cajuns make the next step as a rising football program, and that is something that should not be overlooked. In today’s recruit spotlight, we caught up with the senior Metairie Park Country Day QB as he talked about his high school career, playing three sports, and so much more!

Metairie Park Country Day senior QB Christian Kerut has accounted for over 5,000 passing yards and 50 touchdowns during his career playing quarterback for the Cajuns. (Photo courtesy of the Kerut family)

LAFM: What are your stats and accomplishments while at Metairie Park Country Day?

My career stats are 330 of 530 for 5,976 yards and 56 TDs. I was also voted team captain both my junior and senior year, which was pretty important to me.

LAFM: Are you planning on playing football at the college level?

I will not be playing football next year but I may be going to play baseball at Davidson College (waiting to hear back from admissions).

LAFM: What were the biggest strengths to your game as a quarterback?

My biggest strengths are my arm, intellect, and awareness. Coach Chango took over the program heading into my junior year, and he implemented a new offense that I picked up on quickly. I felt like I was always pretty aware of how much time I had in the pocket, and I thought that I could always throw the deep ball with good accuracy.

LAFM: What were some areas to your game that you always had to improve on?

I have never been one of the fastest kids on my teams so I knew I had to work on my footwork more than anything. Coach Chango always stressed the importance of being mobile enough to be able to escape pressure, and I felt like I improved on that from junior to senior year.

LAFM: Who was the college or NFL quarterback that you modeled your game after and why?

I have always tried to model myself after Andrew Luck (former Stanford QB currently with the Indianapolis Colts). I’ve always envied his ability to make every throw, but also be a great leader to his teammates.

LAFM: What was your best game while at Metairie Park Country Day and why?

The best game of my career was at Ouachita Christian during the first round of the playoffs my junior year. I finished with 524 yards and 4 TDs. We came back from a 21-7 halftime margin to win 42-35.

LAFM: The Cajuns quietly had a great season going 9-3 and losing to a really good Notre Dame team in the second round of the playoffs. Even though the result didn’t result in a state championship, what are your thoughts on last season as a whole?

Well we improved from my junior year winning one more game in the regular season. We started off the season going 8-0, but then lost our next two games to Riverside and St. Charles, but when we played Menard in the first round of the playoffs, we thought we were well prepared and we went out and executed. Notre Dame was just an all-around great program, and they were just too much for us. Overall, it was a very fun season.

First and foremost my offensive line, then Price Petagna and Chandler Wynne who made me look way better than I actually am, Jake Gitter, Patrick Kern, Jack White, and the rest of the seniors.

LAFM: What is your advice for next year’s Metairie Park Country Day team?

My advice to them is that since a lot of starters are graduating, be patient with the process throughout the year.

I’m gonna miss the group of guys I got to play with and the friendships I’ve made. Also, just messing around with Coach Chango and the whole staff during workouts or film sessions. I’ll miss a lot too.

I played basketball and baseball for Country Day all throughout high school so I found myself keeping busy. I’m trying to pick up golf now but it’s not going so well.

LAFM: If you had to go back to play one more game, who would it be against and why?

I would want to have one more shot against Riverside. Both years playing them we hung around with them until the second half when they pulled away. I played poorly against them this year and would love to get the chance at making it up.

I am planning on majoring in either biology or engineering.

LAFM: A lot of people don’t talk about the success this team has had in recent years. Do you think the Cajuns are underappreciated when it comes to being one of the most consistent teams in the state?

Since Coach Chango took over two years ago, the Country Day community has perceived the program differently. I definitely think we’re a little under appreciated, but these last two years have propelled us in the right direction.

Metairie Park Country Day senior QB Christian Kerut looks back to the coaches to get the play call in. (Photo courtesy of the Kerut family).

My uncles all played football in high school, but my dad swam at the University of Southern Mississippi.

I would like to thank both of my parents for all of their sacrifices and support throughout my entire life. Without them, I honestly do not know what kind of man I’d be today. Secondly, I was hesitant about even continuing to play football my Junior year until I met Coach Chango so I would like to thank him for bringing out my love for the game.

LAFM: What made you stand out the most as a quarterback more than anybody else in the state last season?

I think my quick decision making and arm are what made me stand out as a QB. Coach Chango’s offense suited me perfectly and put me in a great position to succeed.