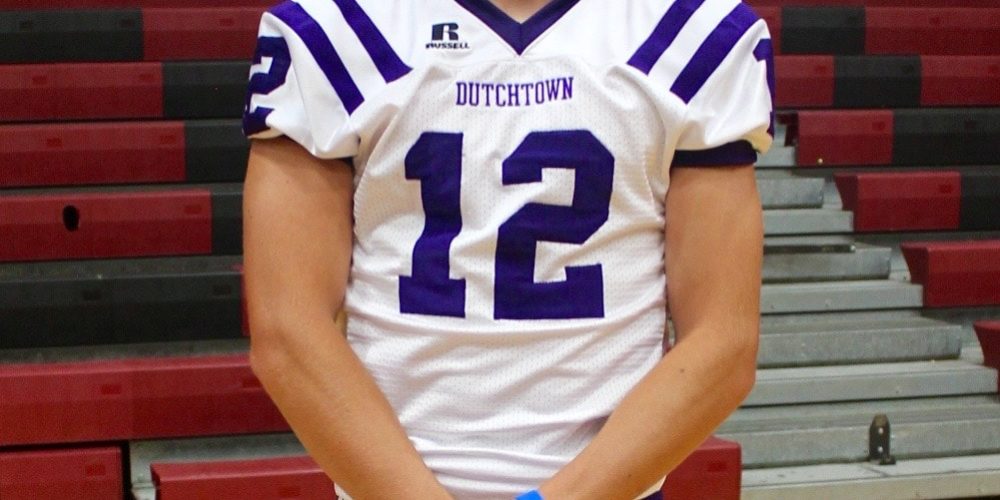 Every year, there seems to be a lot of sleeper quarterbacks that come out of Louisiana and this year is no exception. Looking at the Baton Rouge area, Dutchtown senior QB Ben Mays is one of those quarterbacks that nobody knows about right now, but will definitely get to know by the end of the season. Not a lot of people have heard of him because he had first started for the Griffins last season and is still developing his game. However, based on natural talent, Mays definitely has a chance to be a very special quarterback. He is a big guy at 6-2, 200, has a great arm as well as a quick release and is also very athletic. The biggest aspect of his game is working inside the pocket and being opponents with his arm as well as his knowledge of the game. If he continues to improve, a college will definitely get themselves a big time diamond in the rough. Louisiana Football Magazine’s recruiting guru Lee Brecheen put Mays on the South Louisiana cover when we did the photo shoot at Dutchtown High School early in May because he just loves the talent that Mays has as well as his huge upside as a quarterback.

“I think Ben Mays is a big time sleeper,” Brecheen said. “He has a good arm, good release, and good feet in the pocket. Mays also runs a 4.65/40. 2016 was his first year as a starting quarterback playing in game action, but in the end, he can become a DI or I-AA quarterback.”

Even though Mays has only started a full year and only a couple of games under his belt for this season, he already has attracted attention from a lot of schools and even received his first offer from McNeese State University. Ben Mays just seems that he does not have any blaring weakness and if he goes to the right school, the sky is truly the limit. In today’s recruit spotlight, we caught up with the senior Dutchtown quarterback as he talked about the transition from playing under Coach Benny Saia to playing for Coach Guy Mistretta, what makes him stand out most as a quarterback, being on the cover of the magazine, and so much more!

LAFM: I believe this is your second year as the starting quarterback for Dutchtown. What do you think you have improved on the most since your first start?

I’ve gotten used to the speed of the varsity game. Everything feels smoother and I can process things quicker during the plays.

It’s a great honor given that there are so many other valid candidates to be on the cover. Louisiana is loaded with talented athletes so I’m grateful to be considered among the best here.

I would say being team captain both my junior and senior year.

I have a strong arm, which makes it easier to throw the ball deep and into tight windows. I also run the ball pretty well so it keeps the defense honest.

I need to get more consistent at setting my feet on throws when I’m under pressure.

LAFM: Have you received any offers from any colleges? If not, have any colleges shown any interest?

I have an offer from McNeese State University and some of the schools that I am receiving interests from include Princeton, Cornell, Harvard, and Southern Miss.

LAFM: Last year might not have been what the team wanted especially for Coach Saia in his final season as Dutchtown Head Coach going 4-7. What have you learned from him last year and how did the results of last season give the team motivation for this season?

We’ve become resilient given the hardships we went through last season. This has translated to a very hungry team this year that is looking to avenge last year’s poor performance.

LAFM: This is Coach Mistretta’s first year as Dutchtown’s Head Coach and the second in the program’s history. What has been his approach to this team since he has taken over?

Coach Mistretta has rejuvenated the program with tons of energy and leadership from a coaching standpoint, which has led to players giving a lot more effort at practice. He has also encouraged more leadership among the players within the team.

I definitely model my game after Tom Brady (Michigan/New England Patriots). I love his competitiveness, work ethic, and the fire he plays with during games.

I play on the baseball team at Dutchtown so my off-season is full of baseball. I also love to be in the weight room lifting weights.

My goal is to lead my team to a district championship. It would be a huge turnaround given the unsuccessful season we had last year and prove that the new coaching staff as well as the philosophy has paid off.

LAFM:  What is your message to the Dutchtown team and fans this year?

Expect us to keep improving each week. Don’t worry about where we start, but where we finish.

I would thank my Mom and Dad for supporting me with everything I do.

LAFM:  After losing to Walker in Week One, the team bounced back in a big way in Week Two defeating Central 27-0. What does the team need to do to keep the momentum going against a really tough opponent against Covington?

We need to be energized and focused at practice. Covington plays very hard so bringing our max effort and energy will be key.

I consider myself the smartest quarterback in the state. Academics are a priority to me and it shows in my standardized test scores as well as my GPA.