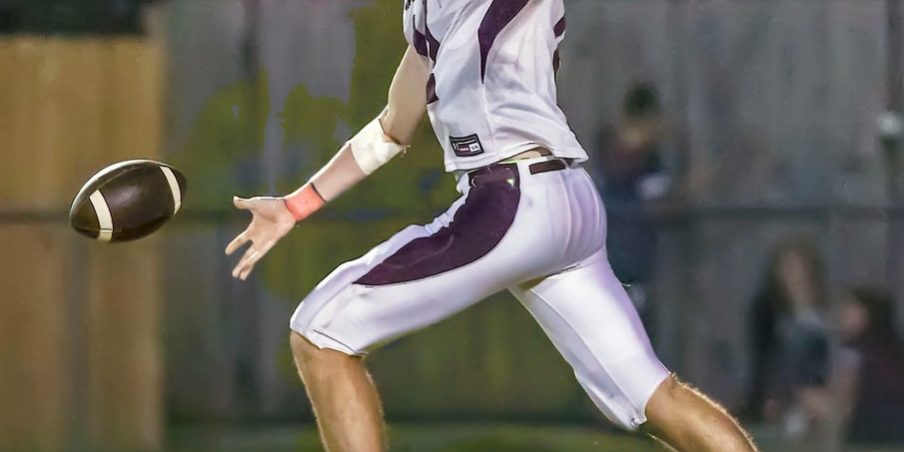 The St. Thomas Aquinas Falcons has one of the most versatile players on their team. Since being their starting punter in 2015 as a sophomore, William Hetzinger can effortlessly perform from being the kicker to play as a defensive end or as a wide receiver. His 6’4, 220 build is one of the factors helping him perform at any level Coach John White and Coach Hutch Gonzalez puts him in. Hetzinger’s performance as a punter averaging 46 yards per punt, earned him All-State in 2016. Having the ability to hit 50+ yard punts from the line of scrimmage has him recognized as a DI leg this year. Not only is Hetzinger the football captain, he is also the captain for three other STA sports: basketball, soccer and track. So far this season, Hetzinger has completed five sacks, one interception, three fumble recoveries, three receiving touchdowns and six punts downed inside the five. Louisiana Football Magazine expert Lee Brecheen believes that Hetzinger can become a big time punter.

“I think Will Hetzinger has the upside to be great in college,” Brecheen said. “Tall punters with strong legs usually pan out in college and he will be another one.”

Off the field, he maintains a 4.0 GPA with a 31 ACT embodying the term student-athlete. Hetzinger’s ability to excel athletically and educationally has been recognized by Army West Point program where he has recently committed as a punter for the 2018 season. In today’s recruit spotlight, we caught up with the Army commit as he talked about his high school career, his strengths as a punter, and so much more!

LAFM: What have been your most memorable accomplishments while at St Thomas Aquinas?

Making it to the semi finals my sophomore year and making first team All-State my junior year.

I am actually on the varsity team in four other sports at my school besides football.

LAFM: Last year, the Falcons ended with a 3-7 season. What are your thoughts on how the season turned out as well as what improvements were made this year for a 7-5 overall record?

A lot of people had St. Thomas projected to finish 2-8 this year, so I couldn’t be more proud of the success that our team enjoyed. During the off-season, we realized that our passing game was our greatest threat, so Coach Hutch implemented a new spread offense that worked incredibly. On the defensive side, a new scheme, the addition of three hardworking freshman on the defensive line, and an impressive year from our secondary were the difference between last year and this year. Key players such as Devon Wilson ‘20, Kade Bleakley ‘18, and Adam Hetzinger ‘19 stepped up and had huge seasons.

Devonta Lee from Amite was the best player that I have played against. Due to a few injuries, I got moved from defensive End to cornerback to try and limit him. We also kept a safety over the top of him at all times. We managed to hold him to only one reception that game, but his quality as a player was evident as he managed to score rushing, create a turnover off of an interception, and limit our passing game as a defensive back.

LAFM: What are some things that you have picked up from Coach White that has helped you in your game today?

Coach White was extremely influential in my football career. He spent a great deal of time emphasizing the importance of effort to our team. He made me realize that games become easier to win when you take things play by play and go all out at each snap of the ball.

LAFM: Have you receive any college offers so far? If yes, from where?

I have committed to play for Army West Point.

I need to develop more consistency in my punting game in order to get playing time in college. Sometimes I’ll have a 60+ yarder, other times I’ll have a 40 yarder. I think that continuing to work out my legs over the summer and focusing on the technical aspects of punting will help me achieve the consistency that I’m looking for.

Marquette King (Oakland Raiders) is my favorite player and who I model my game after. He is effective in his craft, but he also manages to have fun even as a punter.

LAFM: What is your advice for next year’s Falcon football team?

Never give up. Look back on this past season and remember that we started with 50 players and finished with 26 players dressed out. We turned a 2-4 start into a 7-5 finish. Anything is possible.

I want to thank Coach Tommy Bolton for encouraging me to join the football team as a freshman and for teaching me how to punt. Also, I want to thank my parents who have gone out of their way to make sure that I have had as many opportunities as possible.