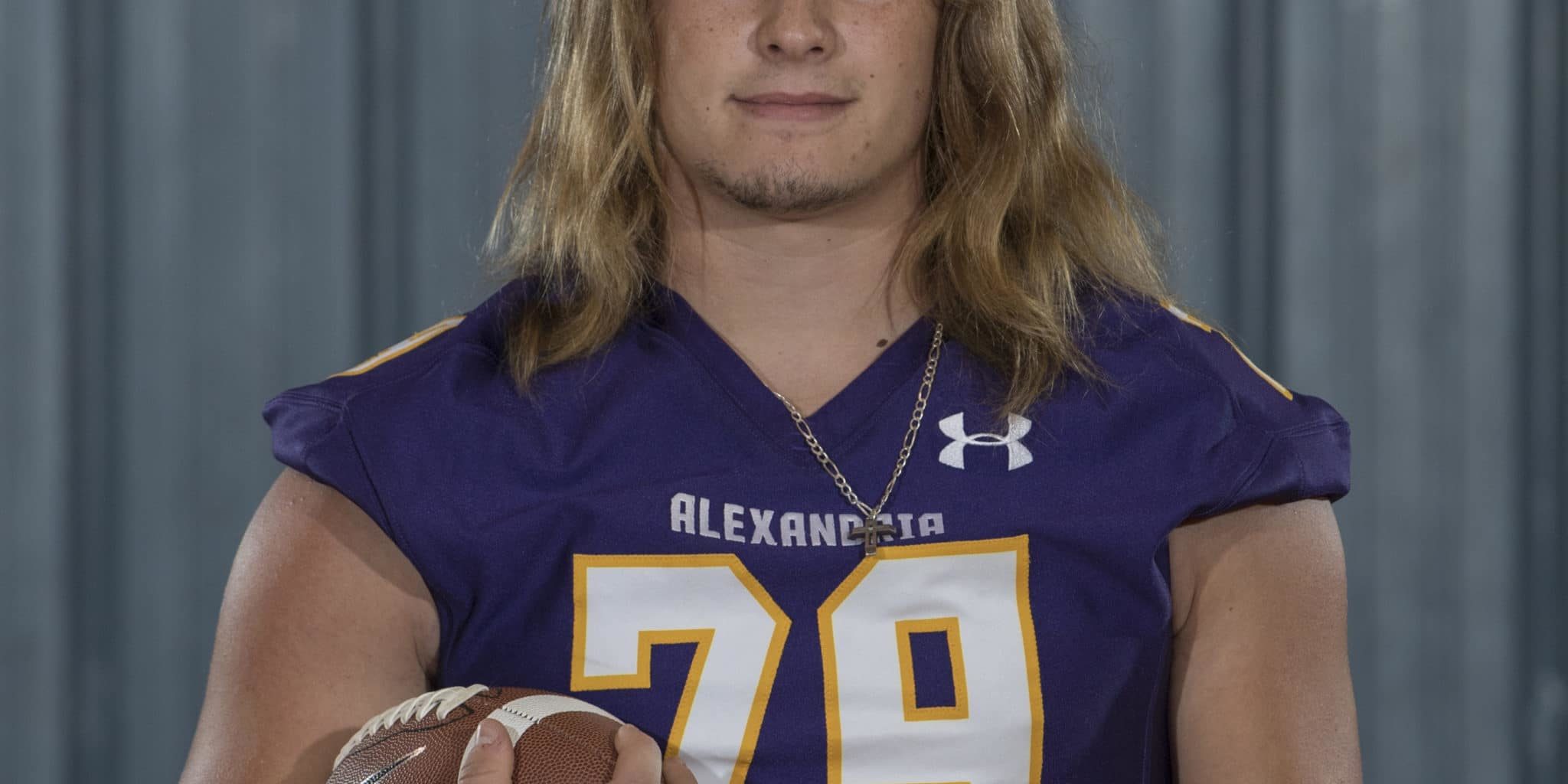 If you are a quarterback, Jared Byrd is the man you want and need as your left tackle. You can count on Jared Byrd to protect your blind side every single time. At 6’1 and 248 pounds, Jared Byrd is built to protect Trojans’ quarterback Ben Hesni. As a sophomore, Byrd was recognized as an All-District offensive lineman in 2015. The next year, as a junior, he was named 2nd team All-District. Byrd kicked off his season against Holy Savior Menard High School by intercepting a pass, running it back for a touchdown and snapping the ball for the extra point afterward. Louisiana Football Magazine’s recruit expert Lee Brecheen likes the potential of the senior two way player.

“Jared Byrd is one of four potential All-District linemen returning this season for the Trojans,” Brecheen said. “Jared is a young talented player that will be a key player on the Trojan defensive front.”

Over the summer, Northwestern State offered Jared Byrd a chance to play at the next level. Northwestern State recognized his potential after witnessing his brute strength and excellent ability to push the defensive lineman. However, he has not accepted their offer as he hopes to keep improving throughout the season and receive more offers.  The Trojans had a rough start but have restarted the season with two straight wins. The Alexandria football team has an away conference game at Natchitoches Central on Friday, October 6 at 7 P.M. In today’s recruit spotlight, we caught up with the senior Alexandria OT/DT as he talked about the start to the season, being offered by Northwestern State, his biggest accomplishments over his career, and so much more!

My physicality, strength, speed, having great techniques, and doing my assignments are my biggest strengths.

My favorite position to play on the field is outside linebacker controlling the line of scrimmage and making big plays, but I like offensive line the best because you are taking people’s will and just putting them in the dirt all night long.

LAFM: What were your most memorable accomplishments while at Alexandria High School?

My most memorable accomplishment playing for Alexandria Senior High was the interception against Menard when they threw a bubble and I followed block out there and made an interception for 78 yards.

I’m the third Byrd to play at ASH wearing the number 79 hoping to follow their footsteps playing at the next level as my Dad and Uncle did.

LAFM: The Trojans lost in the first round of playoffs against Acadiana by a score of 52-0. What are your thoughts on how the end of the season turned out as well as what improvements should be made for this year’s season?

It wasn’t how we were hoping it was going to end, but we used that game as a motivation for us because we know we don’t want that taste in our mouths again. We’re going grind so we don’t have to go through that again.

One of the best players I have gone against is from West Monroe not sure his number or name.

LAFM: What are some things that you have picked up from Coach Bachman that has helped you in your game today?

Being a leader as a player with your actions on how you do things. It has helped me become a leader and show the younger guys what’s right!

LAFM: What is your advice for next year’s Trojans football team?

My advice would be to keep grinding day in and day out. They have the best coaching staff in the state that gives their all every day. Don’t stop until ASH is on top.

I have an offer from Northwestern State University that I’m very thankful for.  There are others schools looking at me but haven’t pulled the trigger yet. At this point, I don’t have any clue where I will be attending.

I have to keep getting stronger day by day, keep gaining weight, but also keeping my speed up when gaining the weight.

JJ Watt (Wisconsin/Houston Texans) is a NFL player that I would like to model my game after because he is a very physical, nasty player and knows what it takes to be great on and off of the field .

I would like to thank my Mom and my Dad for everything they have done for me. They have always been involved in my sports in anything I wanted to do! I would just like to thank them for making me the man I am today and supporting me! Also, I would like to give a shout out to my Aunt Debbie, who has played a big roll in my life! Thank y’all! I love y’all!