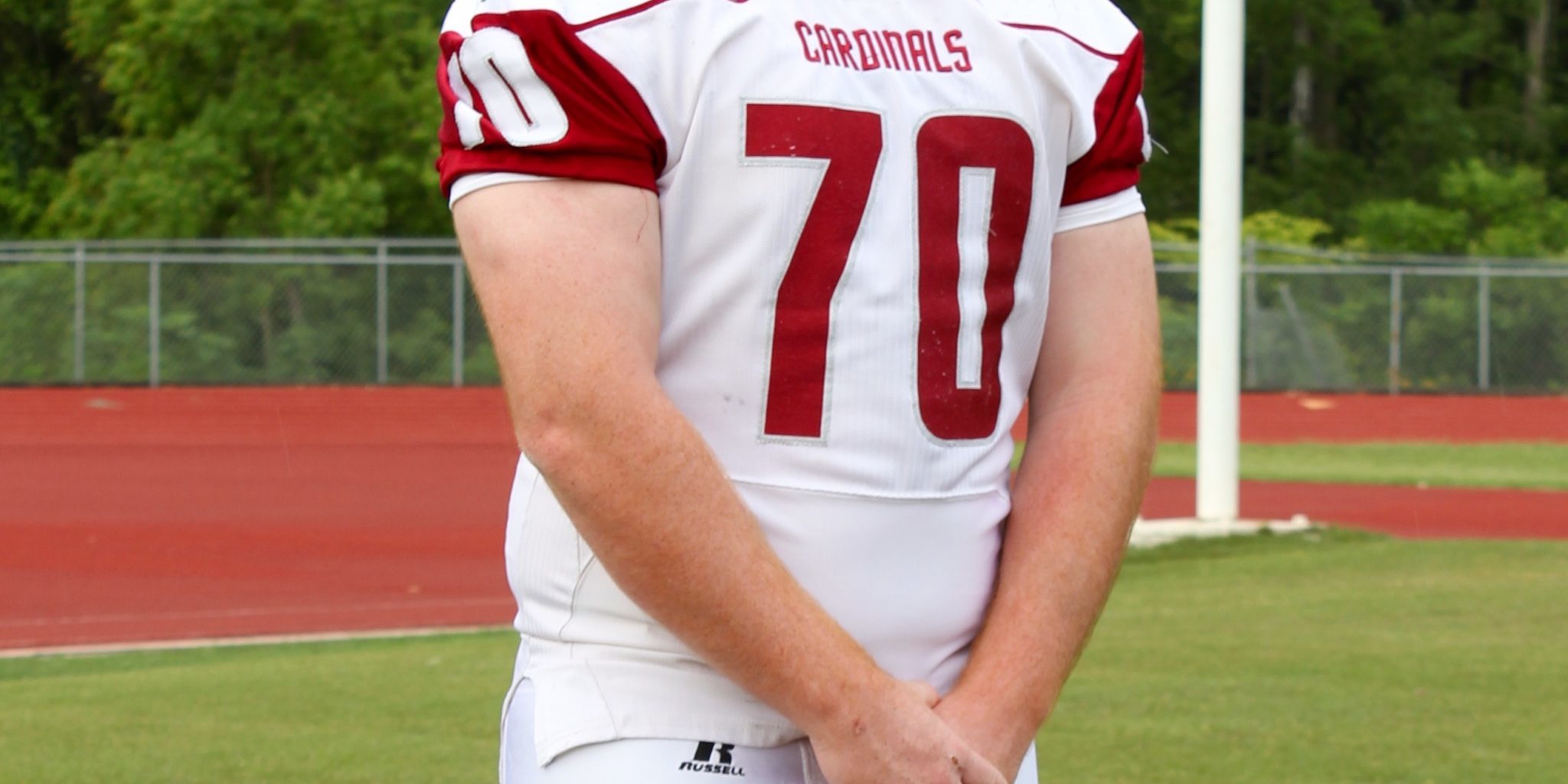 The E.D. White Cardinals have had a breakout season after only going 4-6 in the regular season a year ago and 4-8 overall. This season, the Cardinals head into the Division II bracket as the number six seed with a very impressive 9-1 record and to go along with a district championship. Not only did the Cardinals turn around a losing season a season ago and won the district championship, but they did it moving up a classification from 3A to 4A. The team’s formula of running the football and playing good defense has worked to almost perfection and a huge piece to that formula is E.D. White senior OT/DT Hudson Domangue. At 6-3, 300, Domangue doesn’t have just the size to dominate the line of scrimmage, but he also has the intensity and the nastiness to play the position as he gets that from playing on the defensive side of the football. Domangue does a great job of clearing the path for the team’s star running back Nikolas Shanklin. Domangue does a great job of finishing his blocks and continuing to play even when his man is on the ground. Louisiana Football Magazine’s recruit expert Lee Brecheen has high regards for the E.D. White senior as he was on the cover of our South Louisiana Magazine.

“Hudson Domangue is one of the best linemen in the Houma area,” Brecheen said. “It is tough to move him when he is on defense and he is a very aggressive blocker on offense.”

Domangue’s ability to control the line of scrimmage on both sides of the football has made the Cardinals a team to watch out for in the playoffs. As of right now, Domangue has one offer from Millsaps College, but he has already received interests from numerous schools. Hudson Domangue and the Cardinals will begin their march to the Superdome Friday at home against number 11 seed St. Louis Catholic Saints. In today’s recruit spotlight, we caught up with the E.D. White senior lineman as he talked about this week’s playoff matchup, being on the cover of our magazine, his top schools, and so much more!

LAFM: What are your accomplishments while at E.D. White?

Being selected All-District and having the opportunity to play Varsity in eighth grade.

LAFM: Have you received any offers from any schools to play at the next level? If not, are there any schools that have shown any interest in you?

I have one offer currently from Millsaps College, and I’m receiving interest from ULL, Southeastern, and Louisiana Tech.

The biggest strengths to my game are my run blocking, my attitude, and my toughness.

Something I want to improve on is my vision.

I base my game on Joe Thomas (Wisconsin/Cleveland Browns) from an attitude perspective, I never wanna miss a snap and I want to be there for my teammates.

My favorite game from my career was last year’s first round playoff game against Vandebilt. It was awesome to be able to beat our rivals in the playoffs after losing to them in the regular season.

LAFM: You play both on the offensive line and defensive line. Which position do you prefer playing and why?

I prefer the offensive line because it’s what I’ve played my whole life and I love playing next to the guys I’ve been friends with for years.

LAFM: Is there a team that you want to play in the playoffs the most?

I’m looking forward to every team we play in the playoffs. They’re gonna be tough matchups, but it will be fun.

LAFM: What do you like to do after football season?

After football season, I like to spend my time with friends and family. I also like to go hunting.

LAFM: What is an interesting fact that our readers don’t know about?

I’m right handed with everything besides shooting.

My favorite plays are any that involve blocking down or kicking out.

I would like to thank God, my family, all of my coaches, Speedy, and the PAP crew.

LAFM: You were on the cover of our magazine at the beginning of the season. What does it mean for you to be recognized as one of the best players in the state?

It’s truly a blessing to be recognized. It feels awesome to work so hard over the years and to know that it was worth it.

LAFM: The team is seeded #6 and will play St. Louis. Has the team watched any film on your opponent this week and if so, what stands out about them that will make it tough for the team to win this week?

They have very talented skills players and a tough defense.

LAFM: What were your goals heading into this season?

My goals are to do whatever it takes to put my team in the best position to win.

LAFM: The team will host a playoff game so what is your message to the ED White fans for this week’s game?

Thanks for all the support throughout this whole season. You guys made my senior year one to remember.