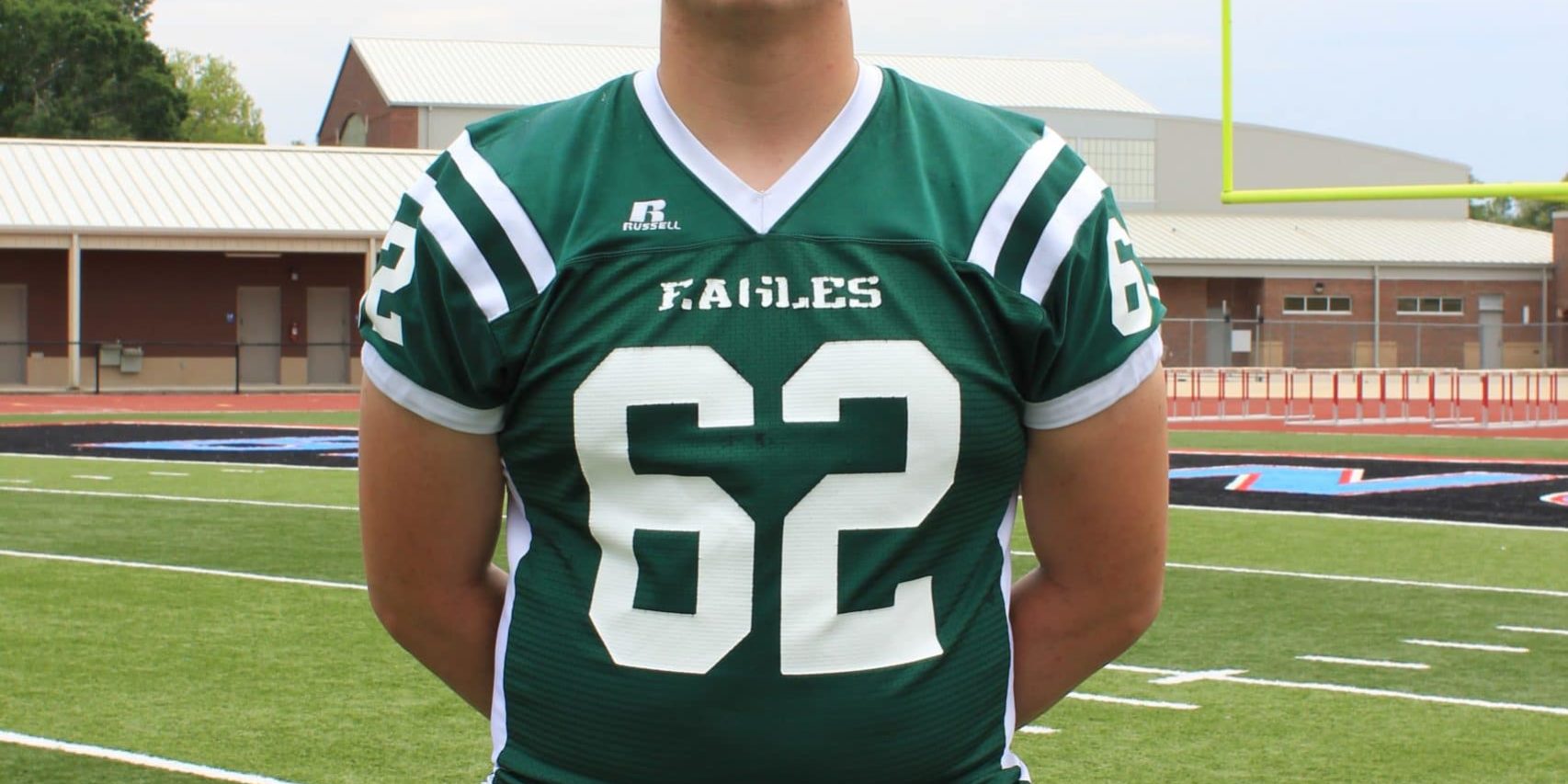 This past season, the Archbishop Shaw Eagles had a surprising disappointing season winning only one game, but keep in mind, that the Eagles play in a very tough New Orleans district that features 5A powerhouse programs such as Archbishop Rummel and John Curtis. Even though the Eagles had a losing season, it does not mean that they had mediocre football players. One of the best offensive linemen in the state is Archbishop Shaw OT Cameron Jackel, who has happened to be part of the team that has had a losing record in their past couple of seasons. Jackel is a physical specimen of an offensive lineman and is a prototypical offensive tackle. He is somebody that you want to invest in as someone who can protect a quarterback’s blind side. At 6’6, 300, Jackel has a great combination of having long arms and having quick feet, which helps him block some of the most dominant defensive ends in the state. With all the talent that is in District 9-5A, Jackel has been recognized as one of the best in his position making All-District in his junior and senior year as well as All-State in his last two seasons as well. Louisiana Football Magazine Editor/T.V. Host/Scout Lee Brecheen chose the talented offensive lineman from Shaw on our 1st All-Louisiana team in the pre-season. This is what he had to say about Cameron Jackel before the season started.

“Cameron Jackel definitely passes the eye test,” Brecheen said. “He moves well and what’s scary is that he is still putting everything together. At 6’6, 305, he will play offensive guard at a big school.”

Lee Brecheen definitely got the prediction right of Jackel playing at a big school. Cameron Jackel has signed to play football at the next level for Tulane along with another talented OT from the New Orleans area in Jesuit OT Corey Dublin. The pair of the talented offensive tackles will give Head Coach Willie Fritz a very underrated duo that can be the cornerstone for the Green Wave in the next couple of seasons. We caught up with the Tulane signee as he talked about playing at Archbishop Shaw, the reason why he signed with Tulane, and so much more in today’s recruit spotlight!

At 6’6, 300, Cameron Jackel has the size and athleticism to play offensive tackle at the next level. (Photo courtesy of Rommy Muhsen)

LAFM: What is your name, age, position, and high school you played for?

My name is Cameron Jackel. I am 18, and I played Left Tackle for Archbishop Shaw High School.

LAFM: What are your accomplishments while at Archbishop Shaw?

During my time at Shaw, I have been named All-District and All-Metro for my junior and senior seasons as well as All-State second team for both years.

Some of my strengths are that I have long arms so I can reach the defender before he can reach me, and I have good hands and footwork.

I have been working on my awareness during plays, and I would also like to be more agile so that I can pick up some of the tougher blocks.

LAFM: You have signed to play football for the Tulane Green Wave. You had a lot of other offers, but in the end, you have decided to stick with Tulane. What is it about the program that has helped make your decision to play there?

I always wanted to play at Tulane, and with Coach Fritz coming in, I think I’m getting in on the ground level of something that will go far.

LAFM: Another talented offensive lineman in the New Orleans area also signed with Tulane in Jesuit OT Corey Dublin. Have you two got in touch about playing at Tulane and being a part of a really good offensive line?

Corey and I haven’t reached out to each other about preparing to play together, but I know once we all get there, we will be able to work well as a unit.

LAFM: Last season was a rough season for the Eagles as the team went 1-10. Even though the team had a tough year, what were some of the positives of playing for the Eagles in your senior season?

The biggest positive from the season is that I was able to represent the school that I love and do it well. I’m also very positive about the future of our team since I was able to guide some of the younger lineman by giving game insight.

LAFM: You played in a very tough district. If you had to play one more game against any team, what team would it be and why?

If I had to choose one team to play against again, I think I’d choose our rival Archbishop Rummel. They have built a very successful program and playing against them gave me a small glimpse of what college football may be like.

I don’t remember specifically who was the toughest lineman I went up against, but it was definitely out of the guys in our district play from the Catholic League. They were the toughest because they are all in some of the biggest and most successful programs around.

LAFM: Who is the college or NFL offensive lineman that you like to model your game and why?

I never really looked to one specific lineman to emulate. Whenever I watch football, I like to focus in on the left tackle as much as possible.

My favorite plays as a lineman are pulls towards me because I love to downblock right into either the defensive tackle or the linebacker.

LAFM: Not only you were a great football player, but you were also a great student in the classroom. What is your advice to younger players on how to deal with school and football?

As long as you do what you have to do in class, do homework, and study, you will be successful despite tough schoolwork and packed schedules.

One thing about me that few know about is that I am really into superhero movies and comics.

LAFM: What is your intended major at Tulane?

After a lot of research, I have decided to study Applied Computing and Technology while I am at Tulane.

Two of my uncles played high school football at Archbishop Shaw, and one of my cousins played at South Alabama for college.

Of course, I want to thank the Lord for giving me my talent and size. Second of all, I want to thank my family for providing me the opportunity and supporting me through it all, and lastly, my coaches for developing me into who I am as a player.

LAFM: Why should Tulane fans be excited to have you on their football team?

Tulane fans should be excited about me because I love Tulane, and I will give everything I have to this program.