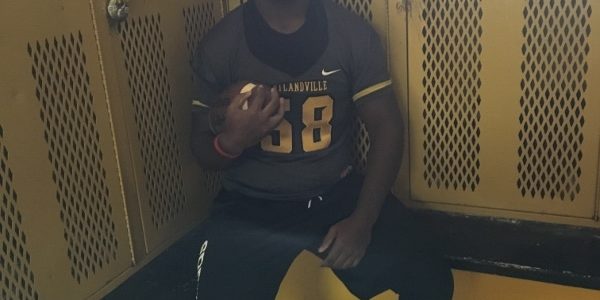 The Scotlandville Hornets had themselves their greatest season in the history of the program this past season. The Hornets made it all the way to the state championship game where they would eventually lose to the Evangel Christian Academy Eagles. Louisiana Football Magazine’s 5A Co-Offensive Player of the Year was Scotlandville senior QB and Louisiana Lafayette signee Levi Lewis, who had himself an excellent year, but even a great dynamic quarterback could achieve these honors and recognitions without stellar play from his offensive line. Scotlandville’s offensive line was one of the best in the entire state as the entire group did not give up a single sack until the state championship game in the Superdome. That is an amazing stat line, but it is not surprising when you add the combination of a great athlete at quarterback that can extend plays as well as a big offensive line that can hold their blocks for a long period of time. The combination of guys such as Richard Bates, Justin Weatherspoon, Raymond Pope, Deron Cery, and Roderick Thomas made this offensive line group one of the best in school history, but what set this group over the top was having a dominant tackle and leader like Brian Thomas. Thomas has consistently been one of the best offensive linemen in the state. This season, he has gone against some of the pass rushers off the edge and has only given up two sacks. He was a main reason why Levi Lewis felt so comfortable in the pocket because Thomas has the ability to shut down a great pass rusher. Louisiana Football Magazine Editor/Scout/T.V. Host Lee Brecheen saw how dominant Brian Thomas can be in person when he shut down a great pass rusher who is now with the LSU Tigers.

“I scouted the Scotlandville-Denham Springs game during the 2015 season, and Brian Thomas did not give up anything to LSU signee Caleb Roddy,” Brecheen said. “Thomas dominates the competition in high school because he is very strong and is great with his feet.”

His ability to dominate defensive linemen was a huge reason why he was named on our 1st All-Louisiana team at the beginning of the season, and he did not disappoint in his senior season. Brian Thomas will take his talents to San Antonio, Texas where he has signed to play for the Roadrunners of UTSA (University of Texas San Antonio). We caught up with the UTSA signee as he talked about his Scotlandville career, leading the team to the state championship game, playing with his teammates, why he signed with UTSA, and so much more in today’s recruit spotlight!

LAFM: What are your stats and accomplishments while at Scotlandville?

I had 78 pancake blocks on offense. On defense, I had 12 tackles, three tackles for loss, and two sacks.

LAFM: You have signed with UTSA to play football. What has helped make your decision on playing for Frank Wilson and the Roadrunners?

I believe UTSA and Frank Wilson are building a great program. I am completely bought in, and UTSA just feels like home for me.

LAFM: You played with one of the best offensive lines in school history. Who are some of your offensive line teammates that you want to give a shout out to?

Yes, I would. My offensive line was outstanding this year. Not to knock down any of my linemen bros that graduated last year, and in year’s past, but this offensive line group will definitely be the best that has ever come through Scotlandville in a long time. It includes Richard Bates, Deron Carey, Raymond Pope, and Roderick Thomas. We definitely could not accomplish what we did this year without those guys.

LAFM: You blocked for one of the best quarterbacks in the state in Levi Lewis. How much easier was your job as an offensive tackle with Levi at quarterback?

Levi is not only the greatest quarterback in the world, but he is also a great person. He is an awesome teammate and a good friend. I loved blocking for him, and if I could do it for him during my whole football career, I would.

The biggest strengths, to my game, would be definitely be my ability to be able to meet linemen at the line of scrimmage with a punishing blow on pass protection and also being able to kick slide fast enough to meet speed rushers.

LAFM: What do you need to improve on when you get to college?

When I get to UTSA, I would like to improve on my footwork, having fast feet, flexible hips, and focus on being a great offensive tackle.

I model my game after Michael Oher (former Ole Miss, Baltimore Ravens, and Tennessee Titans OT currently with the Carolina Panthers) because he is an aggressive offensive tackle, and he has definitely earned everything he’s got thus far in his career, and I see myself being the same way.

LAFM: Scotlandville had arguably the best season in the program’s history going all the way to the state championship. Even though the result was not what the team wanted, what are your thoughts on this great season for the program?

Even though we came up short, I believe we still had a remarkable season. To see this program and how it has improved each and every year ,throughout the adversity of multiple coaching changes, is nothing less than outstanding. Coach Davis has done a great job as head coach with this team, and I only see this program raising the bar in the future.

LAFM: You had blocked a lot of great defensive linemen over your career. Who was the toughest one that you had to block and why?

This was a hard question because I destroyed pretty much everyone this year, but I would say one of my worst games was against St. Augustine. Their defensive end Gary Mackey definitely got the better of me a few times during that game.

I love to play basketball, video games, baseball, and train in the off-season.

I’m really social. Most people think because I am a lineman and the way that I play with so much anger that I am an angry person, but I am not.

LAFM: What is your favorite game while at Scotlandville and why?

My favorite Scotlandville game, from this season, had to be against Zachary in week 5. I mean rivalry games don’t get too much better than Zachary vs. Scotlandville, and we lost the last three games vs. them, but they were all down to the wire games and to come out on top of this one in my senior season is nothing less than spectacular.

First, I would like to thank God. I also want to thank the people who love and support me, which is my family, my friends, and Coach Davis.

LAFM: You were named to our All-Louisiana team before the season started. What does it mean for you to be recognized as one of the best at your position?

This was really a big honor. I pray that I can continue to develop as a player so this won’t be the end of my accolades.

LAFM: What is your advice for next year’s Scotlandville team?

My advice, for the players next season, is to but into the system completely and work as hard as the people that came before you and were successful.

LAFM: What are you going to miss the most about Louisiana high school football?

What I’m going to miss most about playing high school football at Scotlandville is playing with my teammates. I have grown to love them so it will definitely be tough departing these guys.

LAFM: Why should UTSA fans be excited to have you on their football team?

UTSA fans should be excited because I’m looking to be the most punishing tackle in our division next year, and that’s not a threat to defensive tackles and ends. It’s a promise!