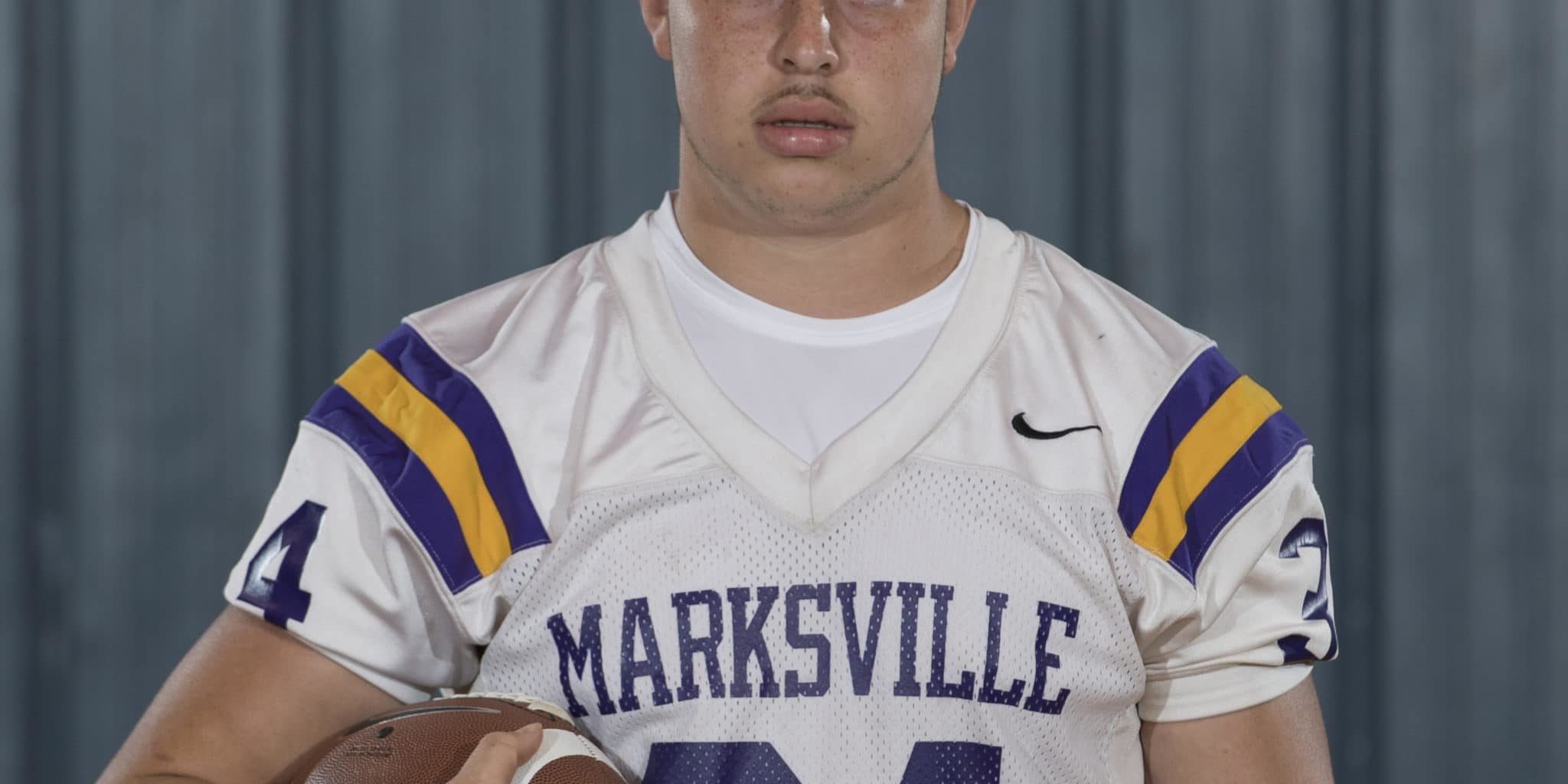 When football fans look at last year’s LSWA 3A All-State team, they may find some very familiar names in recruiting such as DeVonta Smith (Amite/Alabama), Travis Etienne (Jennings/Clemson), Jontre Kirklin (Lutcher/LSU), and many others, but there will be a name that people that live outside of the Cenla region have not heard about and that is Marksville senior OLB/DE Shawn Williams. Williams may not be the tallest guy at 6-0, 235 pounds, but he has a very high motor on the defensive side of the football. It is really hard to block him as he plays on the defensive line even though the linebacker position can be a position that he will mostly play at next season. Every play, Williams is going to give it his all and pursue the football. It showed not only on the football field, but statistically as well with 113 tackles and six sacks. He even had almost 20 tackles in a playoff game against Lutcher last season. Williams was a huge reason for the success the Tigers had last season on the defensive side of the football with QB Qway Mingo (Southern) making plays on offense. Louisiana Football Magazine’s recruit expert Lee Brecheen sees a big time sleeper that could end up playing on the middle of the defense when it is all said and done.

“I really like Shawn Williams,” Brecheen said. “He plays defensive end for his team, but if he played at a bigger school like Neville or West Monroe, he would play linebacker for them.. He is mean, fast, bulked up, and would make a great middle linebacker one day.”

Being versatile surely helps anybody to continue improving their game and that is definitely the case with Williams as he plays not only defensive end, but outside linebacker, and occasionally at running back on the offensive side of the football. As of right now, the Tigers are not enjoying as much early success as last year’s team with a current 3-4 record due to replacing their star QB Qway Mingo, but having a versatile player like Williams will help the team late on in the season in order to continue another long playoff run. As of right now, Williams has had no offers, but has communicated with other schools that have shown interest in his skill set. In today’s recruit spotlight, we caught up with the Marksville senior tackling machine as he talked about his great season last year, his top schools that he wants to play for, and so much more!

LAFM: Have any schools given you any offers or have you been in contact with any schools?

I have talked to a few schools like ULL and Southern, but I have not had any offers from schools.

LAFM: Is there a particular school that you would like to play for at the next level?

I would say Southern because one of my teammates LaQaaron (Qway) Mingo is at Southern right now and is a guy that I really look up to. Also, a lot of my family played at Southern as well.

I would say the way that I play hard and give effort is my biggest strength.

LAFM: What are some areas to your game that you need to improve on when you get to college?

I would say that I am going to be more focused on practice and get in my books a little bit more in school when I get to college.

LAFM: What do you want to go into when your football career comes to an end?

I want to go into criminal justice.

LAFM: I believe you play multiple positions over your career? What position do you enjoy playing the most?

I would say defensive end because you are on the line and on every play, you are going to be physical. I just like to hit so that would be my favorite position.

LAFM: Last season, the team won over 11 games and made the third round of the playoffs almost defeating the eventual 3A state champions in Lutcher. What are your thoughts on last season?

We worked hard and played hard every day. There was no slacking off and we just competed. I just love that team and I expect this year’s team to do the same thing, but we are going to move on as a team.

LAFM: You had an impressive year making All State and racking up over 100 tackles. What were your exact stats last season and how you were able to put up all those great numbers?

I think I had over 120 tackles and six sacks, but I couldn’t accomplish all that without the help of my team.

I definitely watch Ray Lewis’ (Miami/Baltimore Ravens) speeches all the time, which helps me be motivated for a game.

LAFM: Over your high school career, is there a high school game that sticks out to you the most?

I would say the Lutcher game because we came out and competed really hard and were right there with them last year.

Well, I run track, go back to working, and staying in my books because it is not all about football.

LAFM: This year, the team is 3-4. What are your thoughts on the start of the season and what does the team need to improve on the most?

We just got to go out there, give it our all in practice, and focus.

I would like to thank my Dad, my older brothers, and my Mom. I do it all for them.

LAFM: What is your message that you want to give to your team as well as the Marksville fans for the rest of the season?

I just want to tell the team and the fans that I am giving it my all on every play.

LAFM: What do you feel makes you stand out the most as a football player from all the other players at your position in the state?

I just feel that I am going to practice, hit, and play harder than anybody else