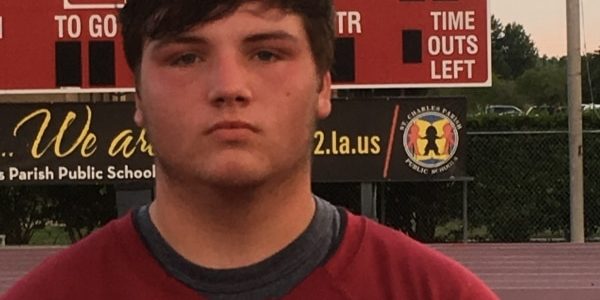 A couple of weeks ago, we profiled one of the best offensive linemen in the state in Destrehan senior OG Elijah Hayes, who will be playing football at Southeastern Louisiana University. However, he was not the only talented Destrehan senior offensive lineman that will be playing at the next level. Destrehan senior OT Dakota Torbert was another big time player that the Wildcats leaned on last season. At 6’6, 310, Torbert has the size, strength, and athleticism to play at the next level. He was part of a great offensive line which included Hayes, Chase Guilmino, and Samson Matthews. Along with Hayes, Torbert was the captain and anchor of this offensive line as he was a three year starter for the Wildcats. He helped the team reach the state championship game when he was a sophomore. With a lot of playing time and experience under his belt, the coaches had a lot of confidence in running plays either his way or Elijah Hayes’ way. Torbert not only did a great job in run blocking, but he also did a great job in pass protection. He gave senior QB Kohen Granier plenty of time to throw the football and find open receivers. The Wildcats relied on their offensive line and it paid dividends as the Wildcats had a chance to make it back to the Superdome this season, but it did not happen as the eventual 5A state champion Landry Walker Chargin’ Bucs went on to win that semi-final playoff game to advance to the state championship. It was not the ending that Dakota Torbert or any of his teammates wanted, but he should not hang his head. The Wildcats had a special season in which a lot of teams would dream of having. Dakota Torbert was a huge piece of the Wildcats’ success as both a leader and as a quality football player. On National Signing Day, the big and athletic senior offensive lineman signed to play football for Louisiana Monroe where he will help the Warhawks on the offensive line for the next couple of seasons. In today’s recruit spotlight, we caught up with the Louisiana Monroe signee as he talked about his high school career, the reason he signed with ULM, and so much more!

LAFM: What are your accomplishments while at Destrehan?

I was a three year starter at Destrehan. I made 1st Team All-District, USA Today 1st Team All-State, and was also a state champion runner-up.

LAFM: You have signed with Louisiana Monroe to play at the next level. What has helped you make the decision to play for the Warhawks?

ULM is a great place. It has great coaches and a great atmosphere. I will have a chance to play early and the brotherhood there is great.

LAFM: You played with a really good offensive line. Do you want to give these guys a shout out?

My center Chase was a great snapper and never missed up. The left guard will be my brother for life as well as Chase. The right guard Elijah Hayes signed with Southeastern and the right tackle was a junior and his upside is out the ceiling.

LAFM: The team was on their way to a state championship and an undefeated season until the team lost to the eventual state champion Landry Walker Chargin’ Bucs. What are your thoughts on how the end of the season turned out as well as the season as a whole?

I wouldn’t want to play with any other group of guys. We didn’t get a chance to accomplish our main goal, but the season was one to remember.

My biggest strength to my game is my footwork.

LAFM: What do you need to improve on when you get to Southeastern?

I need to improve on getting my body in shape as well as conditioning.

I model my game after La’el Collins (former Redemptorist and LSU offensive lineman currently with the Dallas Cowboys).

LAFM: Looking back at your career,  what is the game that sticks out the most in your career?

The game that sticks out to my memory was definitely the Mandeville game in the playoffs. It was one to remember.

I would say that the defensive end from Mandeville was the toughest defensive lineman to go up against because his technique was sound, and he was a strong kid.

I like to workout and hang out with friends.

Nothing much. I’m just an outgoing kid.

Pulling or blocking down is the best part about playing on the offensive line.

I want to thank Coach Emery and all of the football coaches. They pushed me to play football and made me reach my full potential.

LAFM: What does it mean for you to play at a great football program like Destrehan?

It means a lot. It’s the best program along with the best coaches in the state. No doubt!

LAFM: What is your advice for next year’s Destrehan team?

I’m going to miss just playing under the lights in Wildcat Stadium and hearing the fans scream. There’s no feeling like it.

LAFM: Why should Warhawk fans be excited to have you on their football team?

I’m going to work hard and bring excitement to the team. I am always ready to contribute.