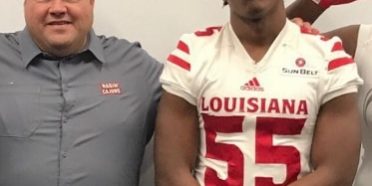 This year was an up and down season for the Alexandria Senior High Trojans as the team returned a lot of starters from the year before, but it was indeed a big step for the football program. The Trojans finished with a winning record for the second year in a row going 6-5 and losing in the first round of the playoffs to one of the best 5A football powerhouses in the state in Acadiana. One of the reasons why the Trojans had another successful season was the play of Carlos Rubio. Carlos Rubio was the senior offensive captain for the Trojans and really showed why he was such a key player. Alexandria Senior High had a winning season, but it could have been better as there were many injuries suffered by some key players. However, Rubio was the anchor of the offense that was very successful averaging over 30 points and almost 400 yards per game. Rubio is a very lean and athletic offensive lineman at 6’5, 250. Rubio’s athleticism has not only helped him in football, but it has also helped him in other sports such as Track & Field, Powerlifting, and basketball. His athletic ability helped him at Alexandria when he was just getting accustomed to the game of football as a freshman. It did not take long for the athletic offensive tackle to get adjusted to the game. Over his four years playing for the Trojans, Rubio has accomplished many things including making 1st Team All-Cenla, 1st Team All-District, and 5A All-State Honorable Mention. The scary part is that Rubio is only going to get better as an offensive lineman. The University of Louisiana-Lafayette, along with other in state schools such as Louisiana Monroe and Northwestern State, have shown interest in the senior Alexandria offensive lineman, but in the end, he decided to play for the Ragin’ Cajuns. In today’s recruit spotlight, we caught up with the Louisiana Lafayette signee as he talked about his high school career, the reason he decided to play for the Ragin’ Cajuns, and so much more!

LAFM: What are your accomplishments while at Alexandria?

LAFM: You have signed a letter of intent with the University of Louisiana-Lafayette. What made you decide the Ragin’ Cajuns over the other in state colleges?

My parents strongly supported me throughout the process, but my teammates and my coaches were the real push for me to go to ULL. It wasn’t too close, but at the same time, it wasn’t too far away from home. I also love the atmosphere of the school.

My biggest strength would have to be my pass protection. It just sets me apart from others because I’m long and fast. Most defensive linemen aren’t used to that.

One of the things ,that I have to work on, will be my leverage and staying low.

LAFM: Let’s talk about last season. The team went 6-5 for the second year in a row and then losing in the 1st round of the playoffs to Acadiana. What are your thoughts on the season as a whole?

It wasn’t a good season at all. We had a lot of places to improve on including myself. I wasn’t perfect, but I’m not going to make any excuses even though we also had over 20 injuries.

I model my game after Cam Robinson (former West Monroe and Alabama offensive lineman who is currently a NFL draft prospect). I watched him in high school because he went to West Monroe. It was a joy to watch him play, and I also watched him while he was at Alabama. He just reminds me so much of myself by the way he plays.

I like to participate in track, eat, chilling with friends, and lifting weights.

LAFM: What was your favorite memory playing for Alexandria?

My favorite memory would be against Ouachita Parish High School on senior night. Our team was filled with injuries and we just got Jorien Vallien back. We were down by two, and our quarterback Ben Hesni threw a post to Jorien. He broke loose and got tackled at the one. We called a timeout and Coach Bachman called a play. Another receiver Connor Griggs goes to the back corner of the end zone and catches the game winning touchdown with seven seconds left. The sideline exploded as we took down the number two team in the district at the time.

My advice is to stay focus, work hard, and keep your mind on the championship.

LAFM: Who was the toughest player that you went up against and why?

Isiaiah Buggs (former Ruston defensive end who is currently with Alabama) was the toughest player that I went up against. He is now a five star recruit that just enrolled at Alabama. I played against him in my sophomore year when he was a senior.

LAFM: If you had to play one more game, who would it be against and why?

It would be Tioga High School. That team, without a doubt, had a great season, but if we had to play them ten more times, we would win ten times. We had two players tear their ACLs in that game, and we just weren’t hitting our numbers. It puts a little salt on the wounds because it’s a big rivalry and we haven’t lost to them since I’ve been there until this season.

LAFM: What are you going to miss about playing high school football and why?

I am going to miss my teammates without a doubt. I have built a special connection with those guys that cannot be broken.

LAFM: Why should ULL fans be excited to have you on their football team?

Who doesn’t like to watch pancakes every play? It’s a beautiful sight to watch a person physically man handle another, and that is exactly what I am going to do.

LAFM: What makes you special or unique as an offensive lineman?

My speed and agility separates me from everybody else because most offensive linemen don’t have that.