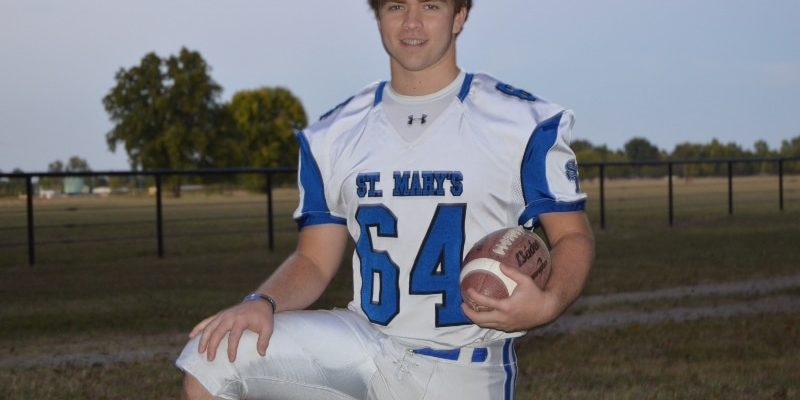 Usually, we cover big time football recruits or players that want to play at the next level. Sometimes, there are other players, who have had successful high school football careers and have gone to do many other successful things besides playing the game of football. One of those examples is St. Mary’s OG/DE Yancy LeGrande. LeGrande has had a successful playing career at St. Mary’s High School. He has done a lot of things that very athletic and highly recruited football players have never done such as playing in a state championship in the Super Dome. He also has racked up some awards and achievements over his career such as being an All-District player as a junior and a senior. He received those honors in a tough 1A district that also featured the defending 1A state champions in the Logansport Tigers. St. Mary Head Head Football Coach Corwyn Alredge admitted that Yancy LeGrande was probably their best offensive lineman and that includes Behrend Behrendsen, who was also another talented offensive lineman that played for the St. Mary Tigers. What is more impressive than LeGrande’s football ability is what he can do in the classroom. He was named Academic All-Composite Team as he maintained a perfect GPA score in his senior year. Unlike a lot of other high school football players that we profile on the website, Yancy LeGrande has decided to call it quits on his football career. He has quit the sport of football, but he has started a new journey for himself. That journey is the world of law and politics. After he graduates from St. Mary’s, the senior Tiger offensive lineman wants to become a public servant in politics. Even though he is not pursuing a football career, it is pretty encouraging that a lot of guys have their eyes on something that they care about and want to pursue a career in. Our very own Alex Martin caught up with the St. Mary’s senior offensive lineman as he talked about his high school football career, his favorite game, his advice for next year’s St.Mary team, and so much more in today’s recruit spotlight!

LAFM: What are your stats and accomplishments while at St. Mary’s?

I received All -District honors both years playing for St. Mary’s and received academic All-Composite team for having a 4.0 my senior year.

As an offensive lineman I was strengthened by my ability to move my feet quickly and react to changing defensive strategies.

I always needed to improve on my pulling power and the force I hit people with when I pulled.

LAFM: What college or NFL player do you model your game after?

I don’t have one specifically.

LAFM: What was your favorite game that you have played while at St. Mary’s?

My favorite game was beating Ascension Episcopal for the chance to play in the Dome.

LAFM: If you had to pick any Louisiana high school team to play against for one more game, what team would it be and why?

I would want to play St. Freds again for the chance to continue our post season career my senior year.

Currently am hoping to receive my degree in Engineering with a minor in political science in hope to go to law school.

I don’t have any preface rituals as I’m not a very superstitious person.

LAFM: Are there any other sports that you play when football season is over?

I am currently participating in field events for our track program.

LAFM: Is there anybody in your family that has played high school, college, or even NFL?

Most my family has played high school football and a few of my uncles played college level football.

I want to thank my father for coaching all throughout my career both on and off the field and my recent head coaches Lee Doty and Corwyn Aldredge.

LAFM: What is your message to next year’s St. Mary’s team?

To give it all you got regardless of what people think you can accomplish. Never take anything for granted and appreciate the time you have in high school before it’s all gone.

I hope to have a long career in law and possibly representing some of you one day as a public servant in politics.