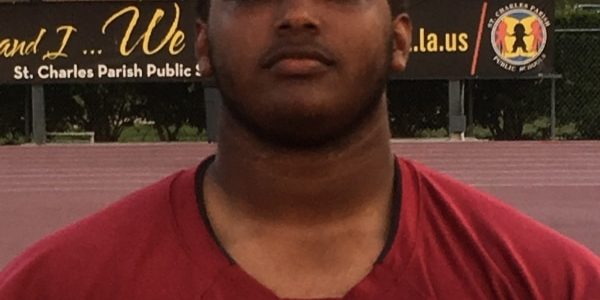 A lot of major DI colleges are looking for the prototypical offensive lineman that are over 6’3 and and over 320 lbs. There are a lot of great offensive linemen that meet those qualifications and go onto having great careers at the next level, but there are plenty of other offensive linemen that do not meet those requirements but can go on to have just as good of a football career. At 6’2, 315, Destrehan senior OG Elijah Hayes is one of those offensive linemen that did not get sought after by major DI schools, but at the same time, got some attention from mid major schools because of his ability as an offensive lineman. Hayes was the best offensive lineman on a team that was one of the best in the state last season. The Destrehan Wildcats are used to contending for championships, and that is what exactly the team did last season. The Wildcats were off to one of their best seasons with a 12-0 record, but the run would end in the Class 5A semifinals to eventual state champion Landry Walker Chargin’ Bucs. Hayes was a big part in why the offense had the run that they had. Hayes is a powerful and quick offensive lineman, which makes it hard for opposing defensive linemen to make any penetration against the athletic senior offensive lineman. Guys like Elijah Hayes, who are strong, quick, and athletic, should get more recognition for what they do on the football field. Without the great play of Hayes and his offensive line teammates, the Wildcats may have not had the success that they had this season. At the beginning of the season, Louisiana Football Magazine Editor/T.V. Host/Scout Lee Brecheen saw the potential that Elijah Hayes has when he named him to our 1st All-Louisiana team.

“Elijah Hayes is one of the most athletic offensive linemen in the state,” Brecheen said. “20 years ago, Elijah would’ve made All-American, but since he is undersized at 6’2, which is a little hard to believe. He doesn’t get the recognition that he should get. Whoever gets Elijah will get a steal because he is tough, mean, and will go on to a great college career.”

That is good news for Southeastern Louisiana as Elijah Hayes will takes his talents to Hammond for the next couple of years. We caught up with the Southeastern signee as he talked about his high school career, the reason why he signed with the Lions, the player he models his game after, the sport he plays after football season, and so much more in today’s recruit spotlight!

LAFM: What are your accomplishments while at Destrehan?

LAFM: You have signed with Southeastern Louisiana University. What has helped you make the decision to play for the Lions?

What has made me excited to play for Southeastern was the way they definitely know how to win football games, and I feel like that’s the best place for me to better myself as an offensive lineman and as a young man.

I just want to give a shout out to all my brothers on the line. MUDCAT PRIDE!!!

LAFM: The team was on their way to a state championship and an undefeated season until the team lost to the eventual state champion Landry Walker Chargin’ Bucs. What are your thoughts on how the end of the season turned out as well as the season as a whole?

My senior season was very fun and full of hard work. I wish we would’ve won state, but I have no regrets about my season.

My biggest strength to my game is how powerful I am and also my speed off the line.

LAFM: What do you need to improve on when you get to Southeastern?

I need to improve on my stamina before I arrive to Southeastern because I can’t go there out of shape. I need to get straight to work without hesitation.

Destrehan senior OG Elijah Hayes speaks with the media after signing with the Lions. (Photo provided by Elijah Hayes)

I model my game after Isaiah Edwards, who is at Rice, because he drives people off the line and just punishes them.

LAFM: Looking back at your career,  what is the game that sticks out the most in your career?

The game that sticks out to me the most was the playoff game against Mandeville because it didn’t look so good for us at first, but we pulled through with the clutch game winning two points.

During spring of my junior year, going against my teammate Glen Logan (current LSU defensive tackle). He made me better because he was very quick with his moves so my reaction time to D-line moves became much faster.

After the season, I just like to chill and relax from what I did during the season so I can give my body a break.

An interesting fact, about me that nobody really knows about, is that I play rugby for a club that’s nationally ranked.

My favorite play, as an offensive lineman, were plays that I can pull because I would catch a defensive lineman not paying attention, and I would just run him over.

LAFM: You were named to our All-Louisiana team before the season started. What does it mean for you to be recognized as one in your position in a state that is full of great offensive linemen?

It means a lot because I know that I’m an undersized offensive lineman, and my hard work was recognized amongst other people in the state.

LAFM: What is your advice for next year’s Destrehan team?

My advice, for next year’s team, is to keep on working hard, and don’t let adversity stop you.

I’m going to miss the big rivalry game between us and Hahnville because that’s the biggest game during the regular season.

LAFM: Why should Southeastern fans be excited to have you on their football team?

They should be excited because all I want to do is win. I know how to win, and I work really hard for what I want.