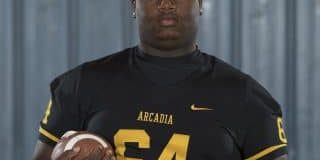 At the 1A level, Arcadia High School has been one of the most consistent football programs in the state since 2015. Under Head Coach Dimitri Carr‘s tenure, the Hornets have indeed showed their sting with a couple of ten win seasons, a semifinal appearance in the 2015 Class 1A playoffs, and a quarterfinal appearance in the 2016 Class 1A playoffs. One of the main reasons for the Hornets turnaround after notching five combined wins the three prior seasons to the breakout 2015 season has been the size and play of both the offensive and defensive lines. One of the key pieces for the Arcadia Hornets’ success is senior offensive guard and defensive tackle Brandon Rallins. Rallins has been a mainstay on both lines of scrimmage for Carr’s squads. In Rallins’ senior year, he was hoping to lead the team to make the next step and that is reaching the state championship. However, the Hornets took a step back after back to back ten win seasons as the Hornets only reached half that total in 2017 winning five games and losing in the first round of the playoffs. It was a disappointing season, but the senior indicated that the team had a string of bad luck that played in the down year.

“Overall, I think we done the best for what we had,” Rallins said. “We had a great team just fell short in some areas.”

Even with the down year, the senior firmly believes that last season was a fluke for the Hornets and that the team will go back to their winning ways even without him in the lineup.

“The future for them is great because they have guys like Corey Russell and Jamal Hill to keep the team alive this coming season,” Rallins said.

Now, Rallins’ high school football career is done. Over his prep high school career, he was named All-District three times, on the LSWA Class 1A 2nd Team All-State team his junior year, and made the Class 1A First Team All-State team this past season. Whether it was rushing the passer or drawing double teams, the two way Arcadia starter finished his career with 76 tackles and eight sacks. Even though Rallins was acknowledged for his defense, Louisiana Football Magazine’s recruiting expert Lee Brecheen sees the All-State defensive lineman as someone that can make an impact on the offensive side of the football.

“Brandon Rallins is one of the state’s best two way linemen,” Brecheen said. “Rallins is someone for his size that can run really well. He has the DI look and has so much upside as an offensive guard at the next level.”

As flattering as the comments were by Brecheen, Rallins wants to continue to make an impact on the defensive side of the football.

“I love playing on the defensive side of the football because I love to hit,” Rallins said. “I actually model my game after J.J. Watt (Wisconsin/Houston Texans) because he plays on the defensive line.”

Rallins’ has the size and strength to dominate in the interior, but for him, it is his football knowledge and preparation that really sets him apart.

“Being able to call a play and to know our opponent is my biggest strength,” Rallins said. “We watch film to go over the strategies and that’s where my strength comes in. Knowing when to play hard ball and our opponents weakness.”

At 6-4, 325 with power and a 5.6/40 time, Rallins is pretty hard to go against whether his opponent is on offense or defense, he has also played against some of the top talent not only in Louisiana, but in the entire country as well.

Rallins has size, strength, versatility, and has great grades with a 24 ACT and a 3.1 GPA, but yet, he has received a single offer. However, he has been interested and contacted by other schools.

“Yes, I had some colleges looking at me and they got pulled for some reason,” Rallins said. “One I know is the coach signed with another team and currently I am looking at ULM. They came to me at the last minute as a walk-on. I wanted to stay in state, but that lessens my chance of getting an offer also.”

There has certainly been ups and downs for the recruiting process for the Arcadia product but he believes that he has settled on a decision.

“After all the ups and downs, my decision ended at ULM,” Rallins said. “Coach Mike Collins and Coach John Carr came to me as a walk-on, but they stayed in touch with me throughout the entire time. My heart has always been set on LSU. Along the way, I fell short to make my dream come true. God has a plan for me and hopefully one day I can open my eyes to see the route I had plan was not God planning.”

Through everything that has been transpired, Rallins cannot be even more thankful for the many people in his life that have tried their hardest to put him in the best position as possible.

“I want to thank God, my family, and principal for helping me anyway they can,” he said.

Even though Rallins may accept the walk-on offer with ULM, he is still open for any more options.

“I am beginning to explore my college options and as I journey this task, I would love to expand the university sport of football,” Rallins said. “I believe I have the ability to play with any college and contribute to its future success. I just need to have someone trust in me to make it come true.”

If the right college comes in and takes a chance on Brandon Rallins, they will find out to not regret it.