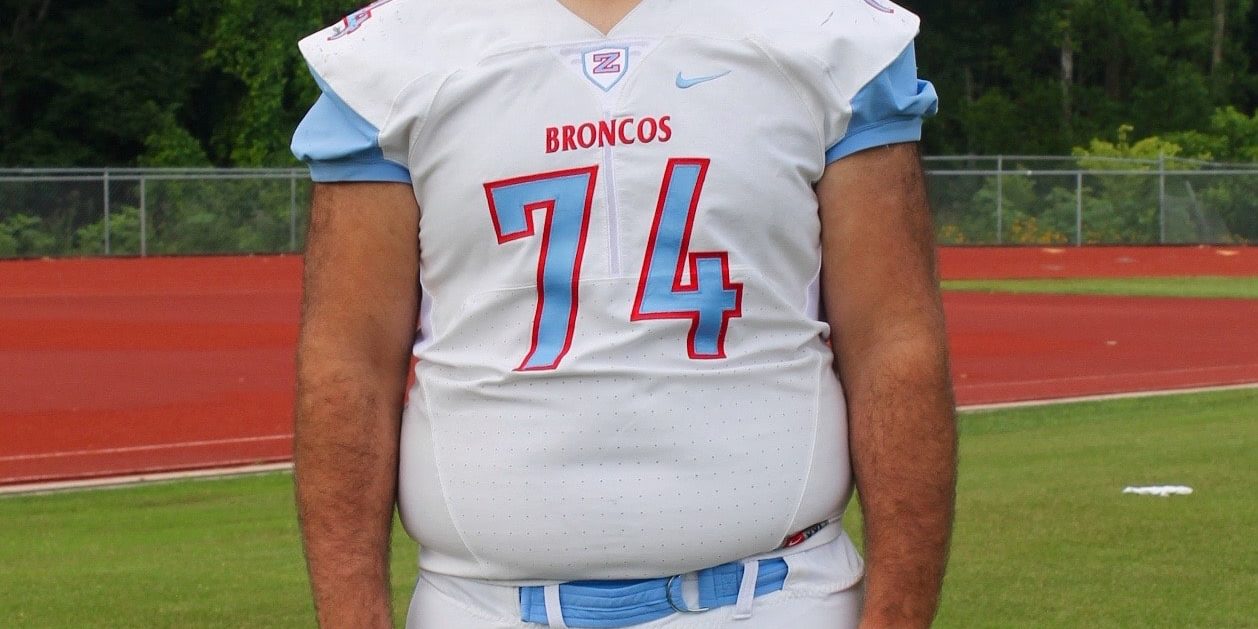 The Zachary High Broncos have been one of the best football programs in the entire state under Head Coach David Brewerton. The Broncos have had a lot of great skill talent featuring guys like Lindsey Scott (LSU/East Mississippi Community College) and other big time guys on the defensive side of the football, but a former offensive lineman like Coach Brewerton knows that games are won on the line of scrimmage. Brewerton still has that offensive line mentality when he coaches the game and when his players share that same mentality, then, you have something special. One of those senior leaders on the offensive line for the Broncos is senior OG Blake Anderson. Anderson has been there every year since Brewerton’s tenure and it has been a great relationship. Anderson is one of the best players for this year’s senior class, and this is a class that is one of the most successful in program history with a state championship and two semifinal appearances. Anderson is a four year starter during that time period and has played a major role for the Broncos. As a player, Anderson is a very tough player that will play through difficult situations and will give it everything that he has. At 6-3, 284, Anderson has the size, toughness, quickness, and athleticism to become a DI player. Louisiana Football Magazine’s recruit expert Lee Brecheen sees a lot in the senior Zachary offensive guard’s game as he was on the cover of our South Louisiana Magazine.

“The Zachary offensive line is led by Blake Anderson,” Brecheen said. “He is a big guy that has a lot of quickness and toughness. Some lucky college will definitely get him in the end.”

As of right now, Blake Anderson has yet to receive an offer from a school even though he has received a lot of interests from some schools. For Anderson, it is only a matter of time before this longtime Zachary offensive lineman will get the recognition that he deserves. In today’s recruit spotlight, we caught up with Blake Anderson as he talked about his fantastic high school career, his message for colleges, his thoughts on Friday’s upcoming matchup against Live Oak, and so much more!

LAFM: What is your name, age, position, and school you play for and why?

LAFM: What is your max bench press, max squat,  and 40 yard time?

LAFM: Have you received any offers from some schools?

Currently, I have no offers right now. I had a few schools come in and contact me to say that they were interested. They are just waiting to receive some of my film from my senior season .

LAFM: What are some schools that you want to attend and play football for?

I would say one of my top schools is the University of Southern Mississippi. I was really impressed by the coaching staff and how welcoming they were.  I also just felt the bond that the team had with each other. It was an unreal experience and my favorite college visit so far.

LAFM: You were on the cover of our South Louisiana Magazine. What does it mean for you heading into your senior season to be recognized as one of the best players in the state?

It means a lot to me honestly because I played football since I was eight years old. It’s just been a dream that I always had and seeing my hard work pay off after all of these years is gratifying. My number one goal is to get a college scholarship and that will sure help me get there.

As far as my playing style goes, I have a very brute way that I play. I just go in with a different mindset and try to be physical no matter who is across from me.

I would say my mentality is the biggest strength to my game. It doesn’t really matter on who lines up in front of me. I am going to give it my all.

LAFM: What are some of the biggest accomplishments over your high school career?

In my freshman year, we made the semi-finals and I played against Acadiana on defense in that game. That really gave me some experience and made me get used to the flow of the game. It really helped me going into my sophomore year when we won state and was my biggest accomplishment. That was a dream come true and I always wanted to play at West Monroe and we got to do that too last year in the semifinals.

LAFM: Last year, everybody thought it was going to be a rebuilding year for Zachary, but the team was one step away from reaching the Super Dome. What was Coach Brewerton’s message to the team that season and how did the team manage to block the outside noise?

LAFM: Two years ago, you were apart of that great championship run at Zachary. What was it like to experience something that a lot of high school players don’t get to experience in their prep careers?

Playing in the Superdome itself was just crazy. To be on the field where a lot of great players have stepped on was an electric feeling. It felt like you were on a different world and like you were at Cloud 9. It was amazing and I actually played that game with the flu. When I wasn’t on the field, I was throwing up. I wasn’t going to let that take me out of the game and I just played through it.

LAFM: This season, the team is currently 2-1 with a loss against Catholic High. What do you like most about this team so far and what does the team need to do to get better?

What I like most of our team is the connection that we have. Going to all the off-season camps together and practicing together just brought this team closer and closer to each other. The biggest thing that I need to work on is to not let the outside factors affect us. No matter what happens, we are going to lineup and play Bronco football.

LAFM: You mentioned how close the team really is and the offensive line is actually one of the tighter groups on a team. Who are some of your offfensive lineman buddies that you want to give a shout out to?

I want to give a shout out to my buddy William Granville. He tore his MCL before the first game of the season and his senior season was taken away from him. I feel for him and the pain that he has to go through.

I love drawing and I just enjoy expressing myself through art.

Obviously, our main goal is to go to state, but I just want to be that guy when things aren’t going well and need to rely on.

LAFM: What is the toughest defensive line that you had to go up against so far in your career?

Honestly, I would say the best defensive line I faced against was West Monroe in last year’s semi-final game. They were big, physical, and they came out the gate really sharp. It was really nothing other than that, and it definitely was a fight to the finish.

LAFM: The team plays against a very well coached and discipline team in Live Oak. What are your thoughts on this week’s matchup against the Eagles?

They are very focused on beating us and we are their standard. If we can just go out and play our game, we should be okay. If Live Oak comes in and beats us, it would definitely make their season.

I would like to thank my mom and my dad honestly. At the end of the day, they have been there for me and always will be there for me. They pushed me when I had my doubts and when I didn’t really want to be pushed. I also want to thank my girlfriend because she keeps me on track.

It means a lot to me. I have gone to a Zachary school for most of my life. To come into a school and play varsity since I was a freshman was incredible. I was a freshman when Coach Brewerton got there and will be part of his first senior class that has been there the whole time playing for him. Graduating at Zachary High School is definitely a major accomplishment to achieve.