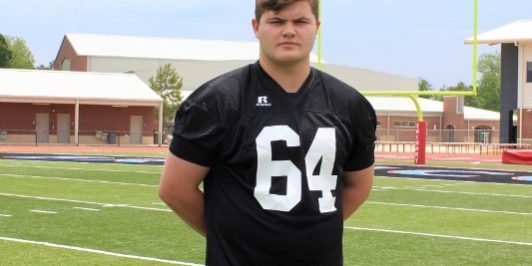 Oak Grove Center Joshua Mote has been one of the most underrated offensive linemen in the state with what he has been able to accomplish during his high school career at a small school. Oak Grove High School may not be a huge school, but the Tigers have been a football powerhouse for a long time. With multiple state championships, the Tigers have been one of the best 1A football programs in Louisiana High School football history. However, it has been a while since the Tigers have rekindled their magic of being championship contenders. It has been a while until this year when Oak Grove won over 10 games and came up short in the semi final game against Haynesville for a chance to go to the state championship. The main reason for the Tigers’ success could be the running game with Sam Philley running the ball this season, but it was the veteran center Joshua Mote that anchored the offensive line and led the successful offense for the Tigers. In his career, Mote has been named All-District every year of his high school career and All-State three times. Joshua Mote was even named to our 1st All-Louisiana team at the beginning of the season as well as the cover of our magazine. The biggest accomplishment for Mote may have been named team captain by his teammates. Oak Grove may not be the biggest school, but they are big in producing great teams and great players such as Joshua Mote. Louisiana Football Magazine Editor and T.V. Host Lee Brecheen had this to say about the veteran center from Oak Grove High School at the beginning of the football season.

“Joshua Mote was born to play center,” Brecheen said. “He is tough, mean, smart, and has good feet.  Joshua is originally from Mississippi and moved to Louisiana. He recently committed to Louisiana Tech and could play very fast because he is highly advanced at the position.”

Unlike other big time recruits, Joshua Mote has stayed true to his commitment and has signed with the Bulldogs on National Signing Day. It was a great pickup for Skip Holtz and the Bulldogs as they picked up a center that has all the tools to become a complete center. Our own Alex Martin caught up with the Louisiana Tech signee to talk about his great high school career, his senior season, signing with Louisiana Tech, and much more in today’s recruit spotlight!

LAFM: What is your name, age, and school you play for?

LAFM: What are your accomplishments at Oak Grove?

LAFM: You signed with Louisiana Tech. What is it about the school that attracted you to go play football there?

The tradition, success, academics, and the people surrounding the program are all reasons why I signed with Louisiana Tech.

My strengths are being physical every play, my quickness, and having good hips.

LAFM: What are some areas that you need to improve on at the next level?

The biggest thing, for me, is grasping concepts of the game and being able to use my hands with good placement.

LAFM: If you had to pick any Louisiana high school team to play against for one more game, what team would you pick and why?

I would play either Sterlington or Haynesville again. I respect them both.

LAFM: Who was the toughest defensive linemen you faced this year?

Oak Grove Center Joshua Mote (64) watches the result of the play from a distance. (Photo courtesy of 14-0 productions)

I played against some talent at DT. I would say probably #77 from Delhi Charter (Kendal Offord). He was a very smart player that knew what he was doing.

I want to model my game after Dallas Cowboys center Travis Fredricks. He is very physical, knows how to finish blocks, and has a quick first step off the ball. I also model my game after Alex Mack ,the center for the Atlanta Falcons, because of his toughness and ability to play while blocking out the pain.

I usually have a Bible verse that I pick out and focus on.

LAFM: What is your favorite go to pre-game meal?

We have chicken strips and mashed potatoes before every game.

I usually pick out an album that I’ll listen to throughout the day, and most of the time, it was a Hillsong Worship album.

My Dad and Uncle both played at Tech together, and then, my grandfather played college football. My uncle, Josh Bradley played for the Houston Oilers/Tennessee Titans in the 90’s.

I plan to major in Kinesiology.

I’ve been playing drums for seven years. I love playing music with friends.

LAFM: Is there anybody that you’d like to give a shout out to?

I want to say thank you to my Mom/Dad, family, coaches, and friends for everything they have done to help me become the person and player that I am today.