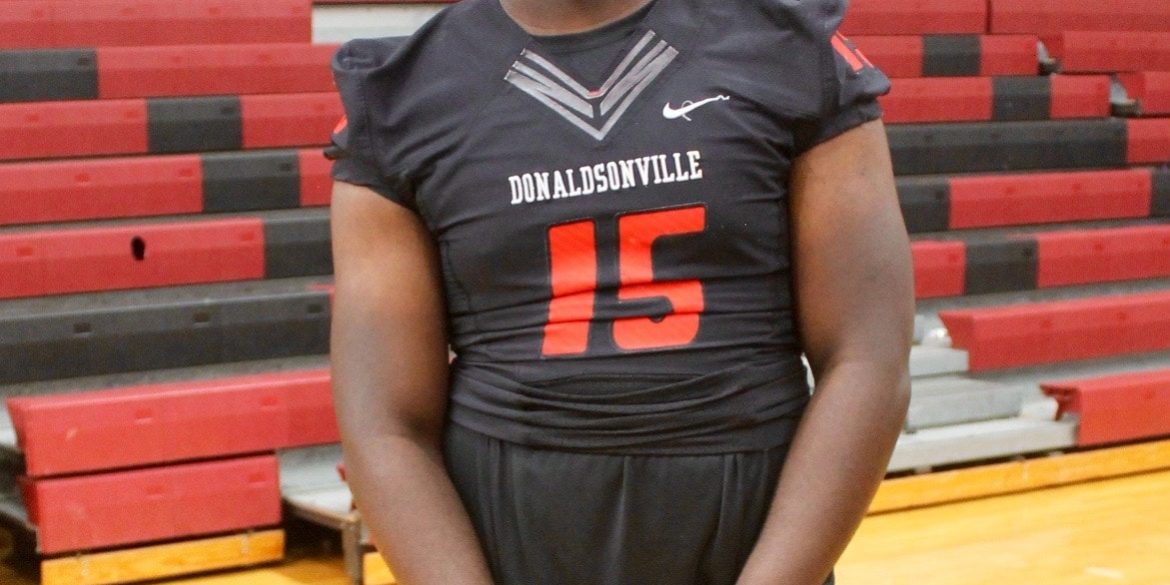 Donaldsonville senior DE/MLB Tahj Brown is one of the best and most underrated defensive players in the state. At 6-2, 255, Brown definitely looks the part of a big time DI player, and he backs it up with his play on the football field. Last year, Brown led the defense in tackles with over 120 total playing at the middle linebacker position and also had five sacks, two interceptions, two forced fumbles, and even a blocked field goals. This season, Brown leads a Donaldsonville defense that has much improved this season. With almost all of the key players returning a season ago, the Donaldsonville Tigers are on a big time run jumping out to a 5-0 start and having a current 6-2 record. The Tigers have already won more game already than all of last season. It has been a great season, but it has not been without a few adjustments. After dominating last season at linebacker, Brown has made the switch to defensive end. Brown has adjusted quite nicely and has really shown his versatility as a pass rusher and as a run stopper. His numbers may not fill up the stat sheet as offenses do try to double team him more and try to run away from him, but he is helping defense by giving other big time players like teammate and Tulane commit at DT Davon Wright chances to blow up plays. Louisiana Football Magazine’s recruit expert Lee Brecheen believes that Brown is a big time player so much so that he was on the cover of our South Louisiana magazine.

With his versatility to create havoc at either defensive end or linebacker to go along with his size and great athletic ability, it is not surprising to hear that Brown has had plenty of offers from schools and even made a commitment. The senior Donaldsonville star defender has committed to play for the Houston Cougars. If the commitment holds up, this could be a major pickup for the Cougars on the defensive side of the football. In today’s recruit spotlight, we caught up with the All-District DE/MLB as he talked about his commitment with the Cougars, the advice he has taken about recruiting from another former Donaldsonville star, the team’s success this season, the position he enjoys playing more, and so much more!

LAFM: You are committed to play for the Houston Cougars. What is it about the Cougars that has attracted you the most?

I just like how they are pursuing me and I believe it is a good fit for me. I love the relationship that I have with Coach Major Applewhite and the defensive line coach in Coach A.J. Blum.

LAFM: I know you are committed to Houston and focused on your senior season right now, but are you still open to any other colleges that are given you offers and college visits?

Yes. I am still open to any other colleges and will be taking visits, but as of now, I am committed to Houston.

I would say my versatility would be the biggest strength to my game because I can play both middle linebacker and defensive end.

LAFM: What do you need to improve on before you get to Houston or any other college?

I just need to improve on getting faster and stronger.

LAFM: You and Davon Wright are a great one-two punch on the front four. What is your relationship with Davon along with the rest of your defensive teammates?

Davon and I are really good buddies and we have been best of friends for a long time. As far as the defense goes, we just are clicking as a unit and getting better after each game.

LAFM: You play both linebacker and defensive end. Which position do you prefer out of the two or is there a preference for you?

I rather play defensive end because you get to lineup on the line and go up against an offensive lineman one on one and get to rush the quarterback.

LAFM: Who is a college or NFL defensive end that you like to watch to help you with your game?

I like to watch Cameron Jordan (Cal/New Orleans Saints) and Derek Barnett (Tennessee/Philadelphia Eagles) because of their versatility.

LAFM: One of your former teammates Stephen Sullivan is making an impact already at LSU. Did he give you any advice on how to approach the recruiting process or how to approach your senior season?

He really has shown me by not telling me, but showing me by example of how things should be done.

LAFM: This season, the Tigers are off to a fantastic start currently at 6-2. Were you surprised about how much of a great start the team has had?

I really wasn’t surprised. I feel that the team is more experienced and more mature this season. Everybody is back and we are ready for a run at the Superdome.

LAFM: Is there a particular high school game that pops into your mind over your high school career that you reflect on?

The St. James game definitely stands out. The atmosphere is incredible and there is always a great crowd. It is a big game.

LAFM: You were on the cover of our South Louisiana magazine at the beginning of the season. What does it mean for you to be recognized as one of the best players in the state of Louisiana?

It feels great to be recognized and it is great to know that all of my hard work is paying off.

LAFM: What are some other big accomplishments that you have had over your career?

I would just say getting a lot of offers from colleges would have to be my biggest accomplishment.

LAFM: What were your goals before the season started?

Last year, I had 120 tackles and so, this year, my goal was to get 200 tackles. However, I moved to defensive end and everybody ran the football away from me.

I like to just hang out with my family and friends.

I just want to thank all of the coaches and my family for just being there for me.

LAFM: As a senior leader on this football team, what is your message to the Donaldsonville team as well as the fans?

I would just say to stay put as we are making a run at the Superdome.

LAFM: Why should Houston fans be excited to have a player like you on their football team?

I would just say that they are getting themselves a hard worker and a savage.