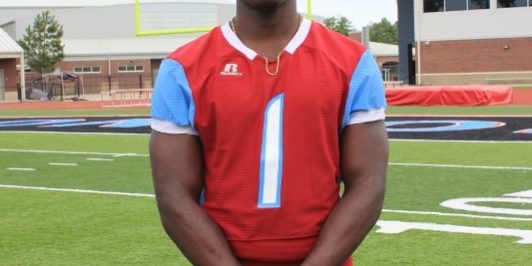 There was no question that Minden High School had plenty of optimism at the linebacker position last season. The trio was arguably the best in school history especially under longtime Minden Head Coach Spencer Heard. The trio included hard hitting MLB Cameron Morgan and a versatile playmaker in OLB Ventavious Williams, but arguably the best of the bunch was LB Zikerrion Baker. Over the last three seasons, it was Baker, who led the team in tackles. Baker is a monster on the defensive side of the football just like his teammate Cameron Morgan. Unlike Morgan, who is 240 pounds, Baker is a little smaller at 6’1, 215, but he hits just as hard. Baker has a great sense of where the football is at and does a really good job of pursuing the ball carrier. At linebacker, teams need guys that are fearless and Baker is one of those guys. Another key quality that Baker has is that he is versatile. He can line up at inside linebacker, outside linebacker, and even defensive end. He showed his tackling ability as well as his pass rushing skills last season when he had over 130 tackles and ten sacks. His productivity and leadership were big reasons why the Crimson Tide had such a great season last year. The team won 12 games and made the quarterfinals where they lost to 4A powerhouse Warren Easton. Even though Baker’s career didn’t end with a state championship, there was no question that he left everything that he had at Minden. For two years in a row, he was the All-Area Defensive MVP as well as being named All-District, All-Metro, and All-State. He also was a 4A Defensive Player of the Year Honorable Mention for his achievements this season. Even though Baker had the skills to go anywhere that he wanted to go, his only SEC offer came from Ole Miss. That offer led to Baker signing with the Rebels where he will continue to drive opposing offenses crazy. In today’s recruit spotlight, we caught up with the Ole Miss signee as he talked about his high school career, his teammates, the reason why he chose Ole Miss, what motivates him to play sports, and so much more!

Minden senior LB and Ole Miss signee Zikerrion Baker was a tackling machine leading the team in tackles for three straight seasons including this year when he had over 130 tackles his senior year. (Photo courtesy of Blow’s Photography)

LAFM: What are your stats and accomplishments while at Minden High School?

For two years in a row, I had All-Area Defensive MVP. I led the team in tackles for three years straight from my sophomore year to my senior year. I was also recognized All-District, All-Metro, and All-State during my career. This year, I finished with 133 tackles.

LAFM: You have signed with Ole Miss to continue your football career. What is it about the Rebels that has attracted your attention the most?

I really wanted to play in the SEC. Ole Miss was my only SEC offer. When I went down to visit, Coach Freeze and the coaches showed me around, and I had a really good time.

LAFM: What are some areas to your game that you need to work on the most when you get to Ole Miss?

I probably would have to work on my footwork.

I grew up watching Patrick Willis (former Ole Miss and San Francisco 49er LB) and Ray Lewis (former Miami Hurricane and Baltimore Ravens LB) because I kind of played like them as somebody who can watch the play and track it down.

LAFM: What was your best game while at Minden and why?

I would say my junior year when we played Benton because I got hurt in the game and I played the injury all the way through in a very close game.

LAFM: Last season, the Crimson Tide went 11-2 and had a quarterfinal finish in the 4A playoffs. Even though the season didn’t result in a state championship, what are your thoughts on the season as a whole?

LAFM: In speaking of Cameron, you, along with Cameron, were one of the top linebacking duos in the state last season. What is it like having a guy like Cameron on the defensive front to help you out?

It’s amazing because if something goes wrong and you miss something, you have guys like Cameron and Ventavious that can make the plays as well. Every game, we would compete for who had the most tackles in a game. It was amazing to play with those guys because they were great athletes too.

LAFM: What is your advice for next year’s Minden team?

My advice is to just work hard. These guys have a really good work ethic. I also want to tell them to listen to the coaches and stay humble.

LAFM: When you are not playing football, what do you like to do as a hobby?

I like to work out as well as working on cars. I love cars.

LAFM: What are you going to miss most about playing football at Minden?

Minden senior LB and Ole Miss signee Zikerrion Baker has the look of a DI player and has definitely shown it on the gridiron during his Crimson Tide career. (Photo courtesy of Blows Photography)

LAFM: If you had to go back and play one more game, who would it be against and why?

I would say Woodlawn (Shreveport) because it was one of the biggest rivalry games that we had this year. We kind of came out flat in the beginning and when we got going, it was too late to come back. That would be the game that I would go back to because one of my basketball buddies played at Woodlawn and he would never let me hear the end of it with them beating us this year.

I would say Devin White (former North Webster RB currently plays LB for LSU). He was a monster when I played against him a few years ago.

I would like to come back and open something up for the kids like a recreational center where they can play tournaments and other sports there. It will be something that I could give back to the community.

LAFM: Who are some people in your life that you want to thank for helping you be in the position that you are in today?

I like to thank my parents as well as my little cousin. My cousin passed away last year, and it kind of motivated me. We would play basketball, and he was big into basketball and got me to play. Every day, he would tell me that we are going to be famous and be professional players. Now, every day, that is all I think about and he helps me put all the effort that I can into it.

LAFM: Why should Ole Miss fans be excited to have you on their football team?

Istrouma’s Blue Chip Running Back Gearing Up For Next Fall
June 11, 2021

Montgomery High School Athlete J.T. Turner Keeps Himself Busy On And Off The Field
June 9, 2021