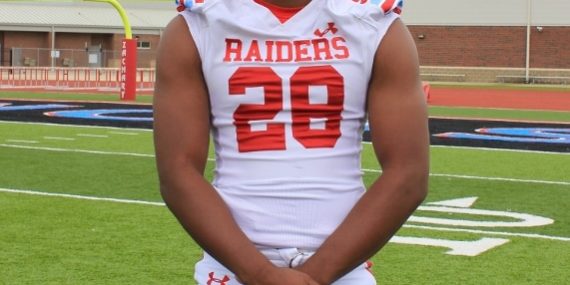 The Archbishop Rummel High School football program has been one of the most successful football programs in the entire state over the last couple of years. Since the 2012 season, the Rummel Raiders have won two state championships and have made two other state championship appearances. This year may have been a disappointment as the Raiders had a 7-4 season and lost in the 2nd round of the Division I playoffs to John Curtis. It comes to show you that a winning season and advancing far in the playoffs may be a disappointment for a program that has dominated in the past couple of years such as the Rummel Raiders. This season, it was the defense that helped carry the Raiders to a winning season in a tough district against great teams like John Curtis, St. Augustine, Jesuit, Brother Martin, etc. Defensive playmakers like DB/LB Derrick Munson and LB Shahid Reece really made a lot of plays during their time at Rummel High School and made arguably one of the top linebacking duos in the state. Rummel LB Shahid Reece had himself a great individual season statistically and proved to be a big time leader for the Raiders this season. Shahid Reece was definitely one of the best players for the Raiders coming into this season and he did not disappoint. Over his career, he finished with over 200 tackles, five interceptions, and 13 sacks. This is a player that had to transition from playing in the secondary to playing linebacker. Reece is a very versatile football player that can make plays against the pass as well as make great tackles in the running game. He is a big time hitter and is very underrated on his ability to tackle in open space. His experience playing in the secondary helps him now in his new role at linebacker. He is also capable of dominating an entire game like the game against Covington earlier this year when had double digit tackles, sacks, and forced turnovers. At the beginning of the season, the versatile defensive playmaker from Archbishop Rummel High School made our 1st All-Louisiana team. Louisiana Football Magazine Editor and T.V. Host Lee Brecheen had this to say about Shahid Reece before the season started.

“Shahid Reece is a former defensive back that grew to play linebacker but will get bigger at 225 to 230,” Brecheen said. ” He is the best hitting linebacker in the state and can run a 4.5/40.”

His speed, versatility, ball hawking, and tackling ability were all skills that attracted Ball State University. Reece signed with Ball State on National Signing Day, and the Cardinals have themselves a guy that can be a mainstay on that defense for a long time. In today’s recruit spotlight, we caught up with the future Ball State Cardinal as he talks about his Rummel career, the player he models his game after, signing with Ball State, and so much more!

Shahid Reece signed with the Ball State Cardinals on National Signing Day and could be a big part of the defense starting next season. (Photo courtesy of Matt Barlow and Ball State University)

LAFM: What are your stats and accomplishments while at Archbishop Rummel?

I finished my career with over 220 tackles, 5 interceptions, 13 sacks, and one TD. I was also named Team Captain and All-District in my senior year.

My strengths, to my game, are playing extremely hard with high effort as well as playing smart and extremely physical.

I can improve on my coverage skills.

LAFM: What college or NFL linebacker do you model your game after?

I am a huge Deion Jones (former Jesuit and LSU linebacker currently with the Atlanta Falcons). He just plays the game with so much energy, and I feel that he sets himself apart and makes him a special player. I model my game after him because we both hustle on every play.

LAFM: You have signed with Ball State on National Signing Day. What is it about the Cardinals that attracts you to play football there?

I fell in love with Ball State on my official visit. Coach Curtis and Coach Neu are great people that I can relate to because they are both from New Orleans. They make me feel comfortable and like I was apart of the Ball State family. The players were all so nice and that made it even more awesome.

LAFM: Heading into the season, Archbishop Rummel was one of the favorites to win the Division I state championship. The team had a good year, but not a dominating year like the last couple of seasons. How disappointing was the season to end the season without going to the state championship?

This past season had its ups and downs. Yes, it was extremely disappointing not to win as much as we usually do, but we finished with a 7-4 record. Some schools wish they can have that record, but it humbled me in ways that made me grind even harder.

LAFM: What was your favorite game that you have played while at Rummel?

My favorite game was the Covington game. I had 11 tackles, three sacks, an interception for a touchdown, and a forced fumble as well as a fumble recovery on the same play. I was named WWL player of the week!

My advice for the younger guys, as far as recruiting, is don’t pick a school because of the name or the conference. Pick the school that fits you and gives you the opportunity to get a college degree. That is something that no one can take from you. From my experience, the recruiting process is rough and stressful, but also extremely fun. My advice is to just take it all in.

LAFM: What does playing for a program like Archbishop Rummel that has had so much success in the past couple of years mean to you?

Playing for Rummel, by far, made me a better and smarter player. I was coached by the best. This is a serious program that you have no choice to be great!

LAFM: Your team had a really tough schedule this year. What team in your opinion was the best team that you have played this season?

The best team, that we played, was John Curtis. They beat us twice and are extremely discipline as well as being very physical. They are a well coached group.

LAFM: You were named to our 1st All-Louisiana team at the beginning of the season. What does it mean for you to be recognized as one of the best at your position?

I was honored to be on the All-Louisiana team, but I really try not to worry about that type of stuff. I just play ball and do whatever I need to do to make my team better.

LAFM: What are other sports that you play when the football season is over?

LAFM: What is your message to next year’s Rummel team?

My message to next year’s team is to stay hungry, never back down from a challenge, and don’t be afraid to be great!

I currently have a cousin who plays linebacker for the Tennessee Titans. His name is Aaron Wallace Jr.

I want to thank God, my parents, coaches, my family, and my teachers.

LAFM: What makes you unique from other linebackers in the state?

Other linebacker worry about stars, offers, and everything else, but actually playing football. They worry too much about the next guy. I only worry about how Shahid can be better than the Shahid he was yesterday. I compare myself to myself. That’s what sets me a part from a lot of linebackers out there.