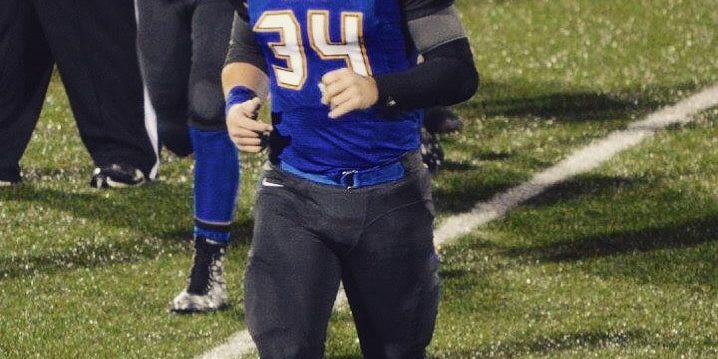 There are a lot of great two-sport athletes that can play at the next level in multiple sports. Live Oak senior LB Preston Faulkner is one of those players. In the Baton Rouge area, Faulkner was one of the area’s best linebackers, but that is not even his best sport. Preston Faulkner is also a very talented baseball player for the Eagles, but at the same time, is one of the biggest baseball recruits in the same. There is no doubt that Preston Faulkner is very talented, but it is very difficult to play two sports at the same time. The athletic two sport star had to eventually make up his mind of what sport he was going to choose to play in college, and he ultimately chose baseball.  He has even committed to play for Southeastern Louisiana University. Even though he will be trading his football uniform for a baseball uniform, there was no denying how talented of a football player he was for the Eagles. In his senior year, he helped the Eagles achieve a winning record and a playoff berth. At the end of the season, he was one of our 5A Defensive honorable mentions for the Defensive Player of the Year award given to the best players in each classification. Not only was he a great leader for the defense, but he also had some pretty good statistics racking up 126 tackles, 18 tackles for loss, and six sacks in his senior season. It was definitely a great individual season for the senior linebacker, but it could have been even better. In the first round of the playoffs, the Eagles faced off against the Central Wildcats. The Eagles defeated the Wildcats in dominating fashion with the score of 41-2. It looked like it could be the same type of result for Faulkner and the Eagles, but the Wildcats got their revenge defeating Live Oak 17-0. It is the end of Preston Faulkner’s football career, but it is surely the beginning of a very promising baseball career for this two sport athlete. In today’s recruit spotlight, we caught up with the Southeastern Louisiana baseball signee as he talked about his Live Oak football career, the reason why he chose baseball over football, and so much more!

LAFM: What were your biggest strengths as a football player?

My physicality and ability to read the play quickly were my biggest strengths as a football player.

LAFM: What were the biggest things that you worked on as a football player?

I always had to improve on my footwork.

LAFM: You have signed a baseball scholarship with Southeastern Louisiana University. You were a two sport stud, but what made you choose baseball over football in the end?

I believe that I have an extended future in baseball.

LAFM: If the Lions had an open football spot, would you be interested in playing or is your entire focus on baseball?

I am going to just focus on my baseball career.

LAFM: What are some things that you picked up playing baseball that helped you as a football player?

I had to deal with tons of pressure as a baseball player so in that aspect, it helped me as a football player. That helped me relax in tight situations.

LAFM: Who was the college or NFL linebacker that you modeled your game after?

Luke Kuechly (former Boston College and current Carolina Panthers linebacker) is the player that I modeled my game after.

LAFM: What do you like to do when you are not playing football or baseball?

I will be 17 my freshman year in college.

LAFM: Let’s talk about last season. The team finished at 6-5 and lost to Central in the first round after beating them in the week before in the final week of the regular season. How disappointing was it to lose that game after handling the same team the previous week?

It was very disappointing. We overlooked a good opponent. We had our focus on the 2nd round, which in football cannot happen.

LAFM: What is your favorite football memory while at Live Oak and why?

Just playing under the Friday night lights was my favorite memory. There is no better feeling than running out of the tunnel to the screaming crowd.

I want to give a shout out to Landon Roberts #15. He has been my best friend since I was six years old. We have been neighbors all my life so it’s like I have two families.

Never have any regrets. Always enjoy every second, There is a phrase saying that “It will be gone before you know it,”. That phrase is absolutely true.

LAFM: Is there anybody in your family that has played high school, college, or even professional sports?

My dad Asa Faulkner was a great two sport athlete at Ponchatoula and eventually signed a baseball scholarship to play at Louisiana College.

LAFM: What does it mean for you to attend school and play sports at Live Oak?

It means a lot. Neither of my parents went here so I tried setting a statement going somewhere else. Maybe one day, my kids can experience what I have gone through.

I want to thank my parents. My dad introduced me to baseball and football, which are two of the best things that I have ever done. The amount of time they have spent with me playing sports is a huge reason I am where I am today.

Like I said, Friday night lights and the amazing memories with your best friends are the best things about high school football. These are the moments that I will never forget for the rest of my life.