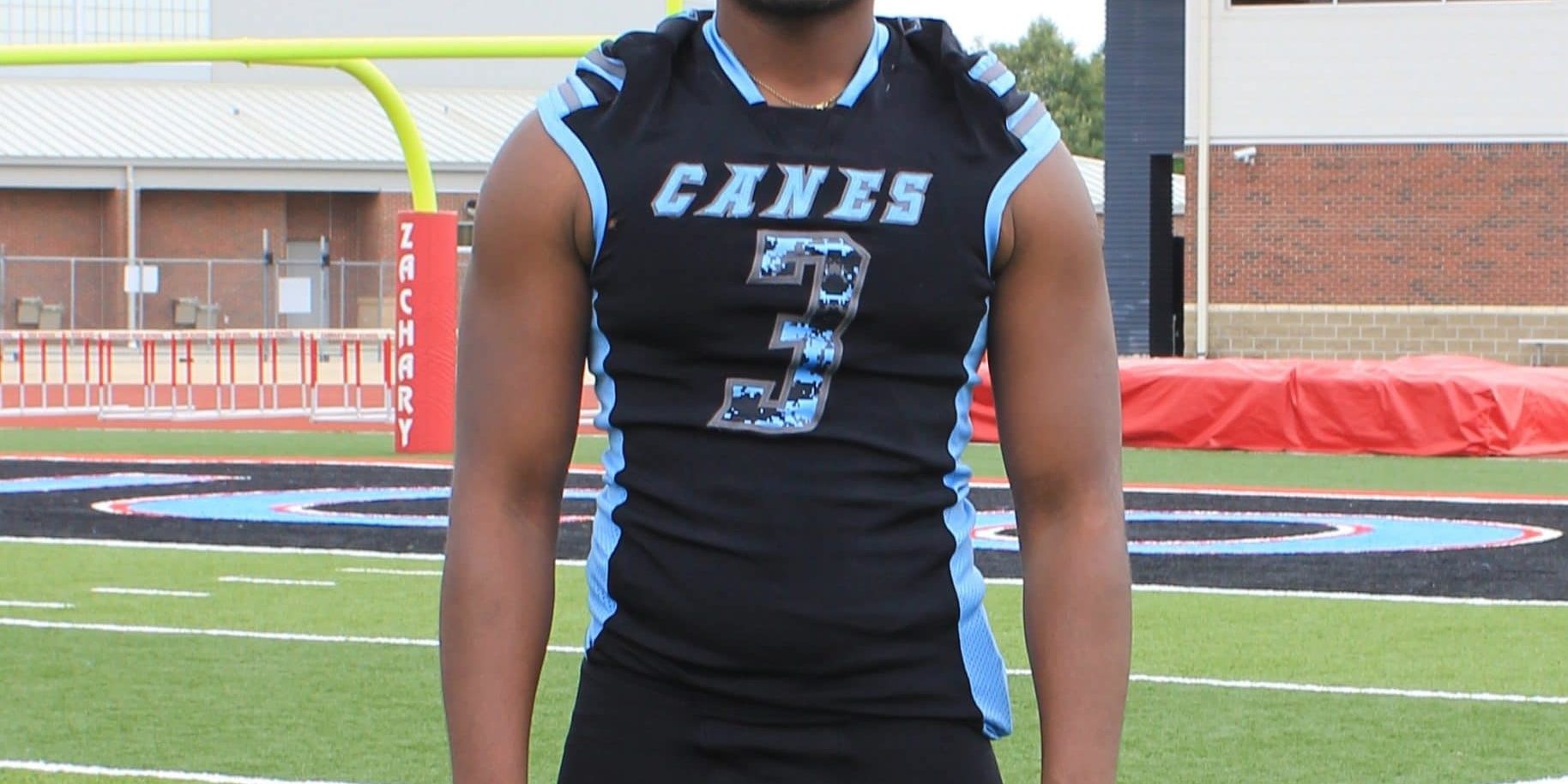 When people mention some of the best linebackers in the entire state from the 2017 class, few put Kendrick Smith‘s name in the conversation, but if you asked any South Plaquemines fan or any other coach or player that has seen Smith in action, they would put him in that category without any hesitation. For the Hurricanes, the senior athlete was indeed a natural disaster for opposing teams not only as a linebacker, but at any other position. Smith was the the team’s best player the last couple of years because he could have been used at any other position including running back, safety, and even quarterback. However, it was Smith’s primary position, at linebacker, that he made the most noise. In his senior year, he posted some ridiculous numbers including 107 tackles, three interceptions, six forced fumbles, over 20 tackles for loss, and eight sacks. Smith was a football player that was a man amongst boys. There are plenty of guys that look like they have the talent, but it comes down to how much a player really wants to be successful. Kendrick Smith has both of those qualities which makes him a very dangerous football player. At the beginning of the season, Smith was named to our 1st All-Louisiana team as a linebacker and finished the season as one of our leading candidates for our 2A Defensive Player of the Year. Louisiana Football Magazine Editor/T.V. Host/Scout Lee Brecheen believes that the South Plaquemines star is one of the best players at his position in the entire state.

“There is not a better outside linebacker in the state than Kendrick Smith,” Brecheen said. “Even though Kendrick plays outside linebacker, he can play any other position. Some lucky college will get Kendrick Smith and be very pleased when they get him. He is a lean 215 and will gain another 20 pounds. Kendrick plays everything for the team. If he played for a football powerhouse like Archbishop Rummel or West Monroe, he would be a big time national recruit.”

The lucky college, that would pick up Kendrick Smith, is Louisiana College. It was a great steal for the Wildcats as they receive a player who would thrive in their defense for the next four years. In today’s article, we caught up with the Louisiana College signee as he talked about his high school career, what he misses most about playing high school football, the reason why he chose the Wildcats, and so much more!

South Plaquemines senior LB Kendrick Smith was constantly on the field for the Hurricanes during his prep career. (Photo courtesy of the Smith family)

LAFM: What are your stats and accomplishments while at Ville Platte?

I was named All-District, All-State, All-Metro, All-State, and was the District Defensive MVP. In my senior year, I recorded 107 tackles, three interceptions, forced six fumbles, had 22 tackles for loss, and eight sacks.

LAFM: You have signed with Louisiana College to continue your football career. What is it about the Wildcats that has attracted you to play football there?

What attracted me the most about LC is that the program has a history of winning. Coach Charles and I made a great connection everytime we talked. He introduced me to the defense and I fit perfectly into the scheme that’s in place in that package.

My biggest strengths are that I have an outstanding nose for the football. Everywhere the ball goes, whether it be a pass or a run, I will be there. I am also really aggressive and won’t let anyone stop me from making a tackle. I study film hard enough to know what the opponent is doing before they even snap the ball.

LAFM: What are some areas to your game that you need to improve on when you get to Louisiana College?

One big improvement, that I need to improve on, is to play with more technique. I think that if I get my technique down, I will be an even better player.

One player, that I model in football, is Reuben Foster (former Alabama LB currently with the San Francisco 49ers). I model him because he plays the game ruthlessly while doing the right things to make a play. He’s always around the ball and just lays people out.

LAFM: What was your best game while at South Plaquemines and why?

My best game at SP was in my junior year playing against Abbeville. I rushed for over 100 yards and had over 10 tackles in that game.

LAFM: The team had a pretty good season going 8-4 and making it to the second round of the playoffs. What are your overall thoughts on the season overall?

The season was a great one to remember. We won our second straight district championship and only lost four games, which were all real nail biters. My teammates accomplished a lot this year, and I was really proud of it.

LAFM: What is your advice for this year’s South Plaquemines team especially with a new head coach coming in?

My advice for this year’s team is to give it everything you got and leave it all out on the field because you won’t get it back! No regrets!

I like to play my game, go outside, and workout.

LAFM: What are you going to miss most about playing football at South Plaquemines?

LAFM: If you had to go back and play one more game for South Plaquemines, what team would you pick to play against and why?

I would go back and play against Belle Chasse in my senior year because I knew in my heart that we were supposed to win that game, and we let it slip.

LAFM: You were selected to our All-Louisiana team at the beginning of the season. What does it mean for you to be recognized as one of the best players at your position in the state?

My dad played high school football as well as three of my older cousins. One of those cousins is playing at Arizona State right now.

LAFM: Who are some people in your life that has helped you be in the position that you are in today?

I want to give thanks to my Mom and Dad as well as Coach Figaro and everybody else that has helped me paint my picture.

LAFM: Why should Louisiana College fans be excited to have you on their team next fall?

LC fans should be very excited because I’m a player that plays the game with a lot of passion. I have fun while playing, and I’m going to help them win plenty of games as well as championships. They’re going to have a great time watching me play.