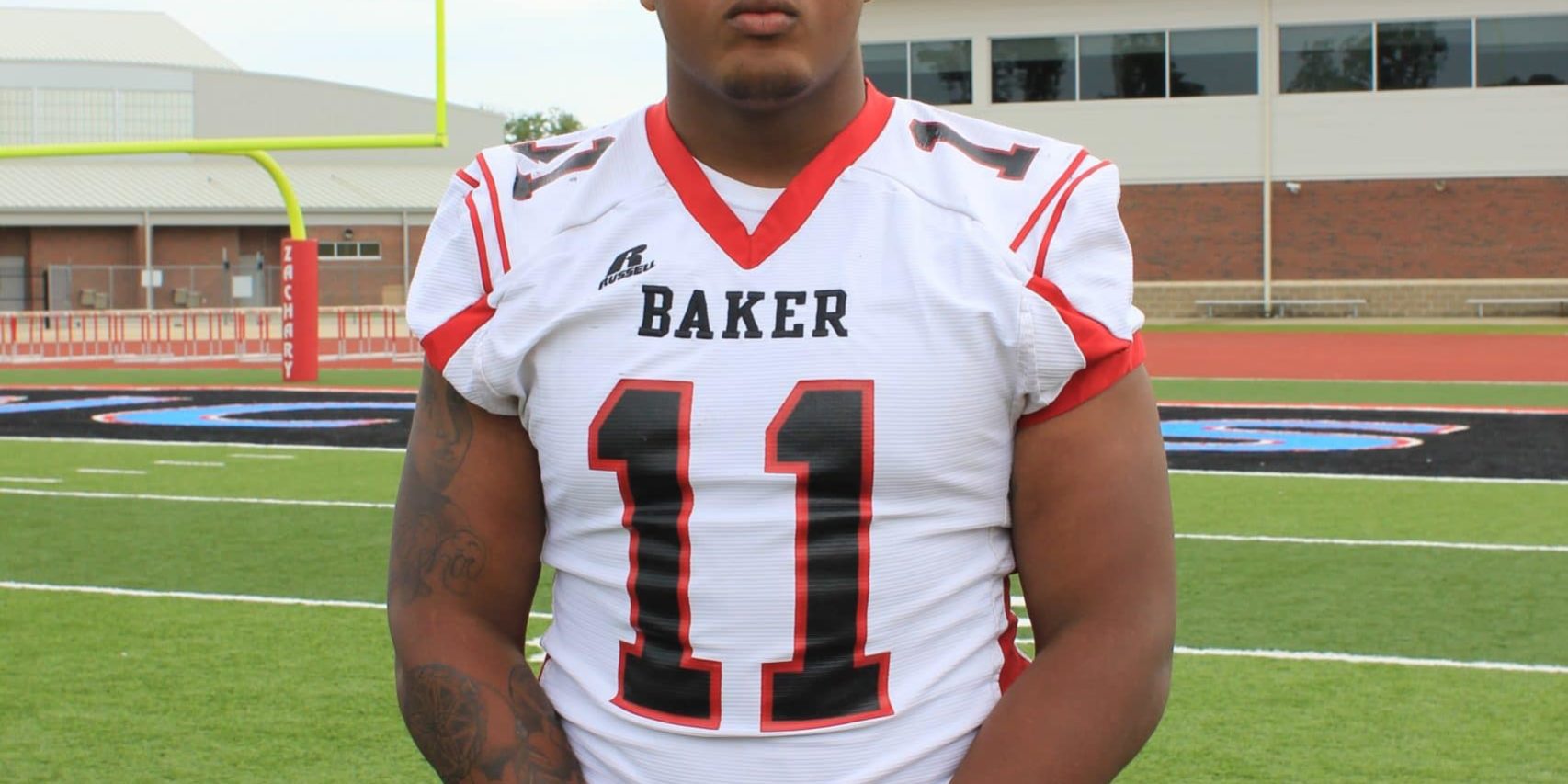 The Baker Buffaloes have not made the playoffs this season, but that does not mean that they have average football players. They had a big time player in senior LB Cameron Heil. Heil is one of the most underrated linebackers in the entire state and is probably one of the top linebackers in the Baton Rouge area. He was undoubtedly the leader of the Buffalo defense last season and has all the tools for a linebacker to be successful at the next level. Heil may not be talked about as much as other highly talented linebacker prospects, but he is a DI player because of his aggressive nature and his ability to lay a hit on an opposing offensive player and wrap them up. He is also a very smart football player that has a high football I.Q. as well as the ability to get in the backfield, read, react quickly, and make the tackle behind the line of scrimmage. Over his career, he has not played in a lot of playoff games and has not had a winning season, but he is a team player that did whatever it took for his team to be successful. Heil also played slot receiver basically on running plays to block on the edge, but he could show that he was a capable receiver as well. He even played some kicker as a junior. This is a do-it-all player that can give opposing offenses fits. Louisiana Football Magazine Editor/T.V. Host Lee Brecheen was really impressed by the talented Baker linebacker as he was named to our 2nd All-Louisiana team at the beginning of the season.

“Cameron Heil is the best linebacker prospect in Baton Rouge,” Brecheen said. “His strength is that his instincts are phenomenal, and his football speed is faster than his 40 time. He looks like he can run a 4.5 but times around a 4.7 or 4.9/40. He is a football player and is a great one. Heil can play D-I and watch out for these DI programs to chase him in the end.”

As of now, it looks like Heil will continue his football at Northwestern State. As impressive and committed Cameron Heil is as a football player, he is even more committed to being better as a student as he is trying to pick his grades up before signing his letter of intent to Northwestern State. We caught up with the underrated Baker linebacker as he talked about his high school football career, the reason why he chose Northwestern State, his skills as a linebacker, and so much more in today’s recruit spotlight!

LAFM: What are your stats and accomplishments while at Baker High School?

LAFM: You are going to play at Northwestern State. What helped make your decision to play for the Demons?

I liked the coaching staff and also, the defense fits me. It is also a small town so everyone is involved with the school.

LAFM: You were named to our All-Louisiana team as a linebacker. What does it mean for you to be recognized as one of the best at your position?

My biggest strengths are my phenomenal instincts and my pre-snap reads.

LAFM: What do you need to improve on when you get to Northwestern State?

I need to improve on being able to flip my hips and also change from one direction to another.

For the hybrid position, it is going to be Tim Williams (former U-High and Alabama linebacker/defensive end). For the inside linebacker position, I model my game after Patrick Willis (former Ole Miss and San Francisco 49er linebacker).

LAFM: You had never been part of a winning season at Baker or had won a playoff game, but what are your thoughts on your career playing for the Buffaloes?

I felt like that I played up to my full potential at Baker.

LAFM: You have played a lot of great offensive players. Who is the best player that you played against and why?

Nick Brossette (former U-High running back currently with LSU) was the best player that I faced because he was just great at what he did.

LAFM: What was your favorite game to play while at Baker, and why does that game stick out in your mind?

My favorite game happened in my sophomore year when we played Livonia in the 1st round of the playoffs. Even though we came up short, we made it to the playoffs for the first time in over eight years.

LAFM: Who are some of the people that you like to thank for helping you be in the position that you are in today?

Of course, I want to thank my parents as well as my coaches including my mentor Coach Lindsey Sanders.

LAFM: What is your advice for next year’s Baker football team?

My advice is to listen to the coaches and buy into the system.

LAFM: What are you going to miss the most about Louisiana high school football?

I am going to miss just playing for my community.

LAFM: Why should NSU fans be excited to have you on their football team?

They are going to get a player with a high motor that is going to give everything on every down.