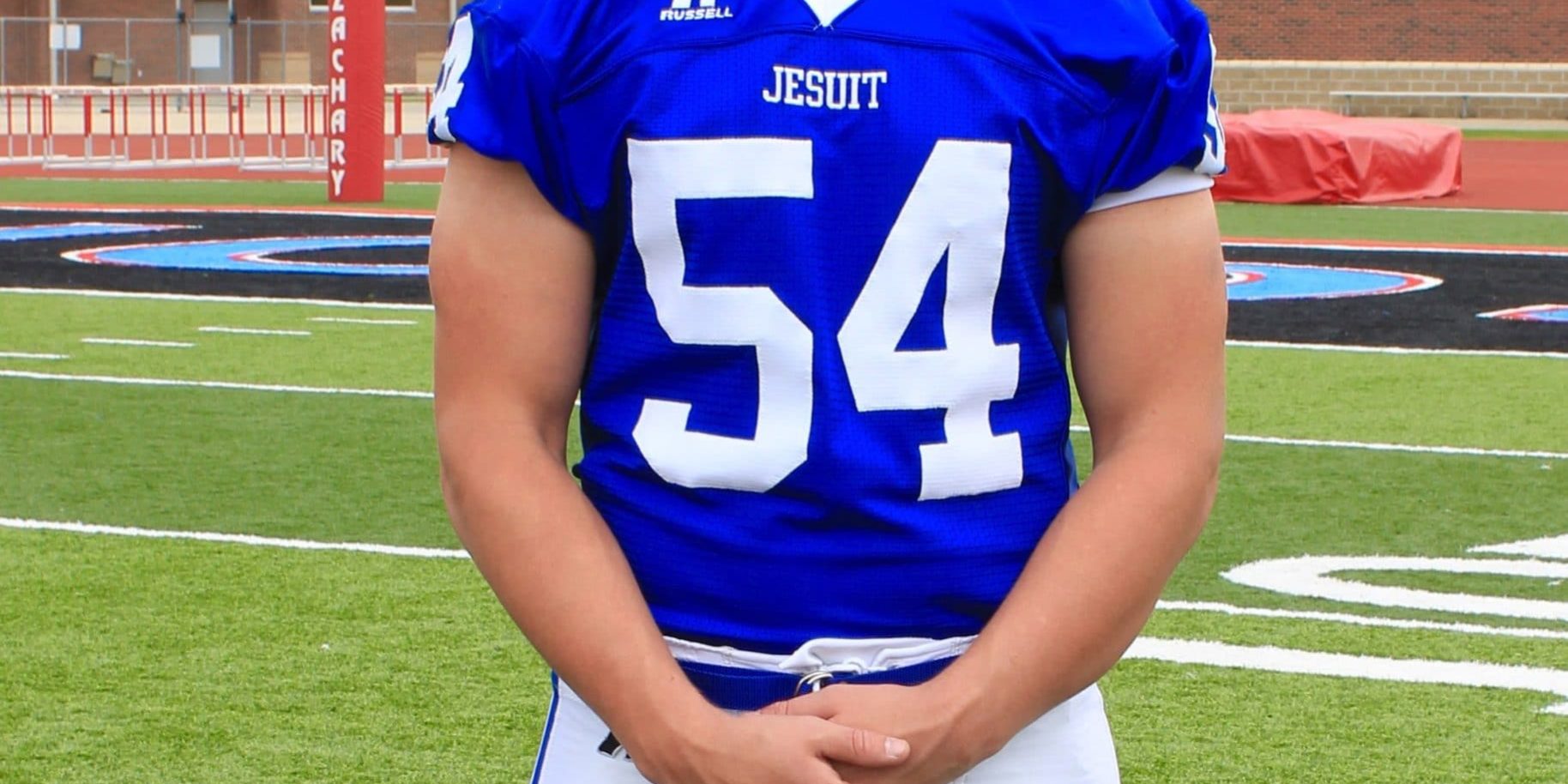 The Jesuit Blue Jays have had their success in recent years with producing linebackers at the next level such as star LB Deion Jones, who played for LSU and is currently with the Atlanta Falcons. This season, the Blue Jays had another linebacker that has a lot of ability and potential in senior LB Cameron Crozier. Crozier is a tough football player who has been very productive for the Blue Jays in only two years as a starter. Over his career, he was not only a tackling machine but also had the ability to get in the backfield and rush the passer. Statistically, he had 300 tackles and 20 sacks, which is pretty impressive for a guy that is still adjusting to playing the linebacker position. He had a huge breakout season as a junior when he had 155 tackles and four sacks. His impressive junior season grabbed our attention, and he was named to our 2nd All-Louisiana Team at the beginning of the season. Louisiana Football Magazine Editor/T.V. Host/Scout Lee Brecheen was reminded of a NFL linebacker when watching Crozier play.

“Cameron Crozier is one of the toughest players in the state,” Brecheen said. “He reminds me of a shorter version of former Saints linebacker James Laurinitas because of his toughness and his speed.”

Cameron Crozier also has had some relatives that were successful in their football careers. His dad Rick Crozier was a football star at Tulane and his uncle also played at Tulane so he definitely has the bloodline to play at the next level. Not only he has the genes, but he has the toughness, instincts, and skills to do so as well. Crozier’s talents caught the attention of many schools and in the end, he decided to sign with the University of South Alabama where he will continue his football career. We caught up with the South Alabama signee as he reflects on his high school football career at Jesuit as well as his thoughts on South Alabama in today’s recruit spotlight!

Jesuit senior LB Cameron Crozier gets his only pick six of his high school career in the annual rivalry game against Holy Cross this past season. (Photo provided by Cameron Crozier)

LAFM: What are your stats and accomplishments while at Jesuit?

I had over 300 tackles, two interceptions including one for a touchdown, and 20 sacks during my career at Jesuit.

LAFM: You are going to play for the University of South Alabama at the next level. What has helped made your decision to play football there, and what makes you excited for the program?

I like the coaches over there especially the defensive coordinator and the linebackers coach. Also, the program seems to be going up right now at a fast pace. I just want to be a part of something special.

That was amazing and one of the best moments of my life. I think about it all the time, and it was just a really good experience. I was very excited to be a part of that.

LAFM: Who are some of your Jesuit teammates that you would like to give a shout out to?

I want to give a shout out to my fellow linebacker Jacob Baxter along with Patrick Spiers, Christian Marks, and Matthew McMahon.

LAFM: You were named to our 2nd All-Louisiana team at the beginning of the season. What does it mean for you to be recognized as one of the best at your position?

It feels really good just to be acknowledged and recognized. It’s awarding to know that people are recognizing all the hard work that you put in and that people notice that you are doing big things. I am honored to receive a recognition like this with all of the other great athletes that are in this state.

My strengths are my instincts and just knowing the game of football. My instincts have always gotten me a step ahead.

LAFM: What are some things that you need to improve on when you get to South Alabama?

Basically, what I am improving on right now is my speed. The coaches know that I already have the size and the instincts to play the position, but keeping my speed up is my main focus.

LAFM: This season, the team had a lot of expectations, but at the same time, played in a tough district and still made the playoffs. What are your overall thoughts on your senior season?

We had high expectations for our senior class, and we definitely didn’t fulfill what we wanted to do in terms of winning. We tried and gave it our all out there every single time. We just came up short in a lot of close games that we thought that we should have won.

LAFM: You have played against a lot of talented players in the New Orleans area. Who are some of the offensive players that stick out to your mind and why?

The best quarterback that I faced against was Justice McCoy (senior St. Augustine QB and Colorado State signee). The best running back that I played against was Bruce Jordan Swilling (senior Brother Martin RB and Georgia Tech signee) because he was a workhorse and the team kept feeding him every time.

LAFM: What is your favorite game while at Jesuit besides the state championship game and why?

This past year’s Holy Cross game was my favorite game because that game brings such a crowd and it is pretty awesome playing in front of that many people. It also was one of my best games because I had the pick six and had a lot of tackles. It was really fun.

I want to thank my dad because he has always been there for me and I always looked up to him because he was a college football player as well. My uncles have both been big influences on me in my athletic career as they were both great athletes. I also want to thank Coach Songy and Coach Roule because I had always a great connection with them.

LAFM: If you had to play one more game at Jesuit, what team would you pick to play against and why?

I would like to play Brother Martin again. They always had the upper advantage on me, and I like to get another shot at them. Most of my friends play over there, and it is just fun playing them.

LAFM: What is your advice for next year’s Jesuit team?

My advice, for them, would be that no matter how the season is going, always try and get better on what you are doing. Also, don’t worry about how many wins and losses that you have. Never give up and keep playing because you never know what will happen.

I am going to miss playing in front of everybody that I grew up with. I always liked going to play in front of my friends and family. There’s also a lot of great competition in Louisiana. I have worked out with some of them and it is cool to not only play with these guys but to play against them as well. It was a pretty awesome experience.

My dad and my uncle both played at Tulane. My brother Quint also played football as well.

LAFM: Why should Jaguar fans be excited to have you on their football team?

I am always going to work hard and do whatever the coach tells me to do. When I’m on the field, I like to have fun as well as make big plays. Hopefully, I can do that over there as well as bring good energy to the program.