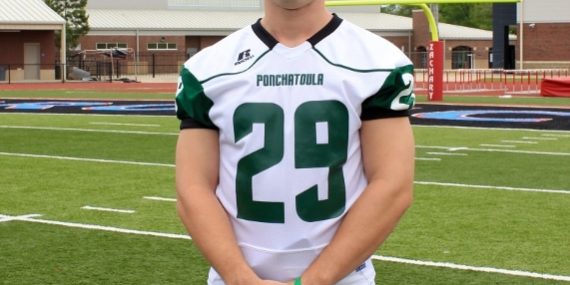 We don’t have a Special Teams Player of the Year award, but if we did, Ponchatoula Kicker/Punter Carson Wyld would definitely be a strong candidate. Wyld is one of the best kickers/punters in the entire state. As a punter, Wyld can be a defense’s biggest weapon as he has the ability to flip the entire field and put the opposing offense in bad field position. As a kicker, Wyld has a really good leg and can deliver in pressure situations. In the 1st round game against Comeaux High School, the score was tied at 17 with only a couple of seconds left in the game. Wyld was called to kick a 29 yard field goal to pretty much ice the game and he did just that to send the Green Wave to the next round of the playoffs. He was also a key factor earlier in that game when he kicked a 41 yard field goal to put his team up ahead. Coming into this season, Carson Wyld made our 1st Team All-Louisiana team as a punter, and he did not disappoint. This season, Carson Wyld did it all. He averaged over 40 yards per punt as a punter and went 7/7 on field goals with a long of 48. An underrated part of his game is his ability for the returner to not return the kick whether it be a punt or a kickoff. 75% of his kickoffs went into the endzone for touchbacks. Looking at kickers and punters, he really does not have any signs of weaknesses to his game. Before the season started, Louisiana Football Magazine Editor and T.V. Host Lee Brecheen had this to say about the strong legged kicker/punter from Ponchatoula.

“Carson Wyld has a cannon for a leg,” Brecheen said. “In his junior year, he averaged an impressive 44 yards per punt and 75% of his kickoffs were touchbacks.”

Before today, Carson Wyld had some offers and was figuring out what college that he was going to commit to. Well, Carson Wyld has made his decision as he has committed with Louisiana Tech. The Bulldogs have themselves a special kicker/punter that can be a big time weapon for years to come. We caught up with the Ponchatoula and Louisiana Tech commit as he talked about his ability as a kicker/punter, making the winning field goal in the playoff game against Comeaux High School, committing to Louisiana Tech, and so much more in today’s recruit spotlight!

Ponchatoula K/P Carson Wyld has not only a strong leg but a consistent leg as he averaged 43 yards and 44 yards perspectively during his two years playing football for Ponchatoula. (Photo courtesy of the Ponchatoula High School yearbook)

I averaged 43 yards punting my senior season. I also went seven for seven on field goals with a long of 48. Also, 75% of my kickoffs went for touchbacks and I averaged 44 yards per punt in my junior year.

LAFM: You have some offers from other teams, but what is your top school as of now?

LAFM: What are some things when you looked at Louisiana Tech that helped you make your decision?

I looked at the academics and how I would fit in the program.

LAFM: What is your longest punt (hangtime and distance) that you had in practice or in a game?

My longest punt is 63 yards with a 5.1 second hangtime.

Ponchatoula K/P Carson Wyld is no slouch as a kicker either going 100% on field goal attempts including a game winning field goal in the 1st round of the playoffs against Comeaux High School. (Photo courtesy of the Ponchatoula High School yearbook)

LAFM: What is your longest field goal that you ever had in a practice or in a game?

I believe my strength to my game is how consistent I am. Going 100% on field goals as well as averaging 43 and 44 yards per punt in two seasons is pretty consistent.

I need to improve on my kickoffs and need to get my touchback percentage higher.

LAFM: Who is the college or NFL kicker or punter that you model your game after?

LAFM: Where did you learn how to kick and how did you get involved with the sport of football?

I learned how to kick and punt the summer before my junior year at a camp.

LAFM: In a playoff game this season against Comeaux High School, you actually won the game with a last second field goal. What were your thoughts before the kick and did you approach it differently from any other kick?

I approached the kick just like any other kick. It was only 28 yards so the distance wasn’t a problem. I was just making sure my snapper and holder got it back there for me.

LAFM: What are your thoughts on your senior season as a whole?

I believe I really showed in my senior year that I am a college specialist.

I didn’t play football until my junior year. That was my first ever season playing football.

LAFM: You were named to our 1st team All-Louisiana team at the beginning of the season. What does it mean for you to be recognized as one of the top players at your position?

I think it’s a tremendous honor. It’s awesome when all the hard work you put in is recognized by others.

I definitely like to thank my parents for bringing me to camps during the off-season. I’d like to thank my coaches especially my head coach Hank Tierney for giving me the chance to play football.

LAFM: Why are you the top kicker/punter in the state?

I believe that I am the top punter/kicker in the state not only because of my work ethic, but because of my mentality. I’m always focused on getting better and finding new ways to improve my game.