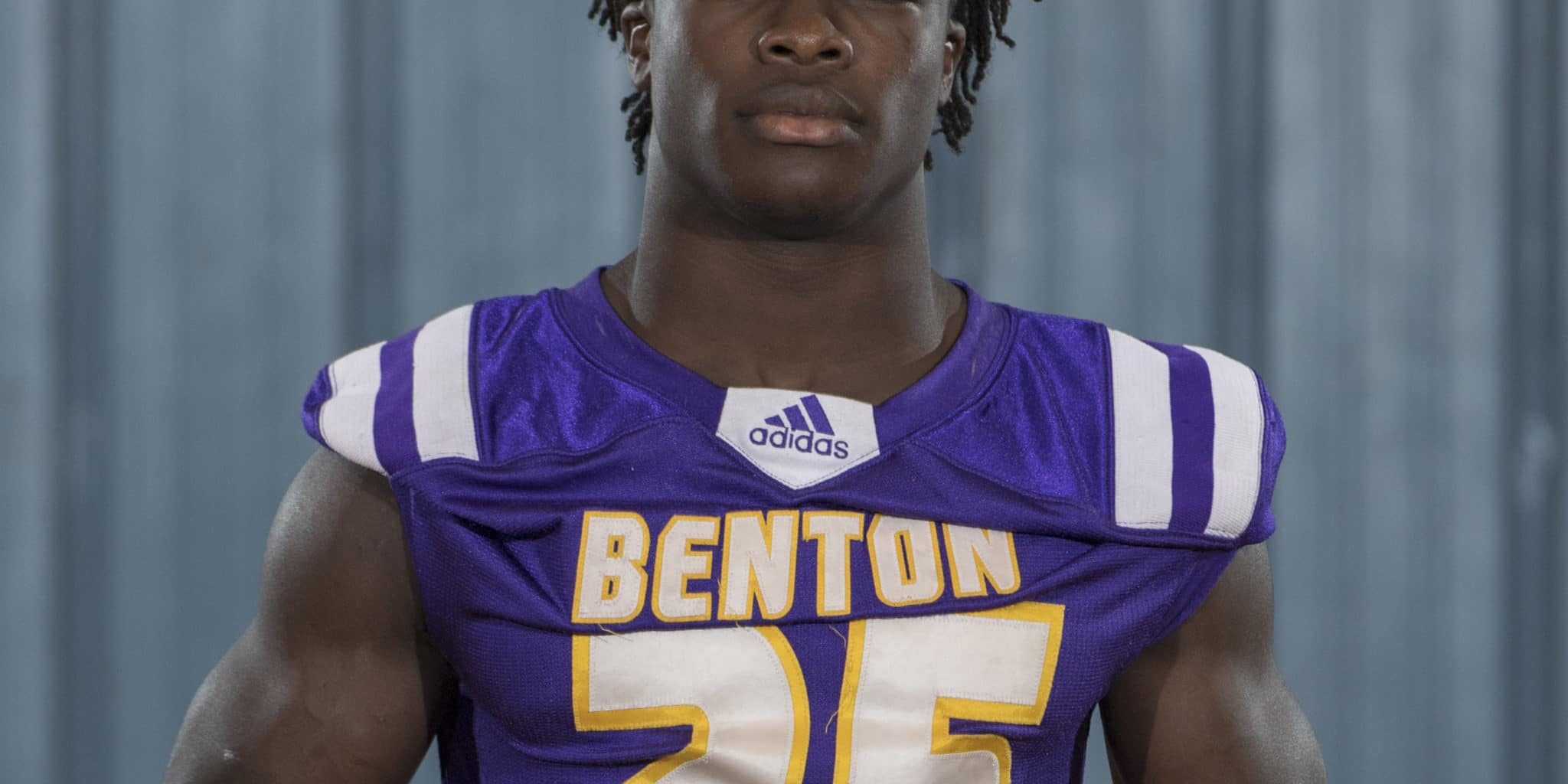 Despite his average height compared to other linebackers, Jordan Myles is still one of the best leading defensive players for the Benton Tigers. He has been part of the Tigers varsity football team since his freshman year where he was a second string player and part of the special teams. As a sophomore, he was recognized as an All District and All-Parish Linebacker in 2015. The year after, as a junior, he was recognized as All District again. Even though Myles is the starting linebacker for the Tigers, he is able to play other positions, like running back, thanks to his agile ability to adapt to different situations in the game. Off the field, Myles also focuses on his academics accumulating a 3.5 GPA and emphasizing the term “student athlete.” Louisiana Football Magazine’s recruit expert Lee Brecheen likes Myles’ versatility and effort when he is out making plays on both sides of the football for the Tigers.

“The Tigers defense has eight starters lead by DB Sam Simmons, LB Jordan Myles, DE Brooks Cam, and Cole Horton,” Brecheen said. “Jordan Myles is not the biggest guy at about 5-8, 190, but he plays very hard and has big time 4.55/40 speed.”

Yesterday, with the help of Jordan as linebacker, the Tigers outlasted the North DeSoto Griffins 34-33. Benton improved to 7-0 overall and 4-0 in district. So far this season, Myles has had four sacks, an interception, a pick six and has recorded about 20 tackles. He has done it all for the Tigers and is a big reason on why the Tigers are one of the highest ranked teams in 4A. We can’t wait for Jordan Myles to keep making big plays and leading the Tigers to a very strong postseason showing. In today’s recruit spotlight, we caught up with the All-District linebacker as he talked about his biggest strengths, what he needs to improve on the most, the successful first half of the season, his interesting talents off the football field, and so much more!

Some of the biggest strengths to my game is being able to be a very coach able player. Being able to submit to the coaches and correct mistakes immediately aids in my game. Also, another big strength is being a very versatile player, which allows me to be able to play anywhere on the field that will best help the team.

Although I do enjoy playing on the defensive side of the ball because that is where I am needed to better the team and I love being able to hit people, one of my favorite positions to play is running back. It is a position I have played since I was a little kid on up through middle school, and I really enjoyed playing it.

LAFM: What were your most memorable accomplishments while at Benton High School?

My most memorable accomplishment was being able to be on the varsity football team my freshman year. Although I was second string behind a three year starter Jordan White, I was still on special teams, and gave our offense a great look in practice on scout team.

The most interesting fact about myself would be my interest in theater and music. I was the Beast in our school play, Beauty and the Beast, and I am able to sing, play piano, play the drums, and also the guitar.

LAFM: The Tigers lost in the quarterfinals of playoffs to Edna Karr. What are your thoughts on how the end of the season turned out as well as what improvements should be made for this year’s season?

Last year’s season went really well. We did lose to Woodlawn and Minden in district, as well as Edna Karr in the quarter-finals. All are very worthy opponents. Woodlawn and Minden lasted a good bit in the playoffs and Edna Karr ended up going all the way winning state. This year, as a team, we are looking more in sync then ever. Defensively, we have improved on being able to work together and not do our own thing as well as offensively, being able to put up points at will.

LAFM: What are some things that you have picked up from Coach Moore that has helped you in your game today?

Being around Coach Moore has helped me become a smarter football player most definitely, but, not only that, he has helped my walk with Christ for he is a good Christian man, who leads by example and watching him and hearing his words has helped me out tremendously with my faith.

My advice, for next year’s team, is to not feel entitled to anything, and to also strive for greatness everyday. Being apart of this program, I have learned that we have a history of excellence, but, since you have Benton on your jersey does not mean anything will be handed to you. We have been successful through the hard work that has been put in. So everyday, continue to work harder to continue to put this program on top.

I have not received any offers yet, but there are some schools interested in me, and as far as the college I personally want to attend, I honestly do not have a preference at the moment. I am just keeping my options open and continuing to be prayerful considering my college career because scholarship or not, I will play college football.

When it comes to areas I need to improve on, I would say my coverage skills. Just being able to play off man in case an offensive coordinator wants to take advantage of me because I am a linebacker, but, little will he know I can cover like a defensive back.

A NFL player, who I look up to is London Fletcher (John Carroll/Washington Redskins), who did not let his height of 5’10 stop him from being one of the most dominate linebackers to ever play that position. I just feel I could have a similar story to his when it comes to being looked down upon by some schools based off of size but, he played the game as if he was 6’4 and that is exactly what I aim to do.