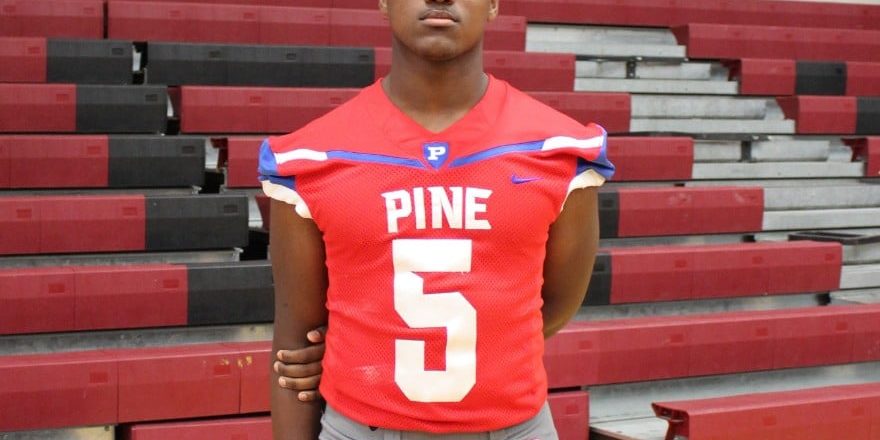 Yesterday, we profiled Sulphur senior offensive lineman Kaleb Hogg and how his blocking was a big part of the Golden Tor’s rushing attack. However, it can work the other way as well as a good running back can make the offensive lineman’s job much easier. Case in point, Pine High School has one of the best rushing attacks in the state led by one of the most underrated offensive line groups in the state as well as a deep running back rotation that features the senior runner Ja’kyran Handy. At 5-11, 210, Handy is a powerful runner that has 4.6/40 speed. Over his career at Pine, he has made the most of his opportunities in a crowded backfield that also includes Delvric Dillon and Damarea Odom. Handy was named All-District and had back to back 1,000 yard seasons. Even with those numbers, he was unselfish enough to share the load. The competition between the three backs provided motivation every time the senior got on the football field.

“I just want to thank my two wing backs Delvric Dillon and Damarea Odom for always being there for me and pushing me to get better,” Handy said.

The love for his teammates does not end there with the running back group, but also with the big offensive linemen as well.

“I want to give a shout out to my offensive linemen Brennon Kelly, Donovan Kreyssie, and Jared Berry,” Handy said. “I always loved running behind those guys.”

Even though Handy is as unselfish as it comes, he is not afraid to admit that he has the talent to be an all-around running back.

“I am a great running back,” Handy said. “I can run between the tackles and I can receive the ball too. I can play multiple positions and do whatever it takes to play on the field. I am working hard.”

Handy’s hard work has attracted some colleges around the state and around the country, but the Pine senior running back has received no offers as of now.

“Currently, I have no offers, but I have been in contact with some schools such as Southern, Southern Miss, and I have received a preferred walk-on offer from ULL, but I am still looking,” Handy said.

For Handy, there a couple of factors that play in when choosing a school to play for whether if they award a scholarship or not.

“What sparks my interests is a great coaching staff, how comfortable I feel on campus, and the way the playbook looks for myself,” Handy said.

Handy is a good student in the classroom as he has a 2.5 GPA and a 18 ACT score, but Louisiana Football Magazine’s recruiting expert Lee Brecheen believes that the 17 year old from Pine High School could fit in greatly with a junior college school.

“Ja’kyran Handy is a 5-11, 210 running back that runs with power, speed, and high effort,” Brecheen said. “He is a pretty athletic guy and is a late bloomer. He could start with a JUCO college to further develop his skills and then go for a chance to sign with a DI or I-AA college within two years.”

Handy is actively preparing now for playing football at the next level as he is continuing to improve both his strengths and weaknesses with a little bit of help in the off-season.

“I would say the biggest strength to my game would be my vision,” Handy said. “I can see the holes really good. I model my game after Ezekiel Elliott (Ohio State/Dallas Cowboys) and how he uses his vision with his game, but in order for me to be a complete running back, I need to improve on my blocking. I am working with a trainer right now in Covington. I know I have to be prepared once I get to the next level.”

Coming off a great junior year in 2016 in which he had over 1,200 yards rushing and 20 touchdowns to help lead the Raiders to the team’s best season in program history with seven wins and a playoff victory, Handy once again had a 1,000 yard season and helped lead the Raiders to back to back seven win seasons along with a playoff victory against West St. Mary before falling to Many in the second round of the Class 2A playoffs this season. For Handy, it was not the ending that he wanted, but is very optimistic about the progress the team is making and what the future holds.

“As long as this team stays focused and puts their work in the weight room, I believe that the Raiders will have a great season next year,” Handy said.

It was a special senior season for Handy as he stated that his most memorable game was the West St. Mary playoff win in his senior season. Keep in mind, that this comment came from a player who happened to score eight touchdowns in one game when he was a junior. It shows a lot of how much of a competitor he is and how badly he wants to win. Helping the Pine Raiders’ football program take off has been very satisfying for Handy as he will always remember the wins and the touchdowns, but how fun it really was to play in a run heavy offense.

“It was great because we were comfortable with each other,” Handy said. “It was a fun offense to play in just because it was a run first offense. My favorite play would be running the 24 dive right behind Brennon Kelly.”

Brennon Kelly and the offensive line paved the way for Handy to run through holes, but it was his mother that helped pave the way in order for Handy to be in this position today.

“I want to thank my Mom for putting up with me and my sister all by herself,” Handy said. “Our dad was not there, but for me, she gave me motivation to be where I am today.”

The Pine senior running back’s future is not clear as of right now, but for whoever takes a chance on Handy in the end will get themselves not only a versatile play maker but a leader that is not afraid to go after something he believes in and will fight for.