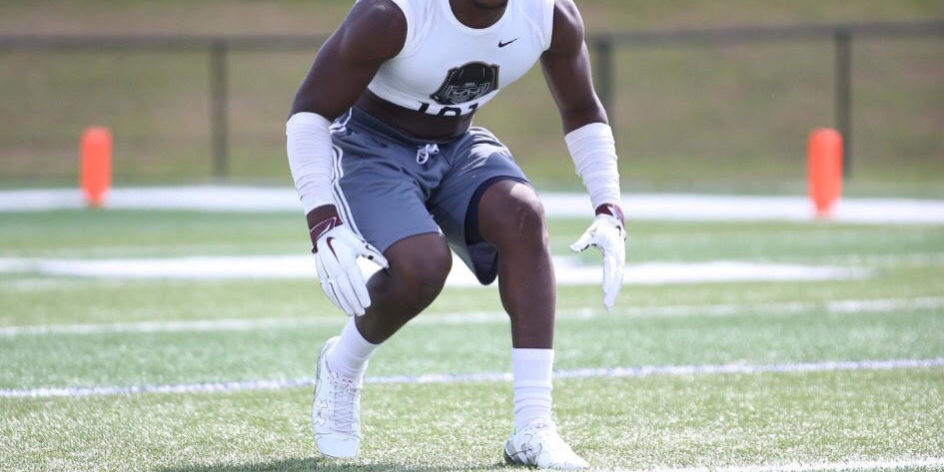 One of the most gifted and talented defensive backs to come out of this year’s class is none other than Plaquemine senior FS Todd Harris. Harris entered the season as one of the best at his position, and it clearly showed this season. He was one of the key players that has helped the Green Devils become a mainstay in Class 4A. This season, he was an integral part in the team’s success racking up 91 tackles, three interceptions, three pass breakups, three forced fumbles, and a fumble recovery returned for a touchdown. The Green Devils won the district championship with a 9-4 record and made it all the way to the Class 4A quarterfinals where they eventually lost to McDonogh 35. Over his career, Harris had some pretty individual accomplishments along with being a part of a winning team. He was named 1st team All-District for three years in a row, 1st Team All-State, District MVP, and was even named an Under Armour All-American. As far as playing the run and the pass, he can do both, and he can do it well. Harris is also not afraid to lay a hit on anybody, and opposing receivers definitely watched out when they saw #6 coming at them full speed. Before the season started, Harris made our preseason All-Louisiana team and he did not disappoint as he was one of our 4A Defensive Player of the Year Candidates at the end of the football season. Louisiana Football Magazine Editor/T.V. Host/Scout Lee Brecheen knows that the former Plaquemine safety has a lot of talent.

“Todd Harris looks the part as a strong safety,” Brecheen said. “He has all the physical tools to be great: 40 time, very long, etc. If Harris wants to be great, he can be.”

He will have a great opportunity to improve on his game at LSU, which is known as DBU because of the great defensive backs that have gone through the program in recent years such as Patrick Peterson (Arizona Cardinals CB), Morris Claiborne (former Dallas Cowboy CB currently with the New York Jets), Tyrann Mathieu (Arizona Cardinals FS), Jamal Adams (NFL 1st Round Prospect), etc. He will also be the 2nd Plaquemine defensive player to sign with the Tigers in recent years joining former LSU DT Davon Godchaux. The Tigers will be getting another defensive stud who will try and add his name to the list of players at DBU. We caught up with the LSU signee as he talked about his high school career, the reason why he wanted to play football for the Tigers, the defensive back he models his game after, and so much more in today’s recruit spotlight!

Plaquemine senior FS Todd Harris (6) has shown his skills as a defensive back against some of the best receivers in the state including former Lutcher WR and TCU signee Al’Dontre Davis (2). (Photo provided by Todd Harris)

LAFM: What is your max bench press, max squat, 40 time, and vertical?

LAFM: What are your stats and accomplishments while at Plaquemine?

LAFM: You were being offered by a lot of DI schools. What has helped you make your decision to play for the Tigers?

It was a dream school for me, and I wanted to be apart of DBU. Also, I see it as a great opportunity to not only get to the league quicker, but also get my degree at a great university.

LAFM: Like you said, LSU is referred to being DBU over the last couple of years. What does it mean for you to be a part of a position group that has been the most successful in producing NFL players at LSU?

It means a lot after seeing the great DB’s come and go year after year at LSU. It shows me that I have to perform at a high level to be apart of that group and represent it.

The biggest strengths to my game are covering skills, tackling, being aggressive in the box, and just giving it my all on every snap of the game.

LAFM: What are some things that you need to improve on when you get to LSU?

I need to improve on understanding concepts, recognizing formations quicker, adjusting to the college level speed, my technique, footwork, and anything else to make myself a better student-athlete.

LAFM: You have dealt with the recruiting process yourself as a heavily recruited player. What is your advice to other highly players that will have to go through the same process that you went through?

Just stay humble and never second guess your decision. Go somewhere because that’s where you can see yourself at and nobody else. Also, continue to keep giving God all the glory and just stay focus.

Plaquemine senior FS and LSU signee Todd Harris will be the 2nd Green Devil to sign with the Tigers in the last five years. (Photo provided by Todd Harris)

LAFM: Who is the college or NFL defensive back that you model your game after and why?

Jamal Adams (former LSU defensive back currently a 1st Round NFL Draft Prospect) because I love how passionate he is behind the game, and he continues to play with a lot of energy every game.

LAFM: Last season, the Green Devils had a good season winning nine games, the district championship, and losing a very close game to McDonogh 35 in the quarterfinals. What are your thoughts on the season as a whole?

I felt like we had a great season. I wish we could have made it to the Dome, but I’m glad that I was able to play my last game with my brothers in a very good game.

LAFM: What is your advice for next year’s Plaquemine team?

Just stay focus, be humble, believe in God, and everything else will work its magic.

LAFM: Who are some artists that you like to listen to before games?

I like to lift weights, sleep, ride four wheelers, play video games, and hanging out with my bros.

LAFM: What are you going to miss most about high school football?

I am going to miss just the Friday Night lights. I don’t think anything can top my high school experience.

I’m shy and very quiet. I don’t like to stand out.

I want to thank my mom, dad, aunts, grandparents, mentors, coaches, and all of my support system.

LAFM: What makes you unique as a defensive back?

I’m not scared to tackle and I play every down like it’s my last.

LAFM: What is your message to Tiger fans next season?

I just want to be another great Tiger for the state of Louisiana and win a national championship with my team!