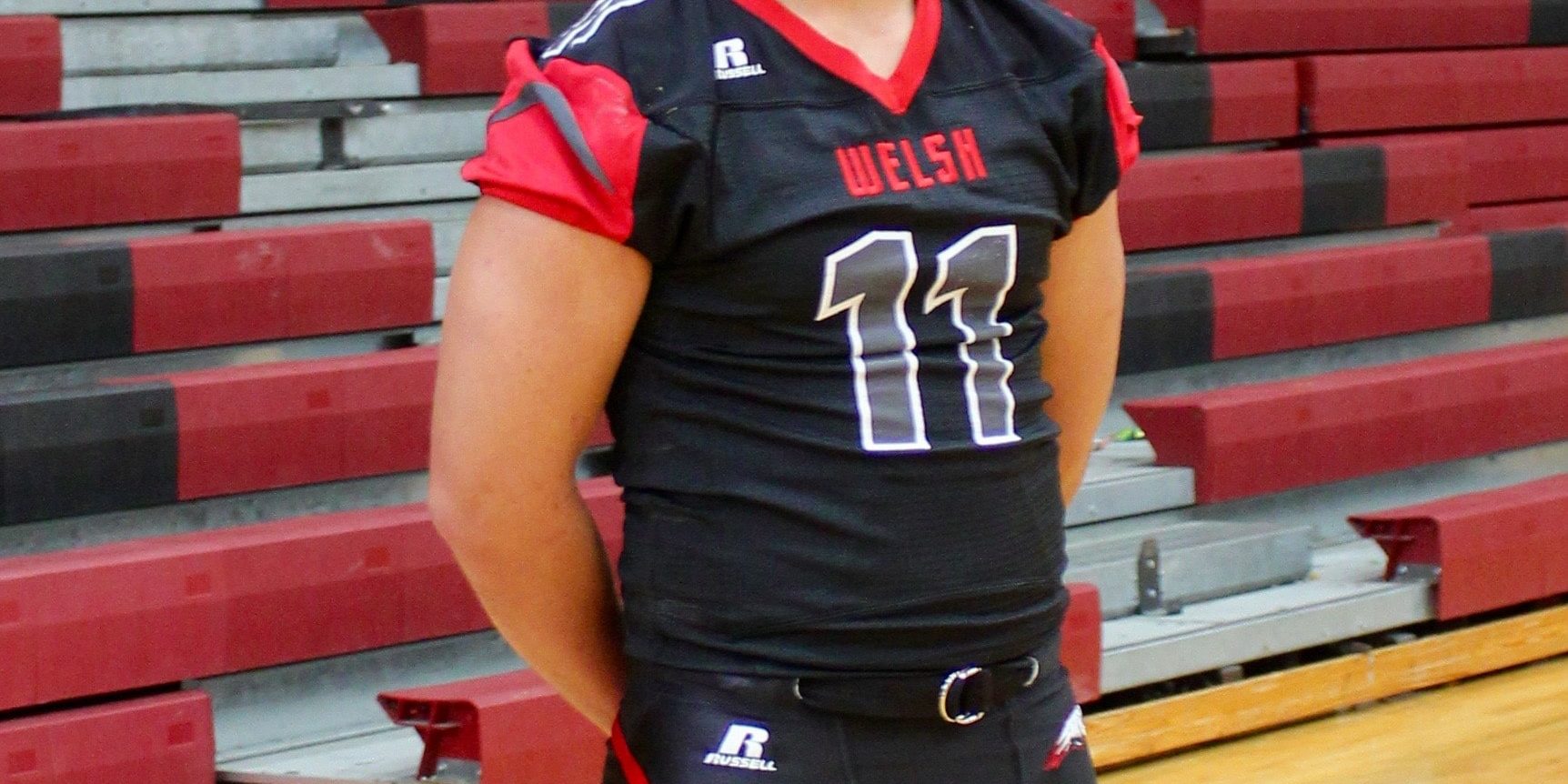 With the help of fullback and tight end Pearse Migl, The Welsh Greyhounds are looking a lot like last year with an undefeated season so far at 6-0. As a fullback, Pearse Migl gets to play different positions which he has the ability to execute effortlessly thanks to his 6’1, 230 built. As a tight end, he reinforces the pocket protecting the quarterback Zach Hayes by not letting anyone through. Pearse Migl has been part of the Greyhound varsity football team since his sophomore year. As a sophomore, he was the starting tight end and defensive end for the Greyhounds. So far this season, Migl has shown his athletic ability by catching two touchdowns, 92 catches, seven tackles, and 175 total receiving yards. His best game was against Kaplan High School where he made his first touchdown of the season along with some great blocking and five catches. Thanks to one of Pearse Migl’s touchdown catches, the Welsh varsity football team won their first home non-conference game against Kaplan by a score of 27-18. Off the field, Pearse maintains a 3.8 GPA proving his ability of being an excellent student-athlete. Louisiana Football Magazine’s recruit expert Lee Brecheen believes that Migl is one of the best blockers in the state this season.

“FB/TE Pearse Migl is one of the best fullbacks blockers in Louisiana with great size at 6’1, 230,” Brecheen said. “He also moves well when he does have the ball in his hands with 4.8/40 speed.”

Thanks to his skills, Pearse Migl has grabbed the attention and interest of a few colleges to play at the next level. Over the summer, Pearse received an offer from Millsaps College in Jackson, Mississippi, and looks forward to possibly committing to the D-III school. We look forward to watching the Welsh senior hopefully leading the Greyhounds again to the Dome at the end of the season. In today’s recruit spotlight, we caught up with the senior Welsh tight end/fullback as he talked about his biggest strengths, being a part of a successful Greyhound team the last couple of seasons, the one offer that he has received already, and so much more!

I think the biggest strengths of my game are my intelligence of the game and how to adjust to it as well as my physicality and strength that comes with my experience of playing.

My favorite position to play is my position, Fullback/H-back, because I get to do a little bit of everything on offense: run the ball, catch the ball, and block.

LAFM: What were your most memorable accomplishments while at Welsh High School?

My favorite accomplishment is probably saying that I played on a semi-final football team, which is the third in school history I believe. Next, I think I would have to say that I have never once had lower than a “B” in a class and I will have close to a 4.0 when I graduate.

Some people know that my brothers are musicians, but I want people to know that the musical gene has skipped a generation and that I cannot play an instrument or sing in any way possible.

LAFM: The Greyhounds had an undefeated regular season until the lost in the quarterfinals playoffs against Rayville. What are your thoughts on how the season turned out as well as what improvements should be made for this year’s season?

It was a disappointment to be upset that early in the playoffs, but there are a few positive points we took from the loss. It was a good experience for the younger guys we had on the team. We have seen what happens if you take a team for granted and we have all worked to fix those mistakes we made in the off season. I feel we have definitely improved from last season because everyone has worked hard in the weight room and in the film room during the off season. I believe we should work together more as being a team in school, not just on the field.  We play a big schedule this year and we need everyone to step their game up a little bit more each week to be successful.

I believe the best athlete I have faced is Gavin McZeal (Jennings). He played defensive end against us and I was hitting him all night. He is just a solid man; he’s fast, strong, athletic, and smart.

LAFM: What are some things that you have picked up from Coach Richardson that has helped you in your game today?

I think I’ve learned from him to stay calm when the game is big. I’ve learned to be disciplined in what I need to do on the field.

LAFM: What is your advice for next year’s Greyhound football team?

I want them to work hard in the off season and that if they can put their minds to it, anything is possible. I want to tell them to have fun every day of the season. There’s nothing better than Friday night lights.

I have received one offer so far to play at Millsaps College in Mississippi as well as interest from other schools. I am considering playing for them as they are my first and only offer right now.

I like to try to model my game after former LSU fullback J.C. Copeland. He was such a dominant player in the run game with his blocking and can go unseen in the passing game and hurt a defense.

My biggest blessing is my mother. She is such an amazing person and has worked so hard for me and my brothers to grow up to be successful young men. My brothers are next in line for my thanks because they taught me much of what I know now in school and on the field.