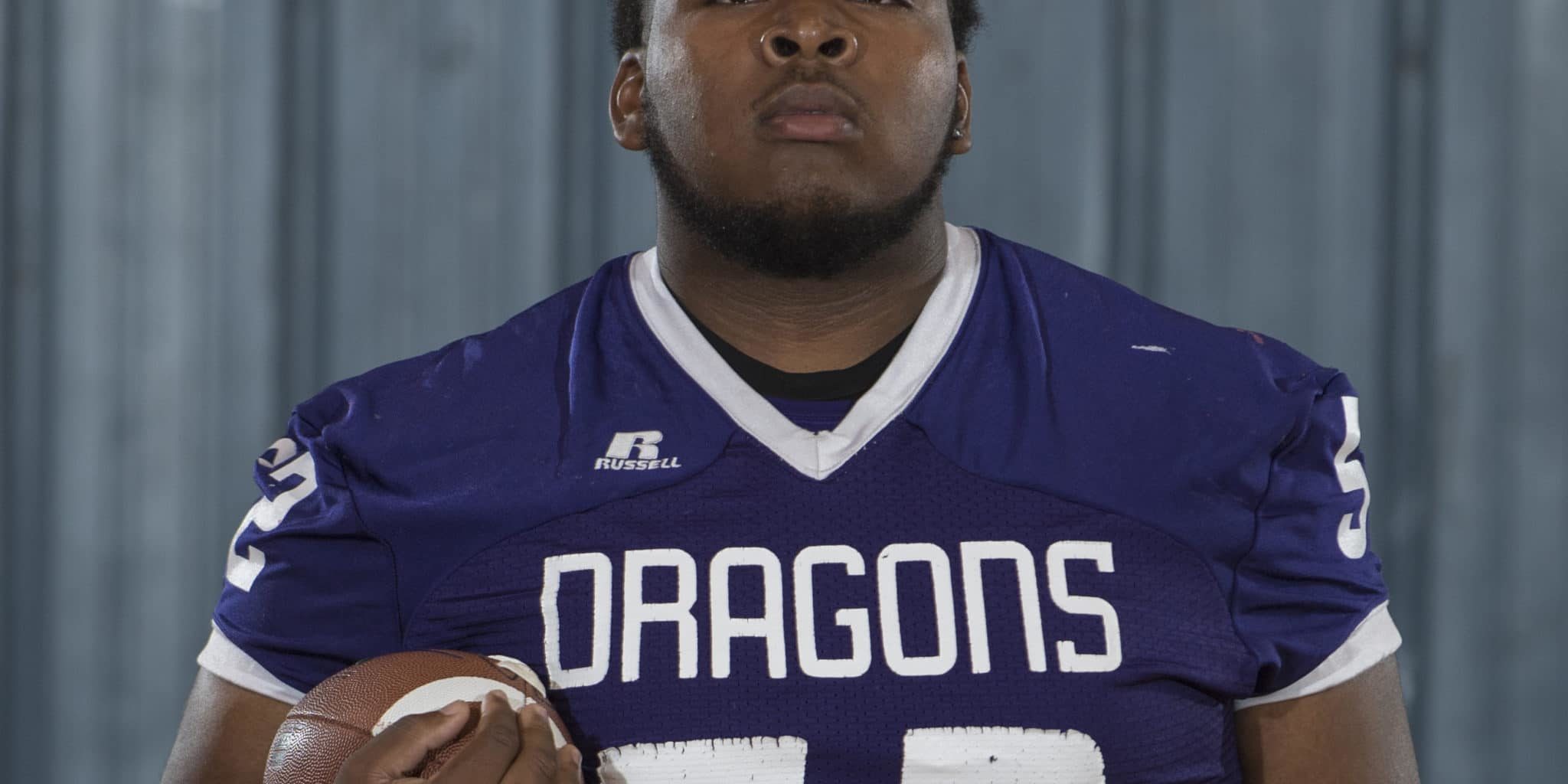 As a defensive player, you want them to rush the passer (if they get past the offensive linemen blocking them), and stop running plays directed at the middle of the line of scrimmage. This is exactly what Randy Gayden does so well for the Mangham Dragons. At 6’2 and 300 pounds, Gayden is built to play multiple positions that compliment his game as a player as well as his team. Randy Gayden started as a freshman in 2014 on the offensive line and has worked his way up to dominating plays as a defensive tackle. Watching Gayden play, one notices his determination to find his opponent and charge towards the ball. Even after tackling one of his opponents, Gayden will find another player to tackle until the play is completed and called by the referee. Not only does Randy have the physical ability to play the game, he also has the passion and dedication to play the game at the best of his ability as one can see in his responses to our questions. Louisiana Football Magazine’s recruiting expert Lee Brecheen has a lot of good things to say about the senior Mangham defensive tackle.

“In 2015, I saw a strong kid who starts the nose guard spot and really gets after you,” Brecheen said. “He is still growing mentally and physically into a great defensive player.”

Last football season, the Mangham Dragons were 6-6 losing in the second round of the Class 2A playoffs against Madison Prep Academy. This season, the Dragon’s defense is reassembled and ready for another long run at the playoffs. This will be possible with seniors DE Andrew Sevier, DT Madison Woodard, LB Austin Payne, CB Brandon Haynes, and of course, DT Randy Gayden. We can’t wait to see how Randy Gayden leads the team once again into playoffs as he hopes to continue proving his ability of being an asset to the Dragons. We hope this season also brings Randy many opportunities as hopes to continue his football performance after high school.

LAFM: What are the biggest strengths to your game or what do you think makes you stand out as a defensive tackle?

My tenacity in making plays helps me stand out.

LAFM: What is your favorite play as a defensive tackle?

I wouldn’t say I have a particular favorite play. I like to run them all.

LAFM: What have been some of your best accomplishments while at Mangham High School?

I’m a team player so my biggest accomplishment to me is me motivating the younger players that are coming up behind me.

What a lot people don’t know about me is that I was diagnosed with a learning disability, but I don’t let it define me or stop me from achieving my goals.

LAFM: What are your thoughts on how the end of the season turned out as well as the season as a whole?

We have a young team and we have a lot of freshmen stepping up.  As it looks right now, I believe we will have a great season.

My freshman year when we played against Sterlington was the game that stuck out to me the most. The last play of the game got shook up by Sterlington’s defense so our receiver improvised and threw the ball to another receiver for a touchdown and the win.

As a defensive tackle, the best offensive team I played against was Madison Prep.

LAFM: What are some things that you have picked up from Coach Tharp so far that has helped you improve at your game?

Coach Thorpe always says, “play hard, play physical until the last snap.” My defensive coach, Coach Wilcher also tries to get them off the field on third down.

LAFM: Would you want to pursue your football career in college and if so, where would you see yourself doing so?

I model myself after Jonathan Allen (Alabama/Washington Redskins) because of his game technique and his game attitude.

The main one is my mom, being a single mother was hard, but she always made a way and pushed me to work hard.